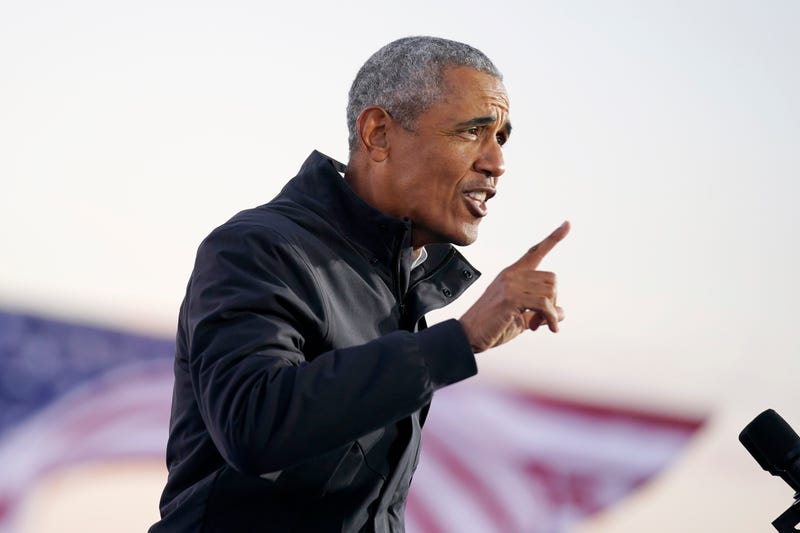 DETROIT (AP) — Calling Joe Biden his “brother,” Barack Obama on Saturday accused Donald Trump of failing to take the coronavirus pandemic and the presidency seriously as Democrats leaned on America's first Black president to energize Black voters in battleground Michigan on the final weekend of the 2020 campaign.

Obama, the 44th president, and Biden, his vice president who wants to be the 46th, held drive-in rallies in Flint and Detroit, predominantly Black cities where strong turnout will be essential to swing the longtime Democratic state to Biden's column after Trump won it in 2016.

“Three days until the most important election of our lifetime — and that includes mine, which was pretty important,” said Obama, urging Democrats to get to the polls.

The memories of Trump's win in Michigan and the rest of the Upper Midwest are still searing in the minds of many Democrats during this closing stretch before Tuesday's election. That leaves Biden in the position of holding a consistent lead in the national polls and an advantage in most battlegrounds, including Michigan, yet still facing anxiety it could all slip away.

As of Saturday, nearly 92 million voters had already cast ballots nationwide, according to a tally by The Associated Press. Tens of millions more will vote by the time polls close on Tuesday night.

The former president hammered on Trump's continued focus on the size of his campaign crowds.

“Did no one come to his birthday party when he was a kid? Was he traumatized?” Obama said in a mocking tone. “The country’s going through a pandemic. That’s not what you’re supposed to be worrying about."

Throughout the day, Trump and Biden, both septuagenarians, threw stinging barbs at one another that at moments verged into schoolyard taunt territory.

Speaking in Flint, Biden joked of Trump, “When you were in high school, wouldn’t you have liked to take a shot?” He also mocked the president as a “macho man."

Trump, too, on Saturday suggested he could beat up Biden if given the chance and suggested the former vice president wears sunglasses to cover up “surgery on the eyes.”

“He’s not a big guy,” Trump said of Biden. “A slight slap, you wouldn’t have to close your fist.”

Later in Detroit, Biden ridiculed Trump for calling himself a “perfect specimen," called him Russian President Vladimir Putin’s “puppy,” and joked about a New York Times report that showed Trump had spent $70,000 on hair care.

As Biden campaigned in Michigan, Trump made an aggressive play for pivotal Pennsylvania, focusing largely on his white, working-class base in four rallies, the last ending about 10 p.m. as temperatures fell to near 40 degrees.

“You know,” Trump told supporters in Montoursville, "if we win Pennsylvania, it's over. That's why I'm standing up here."

At an early evening rally in Butler, Trump announced that he had issued a memorandum that calls on government agencies to determine fracking’s impact on the economy and trade and the costs of banning the oil and gas extraction through fracking.

The president has repeatedly charged that Biden will end fracking — a big industry in Pennsylvania and other states — even as the former vice president has said that he does not support a ban on fracking.

“In other words, if one of these maniacs come along and they say we’re gonna end fracking, we’re gonna destroy the Commonwealth of Pennsylvania," Trump said in announcing his memorandum. “You can say, sorry about that."

Earlier in the day in a small town in Bucks County on the eastern edge of the state, Trump raised baseless concerns about election fraud, pointing specifically at Philadelphia, a city whose large African American population is key to Biden's fate in the state.