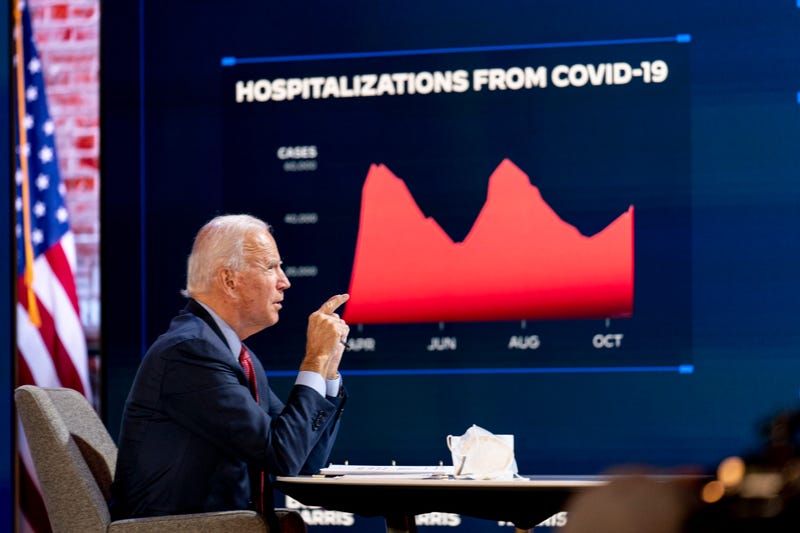 BULLHEAD CITY, Ariz. (AP) — Focused firmly on COVID-19, Joe Biden vowed Wednesday not to campaign in the election homestretch “on the false promises of being able to end this pandemic by flipping a switch.” President Donald Trump, under attack for his handling of the worst health crisis in more than a century, breezily pledged on his final-week swing to “vanquish the virus.”

The Democratic presidential nominee also argued that a Supreme Court conservative majority stretched to 6-3 by newly confirmed Justice Amy Coney Barrett could dismantle the Obama administration's signature health law and leave millions without insurance coverage during the pandemic. He called Trump's handling of the coronavirus an “insult” to its victims, especially as cases spike dramatically around the country.

“Even if I win, it’s going to take a lot of hard work to end this pandemic,” Biden said during a speech in Wilmington, Delaware. "I do promise this: We will start on day one doing the right things.”

His comments reflected an unwavering attempt to keep the political spotlight on the pandemic. That was a departure from the president, who downplayed the threat and spent his day in Arizona, where relaxed rules on social distancing made staging big rallies easier.

The pandemic's consequences were escalating, with deaths climbing in 39 states and an average of 805 people dying daily nationwide — up from 714 two weeks ago. Overall, about 227,000 Americans have died. The sharp rise sent shockwaves through financial markets, causing the Dow Jones Industrial Average to drop 900-plus points.

Trump, who frequently lauds rising markets, failed to mention the decline. But he promised that economic growth figures for the summer quarter, due Thursday, would be strong, declaring during a rally in Bullhead City, Arizona, “This election is a choice between a Trump super-recovery and a Biden depression.”

As Trump spoke, an Air Force fighter thundered nearby and released a flare to get the attention of a non-responsive private aircraft that was flying in the restricted airspace. North American Aerospace Defense Command said the plane was escorted out by the F-16 “without further incident.” Trump was at first caught off guard but later cheered the fighter, proclaiming, “I love that sound” as it roared overhead.

The president also condemned violence that occurred during some protests in response to the police shooting of Walter Wallace Jr., a Black man, in Philadelphia saying Biden stands “with the rioters and the vandals.”

But Biden said in Wilmington, “There is no excuse whatsoever for the looting and the violence."

Bullhead City is just across the border from Nevada, a state Trump is hoping to flip during Election Day next Tuesday. A Trump Nevada rally last month attracted thousands and led to the airport that hosted it being fined more than $5,500 for violating pandemic crowd restrictions.

Rather than curb his crowd, Trump moved just across the border and used his rally Wednesday to scoff at Democratic leaders in states like Nevada for trying to enforce social distancing rules. The event's crowd looked to be mostly from Arizona, though there were attendees from Nevada. Few wore masks.

The weather was far milder than during a Tuesday night Trump rally in Omaha, Nebraska. After Trump left that one, hundreds of attendees at Eppley Airfield spent hours waiting in the cold for transportation to cars parked far away. Several people were taken to hospitals amid concerns about exposure.

“Because of the sheer size of the crowd, we deployed 40 shuttlebuses – double the normal allotment – but local road closures and resulting congestion caused delays,” Trump spokeswoman Samantha Zager said in a statement.

Trump is trailing Biden in most national polls. Biden also has an advantage, though narrower, in the key swing states that could decide the election.

Biden voted early in Wilmington on Wednesday and received a virtual briefing from health experts. One, Dr. David Kessler, director of the Center for Science in the Public Interest, warned, “We are in the midst of the third wave, and I don’t think anyone can tell you how high this is going to get.”

Trump was nonetheless defiant, declaring, "We will vanquish the virus and emerge stronger than ever before.”

In a campaign sidelight, the president lashed out after news that Miles Taylor, former chief of staff at the Department of Homeland Security, was revealed as the author of a scathing anti-Trump op-ed and book under the pen name “Anonymous.”

Trump views Nevada favorably, despite it not backing a Republican for president since 2004. Hillary Clinton won it by less than 2.5 percentage points in 2016.

And Biden wants to flip Arizona, which hasn't voted Democratic for president since 1996. His running mate, California Sen. Kamala Harris, was in Arizona on Wednesday, meeting with Latina entrepreneurs and African American leaders as well as holding two drive-in rallies.

On Friday, Harris will visit Fort Worth, Houston and the U.S.-Mexico border town of McAllen in Texas -- a state that hasn’t backed a Democrat for president since 1976 or even elected one to statewide office since 1994. Texas was long so reliably red that top national Democrats visited only to hold fundraisers.

“I am really grateful for the attention that they have given Texas because it has been so long since a presidential campaign gave this state a look,” said Beto O’Rourke, a former Texas congressman and onetime presidential hopeful. But he declined to predict that Biden would win the state, saying only “There is a possibility,” contingent on turnout breaking records.

Democrats point to a larger number of their party members returning absentee ballots — results that could be decisive since more people are likely to vote by mail during the pandemic. Trump's campaign argues that enough of its supporters will vote on Election Day to overwhelm any early Biden advantage.

Around 71.5 million people nationwide have so far voted in advance, either by casting early, in-person ballots or voting by mail, according to an Associated Press analysis. That's already far more than the total advance ballots cast before the 2016 presidential election.

AP’s Advance Voting guide brings you the facts about voting early, by mail or absentee from each state: https://interactives.ap.org/advance-voting-2020/.