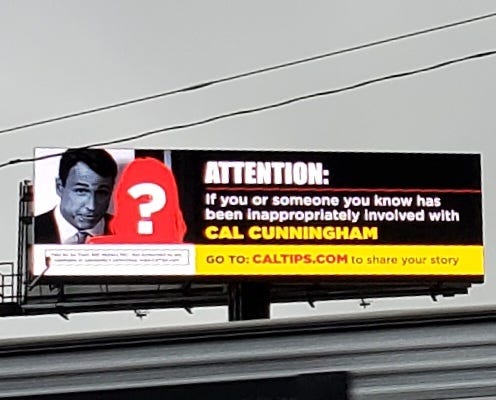 The 2020 Election may be approaching the final days, but one smear campaign appears to still be heating up in North Carolina. A digital billboard across the street from Charlotte Motor Speedway is asking anyone "inappropriately involved" with Democratic U.S. Senate candidate Cal Cunningham to share their story.

Cunningham, who is looking to unseat incumbent Republican Thom Tillis, has recently been the subject of an alleged sexing scandal with a woman who is not his wife. “I’ve taken responsibility for the hurt that I’ve caused in my personal life. I’ve apologized for it,” Cunningham told reporters on Oct. 9. “I’ve said what I’m going to say about it.”

The billboard asks for information to be sent to caltips.com, a website operated by Truth Still Matters PAC. According to opensecrets.org, the group has spent over $104K to help the Tillis' campaign during this election cycle.

Likely voters in North Carolina aren't shaken by the misconduct and the Latest polls haven't swayed much since news of the scandal dropped. Cunningham maintains a slight lead over Tillis with eight days left.