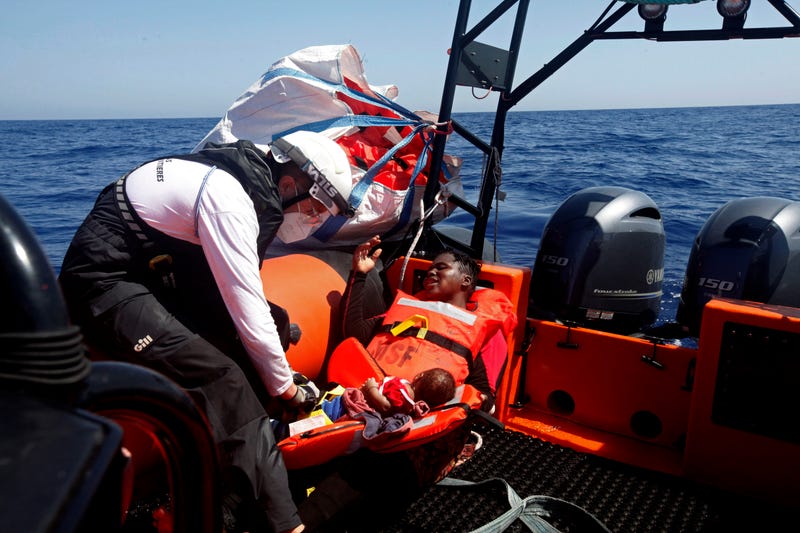 ABOARD THE GEO BARENTS (AP) — Two vessels rescued around 190 Europe-bound migrants, including women and children, off the coast of Libya, charities operating the vessels said Monday. The rescues came amid a spike in attempted crossings of the Mediterranean Sea.

More than 24,000 migrants have been intercepted and returned to Libya by the country’s coast guard so far this year, according to the U.N. migration agency. That's more than double the number from 2020, when about 11,890 migrants were brought back to shore in the conflict-ridden country.

More than a thousand more are believed to have drowned in just the first half of the year, according to the agency's figures.

Migrants waved to rescuers from a flimsy rubber dinghy at midday Monday before they were given life vests and transferred onboard the Geo Barents, a rescue vessel operated by the charity Doctors without Borders. They numbered 54 in total, according to Barbara Deck, the organization's project coordinator.

Among them were two dozen minors, six women and a 6-week-old baby, who was among the first to disembark, crying, after being carefully placed in a large orange life vest. The migrants' original vessel had been packed, with no shade and barely room for all onboard to sit down.

The migrants were not immediately available for comment. They were rushed for medical inspection by workers for the aid agency known by its French name as Medecins Sans Frontieres. Some appeared exhausted and smiled in relief after their rescue, with a few dancing and singing. Among them were migrants from African countries including Ivory Coast, Cameron, Mali, Somalia and Burkina Faso, according to Deck.

It was unclear why this year has seen so many crossings but mid to late summer is typically a peak time for attempts on the Central Mediterranean route because of good weather. Rescues along this route have become routine during the warmer months. Economic hardship, sometimes exacerbated by