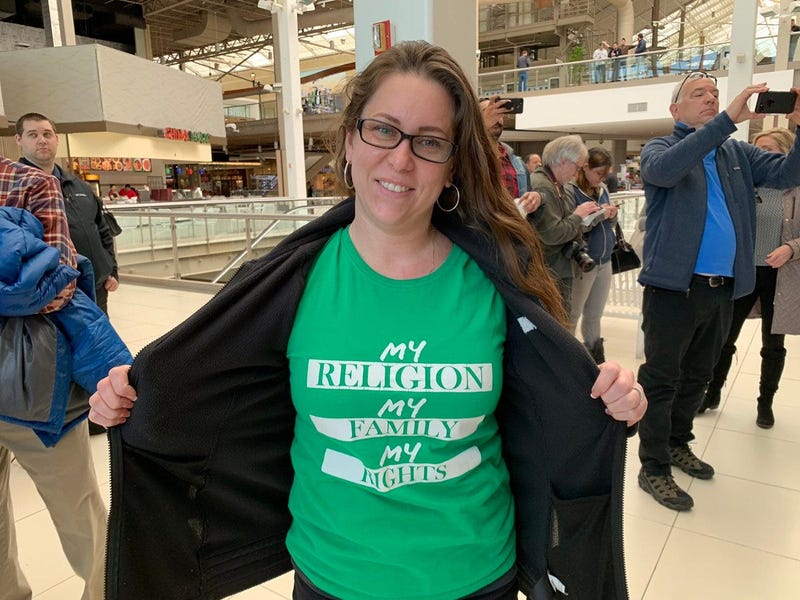 WEST NYACK, N.Y. (WCBS 880) — A handful of people unhappy with Rockland County’s state of emergency, barring all unvaccinated minors from public spaces, took their protest to the Palisades Center Mall on Thursday.

“My son, who is the father of two unvaccinated children, fears he may be jailed,” said Sandy Nemerof.

On Tuesday, Rockland County Executive Ed Day issued a state of emergency over the ongoing measles outbreak in the area. Over 150 cases have been confirmed since October 2018, prompting the county to bar all unvaccinated persons under the age of 18 from public spaces in order to prevent the spread of the disease.

Day said there will not be any law enforcement officials demanding to see vaccination records and they are not looking to prosecute anyone over the matter. But, if an unvaccinated person is found to knowingly be violating the ban, they could face up to six months in jail.

A handful of people unhappy with Rockland County’s measles emergency order have gathered here at the Palisades Mall. Besides opposition to vaccines, they say there are civil rights issues @wcbs880 pic.twitter.com/LtMDkwR4JS

Nemerof said it was this threat that caused her son to cancel a birthday party that had been planned for her grandchild this weekend.

“There is very, very strong element of unfairness in this,” she said.

Rita Palma, of Long Island, agreed that the fears are being blown out of proportion.

“A state of emergency for four active cases,” she notes. “Does that sound reasonable?”

Palma told WCBS 880’s Steve Burns that she traveled to the area in solidarity and has been trying to generate enough support to force the county to end the emergency order.

She says she’s mostly been "talking to people that are hiding in their homes with their healthy children who have bonafide religious objections.”

The Facebook event page for the protest had over 70 responses, however, only around a dozen showed up as mall security continued to keep a close eye on the  group.