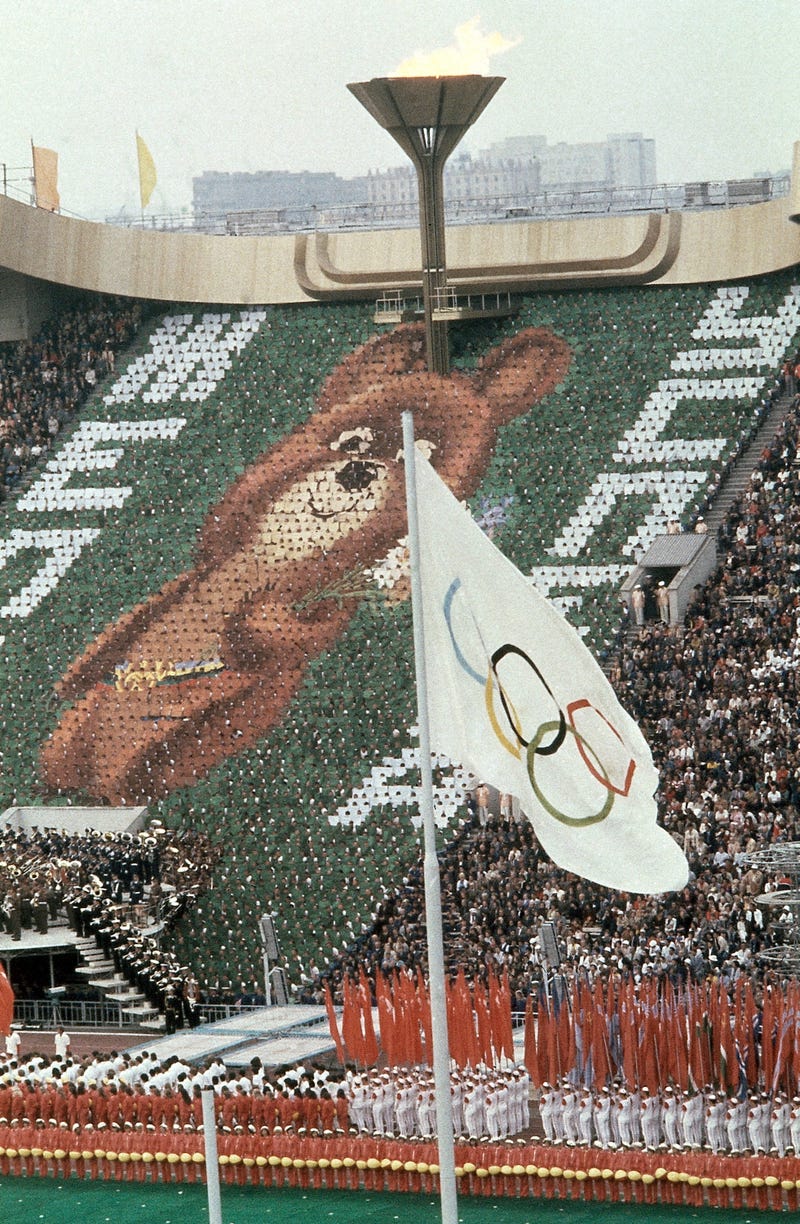 Photo credit FILE - In this July 19, 1980, file photo, members of the crowd hold up 3,500 cards to create an image of Misha the Bear Cup, the mascot of the Moscow Olympic Games at the Lenin Stadium in Russia on. Above burns the Olympic flame. (AP Photo/File)
By The Associated Press

EDITORS — With the Tokyo Olympics postponed for a year because of the coronavirus pandemic, The Associated Press is looking back at the history of Summer Games. Here are some of the highlights of the 1980 Olympics in Moscow.

The Cold War made for decades of tense Olympic battles between the United States and the Soviet Union. In 1980 that rivalry split the Olympics altogether.

As the Soviets won medal after medal in Moscow, U.S. athletes were given token medals at a White House reception. The boycott came just months after the U.S. had hosted the Winter Olympics in Lake Placid, beating the Soviets 4-3 in the “Miracle on Ice” final.

Carter recruited boxing legend Muhammad Ali to criss-cross Africa with an appeal to countries to join the boycott. Of the five nations Ali visited, three competed in Moscow anyway.

The U.S., China, Canada, West Germany and much of South America stayed home. Many European countries fudged the issue, sending teams who took part under the Olympic flag. Four years later, the Soviet Union boycotted the 1984 Olympics in Los Angeles as retaliation.

The Soviet war in Afghanistan rumbled on through the 1980 Olympics. Boxers and wrestlers sent by Afghanistan's pro-Soviet authorities were held up as heroes by the Soviet media, which reported they had defied threats of physical harm to compete. Some Afghan athletes had defected to Pakistan instead.

It was a showcase of ideology as much as sporting achievement. The main venue was Moscow's Central Lenin Stadium, now better known as Luzhniki, which also held the soccer World Cup final in 2018. The Soviets and their allies held up sporting successes as a validation of their political systems.

Barely a decade later, the Soviet Union would be a thing of the past as it fractured into 15 newly independent countries. To this day, many older Russians remember the Olympics with pride as a time when their country proved it could host a prestigious international event, even with Western nations trying to spoil the party.

A generation of Russian children loved Misha, the cuddly bear mascot. His farewell at the closing ceremony, flying away clutching a bunch of balloons, was referenced in the 2014 Winter Olympics in Sochi when a new Russian bear mascot shed a tear and blew out the Olympic flame.

With the U.S. out of the picture, the Cold War medal-table rivalry was gone and Soviet athletes were head and shoulders above the rest.

They finished with 195 total medals, more than any country at any Olympic Games before or since, ahead of East Germany with 126. Britain's 21 medals were the most for any non-Communist country.

Swimmer Vladimir Salnikov churned up the pool with three gold medals and a world record, while gymnast Alexander Dityatin won a medal in eight events, an Olympic record matched only by U.S. swimmer Michael Phelps in 2004 and 2008.

It was hard for ordinary Soviet citizens to watch the Olympics, though. Travel to Moscow from other cities was restricted during the Games and locals were warned to limit social contact with people from non-Communist countries.

East Germany's medal haul was vast for a country of barely 16 million people. After the Berlin Wall fell in 1989, Germany was reunified and the East's vast state-run doping program was revealed.

Heading into 1980, few had Scottish sprinter Allan Wells down as the favorite to win 100-meter gold. He did it anyway.

With the U.S. team staying home it was a battle between Wells and Cuban runner Silvio Leonard. They started on opposite sides of the track for the final; Leonard in lane one, Wells in lane eight.

They were neck-and-neck all the way down the track and were given identical times but Wells dipped marginally quicker to take the win on a photo finish. The Olympic anthem was played, not “God Save The Queen,” as Britain nodded to the boycott by competing without national symbols.

To prove his win wasn't just a fluke of the boycott, Wells raced the leading U.S. sprinters two weeks later at a meet in West Germany and beat them too.

A 2015 documentary by the BBC alleged that Wells had taken the banned steroid stanozolol during his career. He strongly denies doping.

The Moscow boycott put 1976 fencing gold medalist Thomas Bach on a path to becoming president of the International Olympic Committee, and shaped how he reacted to Russian doping decades later.

He urged West German Olympic officials to send a team at a conference in May 1980 but was outvoted. After being mentored in sports politics while working for Adidas, Bach joined the IOC and was elected president in 2013. Rower Anita DeFrantz sued the U.S. Olympic Committee in her campaign against the boycott and is now an IOC vice-president.

When widespread doping in Russia was revealed, Bach and the IOC opted against excluding Russia from the 2016 Olympics. Bach has cited his experience of the boycotts when arguing against banning any country, and to back up IOC rules preventing athletes making gestures of protest.

“We must be politically neutral because otherwise we would exactly end up in this kind of divisive and boycott situations,” he said in January. The boycotts in Moscow and Los Angeles “brought the Olympic Games at the point of demise” and had “no effect whatsoever” on countries' foreign policy, he added.