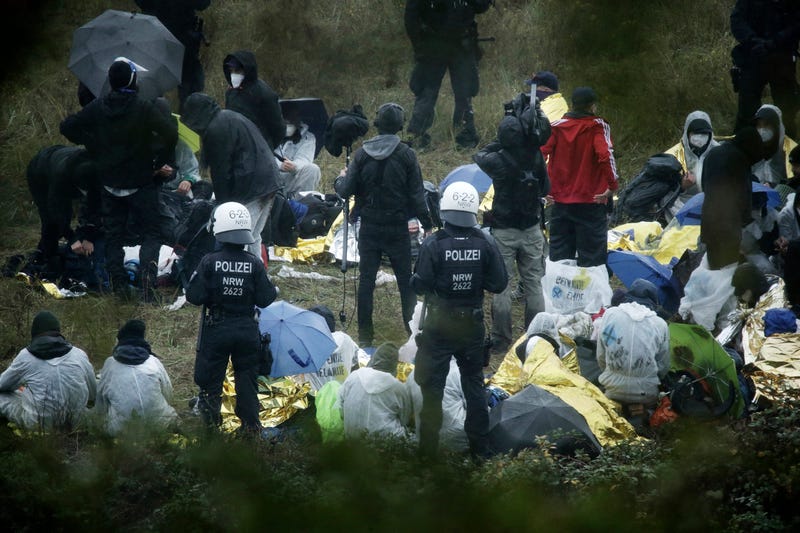 Photo credit Activists are surrounded by police on the Garzweiler power plant grounds in Grevenbroich, western Germany, Saturday, Sept. 26, 2020. Anti-coal protesters have entered a mine to protest the continued extraction and use of fossil fuels. (David Young/dpa via AP)
By The Associated Press

LUETZERATH, Germany (AP) — Hundreds of anti-coal activists staged protesters in and around a mine in western Germany on Saturday, demonstrating against the continued extraction and use of fossil fuels in Europe's biggest economy.

Environmental groups oppose the German government's decision to allow the mining and burning of coal in the country until 2038, a deadline the activists say is too late to effectively tackle climate change.

Activists, dressed in colored overalls and braving wind and rain, were also protesting the planned destruction of several villages to make way for the expansion of the Garzweiler strip mine, west of Cologne.

Aachen police said they couldn't immediately provide a number for how many people attended the protests, which were staged at more than a dozen different sites around the vast, open-cast mine.

The campaign group Ende Gelaende said around 3,000 people took part in various activities, including the symbolic reopening of a shuttered bar in the doomed village of Keyenberg.

The Garzweiler mine and nearby power plants have been a focus of protests for several years. Environmentalists say they are among the biggest sources of harmful pollution and greenhouse gas emissions in Europe.

In her weekly video message, German Chancellor Angela Merkel called Saturday for sustainable development, including to confront the threat of global warming.

Merkel cited Germany's increase in renewable energy production as an example of the measures her country has taken. She did not mention coal mines.