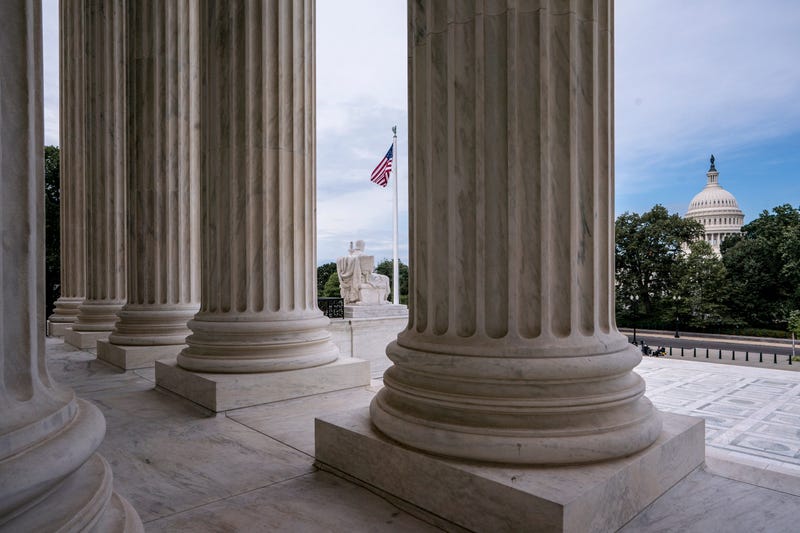 Photo credit FILE - In this June 15, 2020, file photo the columns of the Supreme Court are seen with the Capitol at right, in Washington. The Senate is ready to move quickly on a Supreme Court nominee. President Donald Trump is expected Saturday, Sept. 26, to announce his replacement for the late Justice Ruth Bader Ginsburg. (AP Photo/J. Scott Applewhite, File)
By The Associated Press

Ginsburg, who died Sept. 18 at 87, was the leader of the liberal wing of the court, which had been split 5-4 between conservatives and liberals. Roberts had, on occasion, sided with the liberals. But if Trump fills Ginsburg's seat, there will be six conservative justices, three of them appointed by him.

Here are several big issues that are poised to come before the justices where a more solidly conservative majority could make a difference:

A week after the presidential election, the court will hear arguments in bid by the Trump administration and Republican-led states to overturn the Obama-era health care law. In the midst of the coronavirus pandemic, coverage for more than 20 million people is at stake, along with the law’s ban on insurance discrimination against Americans with pre-existing medical conditions.

A more conservative court might be seen as more sympathetic to striking down the Affordable Care Act, but the court might still choose not to. The justices have less drastic options. For example, the court could invalidate “Obamacare’s” now toothless requirement that most Americans carry health insurance, and leave in place core provisions such as subsidized health insurance, Medicaid expansion and protection for people with medical problems.

Now that former President Barack Obama’s landmark law is more than 10 years old, its many provisions are fully baked into the health care system. Unwinding it would be a colossal undertaking, fraught with political risks.

Trump has said he wants Ginsburg's replacement confirmed to the Supreme Court ahead of Election Day so that a full court can weigh in on any campaign-related litigation.

Speaking at the White House on Wednesday, Trump predicted the election “will end up in the Supreme Court, adding, “I think it’s important we have nine justices.” The 2016 election was conducted with only eight justices on the bench, however, after Republicans refused to hold hearings on President Barack Obama's nominee to replace the late Justice Antonin Scalia.

It's possible that an election-deciding case lands in the justices' laps, as one did in the 2000 election between Republican George W. Bush and Democrat Al Gore. And liberals worry that a court with three Trump appointees would favor him in a dispute with Joe Biden.