Click here to listen to the 880 News Stream while the Mets are one. 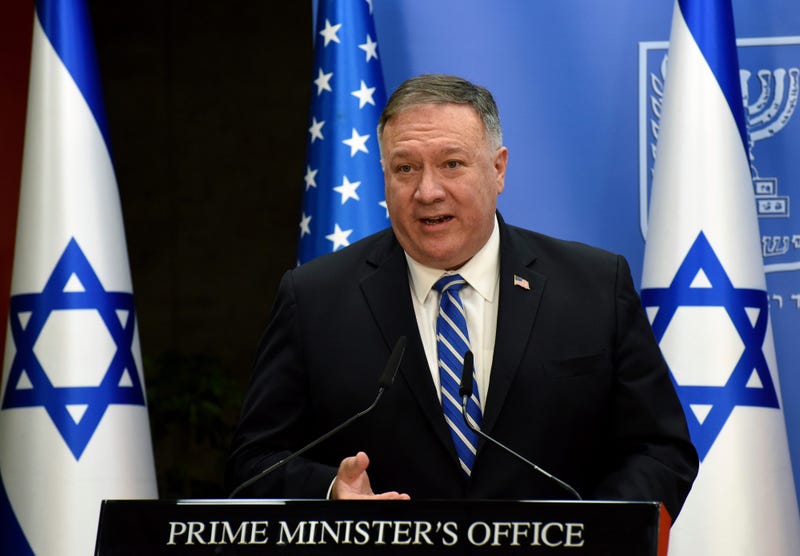 Photo credit U.S. Secretary of State Mike Pompeo speaks during a joint statement to the press with Israeli Prime Minister Benjamin Netanyahu after their meeting, in Jerusalem, Monday, Aug. 24, 2020. (Debbie Hill/Pool via AP)
By The Associated Press

CAIRO (AP) — U.S. Secretary of State Mike Pompeo arrived in Sudan on Tuesday, the most senior U.S. official to visit the African country since last year's ouster of its autocratic leader, Omar al-Bashir.

Pompeo is the first U.S. secretary of state to visit the African country since 2005, when Condoleezza Rice visited. The visit was meant to show U.S. support for the country’s fragile transition to democracy.

Pompeo and Sudanese officials discussed the normalization of ties between Sudan and Israel and the removal of the country from the U.S. list of state sponsors of terrorism, officials from both countries said. Sudan's Prime Minister Abdalla Hamdok, however, urged the Trump to separate the normalization from the de-listing Sudan, a government spokesman said.

Pompeo arrived from Israel and while he was still airborne he tweeted: “Happy to announce that we are on the FIRST official NONSTOP flight from Israel to Sudan!”

His flight was the first direct trip between Tel Aviv to the Sudanese capital Khartoum. Pompeo was in Israel on Monday on the first stop of his multi-country tour in the region. The trip follows the Aug. 13 agreement by Israel and the United Arab Emirates to establish diplomatic ties.

Pompeo emerged from the plane after landing at Khartoum International Airport wearing a face mask as a protective measure against the coronavirus. His motorcade then left the airport, heading to meetings with Sudanese Gen. Abdel-Fattah Burhan, the head of the ruling sovereign council, and Hamdok.

Hamdok later described his meeting with Pompeo as “great" and tweeted in English that they had a “direct & transparent conversation" about removing Sudan from the U.S. terror list, bilateral relations and the U.S. government's support for the civilian-led transitional government in Sudan.

“I continue to look forward to positive, tangible steps in supporting the glorious Sudanese revolution,” he tweeted.

The prime minister urged the Trump administration not to link the removal of Sudan’s name from its list of state sponsors of terrorism to the normalization of times with Israel, said Information Minister Fasial Saleh.

"The transitional government does not have the mandate ... to decide on normalization with Israel. This matter will be decided after the completion of the transitional authority,” said Saleh. He was referring to the legislative body which has yet to be formed.

The sovereign council said Pompeo also met with Burhan but did not give details. A Sudanese military official said their talks focused on “the next step toward normalization and incentives that Sudan will gain." He spoke on condition of anonymity because of he was not authorized to brief reporters.

"Great to be in Khartoum for meetings with the civilian-led transitional government. The democratic transition underway is a once in a generation opportunity for the people of Sudan. Looking forward to discussing how to deepen the U.S.-Sudan relationship," Pompeo tweeted.

The State Department had said ahead of the tour that Pompeo would discuss “continued U.S. support for the civilian-led transitional government and express support for deepening the Sudan-Israel relationship.”

In February, Israeli Prime Minister Benjamin Netanyahu met with Burhan, during a trip to Uganda where they pledged to pursue normalization. The meeting was held secretly and only announced after it happened. It also paved the way for another first — two weeks after the meeting in Uganda, an Israeli aircraft made a historic first flight over Sudanese territory.

At the time of the Burhan-Netanyahu meeting, the Sudanese military said the talks with Israel were an effort to help end Sudan’s status as an international pariah state.

Following a meeting with Hamdok on Monday, a coalition representing the protesters who helped topple al-Bashir last year, said in a statement that the transitional government “has no mandate” to decide on normalizing ties with Israel.

The coalition, known as Forces for the Declaration of Freedom and Change, also “emphasized the right of the Palestinian people to their land and the right of free and dignified life,” the statement said.

Sudan hosted the landmark Arab conference after the 1967 Mideast War where eight Arab countries approved the “three no’s”: no peace with Israel, no recognition of Israel and no negotiations.

But in recent years those hostilities have softened, and both countries have expressed readiness to normalize relations.

A Sudanese government official told The Associated Press last week that deliberations between Sudanese and Israeli officials have been going on for months, with the help of Egypt, the UAE and the U.S.

Sudan is now on a fragile path to democracy after the popular uprising led the military to overthrow al-Bashir in April 2019. A military-civilian government now rules the country, with elections deemed possible in late 2022.

The transitional authorities are desperate to lift sanctions linked to its listing by the U.S. as a state sponsor of terror. That would be a key step toward ending its isolation and rebuilding its battered economy that has plunged in recent months, threatening to destabilize the political transition.

The designation dates back to the 1990s, when Sudan briefly hosted Osama bin Laden and other wanted militants. Sudan was also believed to have served as a pipeline for Iran to supply weapons to Palestinian militants in the Gaza Strip. Israel was thought to have been behind airstrikes in Sudan that destroyed a convoy in 2009 and a weapons factory in 2012.