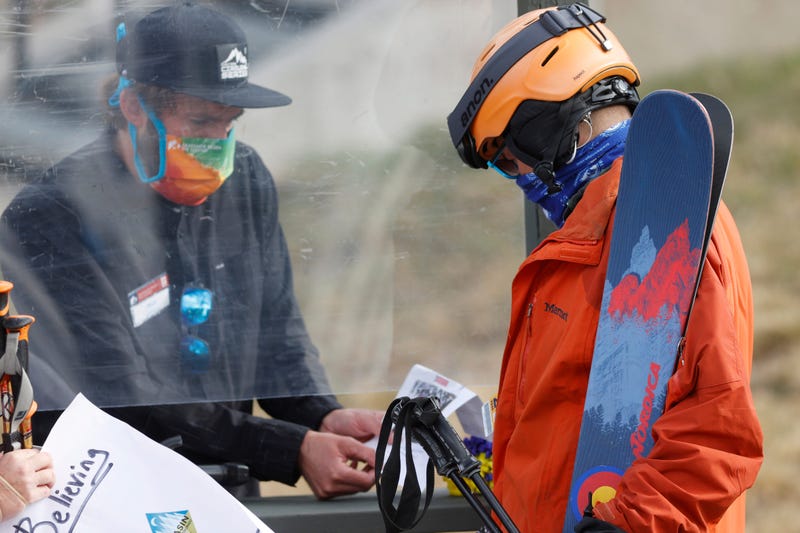 Photo credit An employee is protected by a plexiglass shield while processing a skier at the reopening of Arapahoe Basin Ski Resort, which closed in mid-March to help in the effort to stop the spread of the new coronavirus, in a Wednesday, May 27, 2020 file photo, in Keystone, Colo. An executive order signed y President Donald Trump that temporarily bans a wide variety of foreign visas has thrown another obstacle in the path of ski resorts as they try to hire enough temporary workers to fill crucial jobs in the era of COVID-19. (AP Photo/David Zalubowski, File)
By The Associated Press

DENVER (AP) — Milagros Sotelo was looking forward to traveling from South America to Tennessee to start a job at Ober Gatlinburg ski resort this winter. The 22-year-old student worked the last two ski seasons in the equipment rental shop at the small resort nestled in the Smoky Mountains and was excited to reconnect with friends, practice her English and take a break from law school in Lima, Peru, where she lives.

But on June 22, President Trump signed an executive order temporarily barring a wide variety of foreign worker visas, including J-1 visas often issued to South American students who come to North America during their summer break. Sotelo’s plans were put on hold, and now she’s scrambling to find a job closer to home.

As ski resorts try to figure out how to operate safely during the coronavirus pandemic, by requiring facemasks, enforcing social distancing in lift lines and eliminating dine-in service, Trump's order has added another obstacle heading into the winter: hiring enough temporary workers to fill crucial jobs like operating chair lifts, serving food and cleaning hotel rooms.

Trump argued foreigners pose a risk to American workers as the country tries to jumpstart its economy.

“American workers compete against foreign nationals for jobs in every sector of our economy, including against millions of aliens who enter the United States to perform temporary work,” according to the order, which is set to expire at the end of the year.

But Sotelo said there are plenty of jobs to go around, especially at and near ski resorts.

Many industry leaders agree, saying that even with Trump’s order in place, it’s difficult to fill seasonal jobs with domestic workers.

“A big part of the reason is — and this is true even during COVID — most Americans want a year-round job. They don’t want a revolving-door-type job,” said Dave Byrd, director of risk and regulatory affairs at the National Ski Areas Association.

Many seasonal jobs don’t offer benefits such as health insurance or retirement plans, Byrd said, and it’s even harder to recruit domestic workers because ski resorts are often in rural areas with expensive housing.

“Certainly in Western destination resorts, it is an enormous challenge for us to find workers because of the cost of housing in fancy destination ski venues — Vail, Crested Butte, Telluride, Taos, Jackson Hole, Big Sky, Sun Valley, Lake Tahoe,” he said.

Vail Resorts, which owns 33 ski areas in the U.S. and has historically relied on foreign workers, is recruiting more aggressively in local communities for the upcoming season and is seeing some interest among college students who have more flexibility because they are learning remotely or are taking a gap year because of the pandemic.

“We have already ramped up winter season recruiting efforts and have been pleased with the results so far,” said Vail Resorts spokesman Ryan Huff, who declined to say how many foreign workers the Colorado-based company hires for a typical winter season. Huff noted that Vail Resorts could pursue a “limited number” of foreign workers if and when the restrictions are lifted to help staff the remainder of the season.

But smaller resorts that aren't as well known are sweating opening day.

At Ober Gatlinburg, September and October are spent recruiting student workers like Sotelo from places like Brazil, Peru and the Dominican Republic. This year, it could be difficult to fill the 150 jobs that typically go to foreign workers.

According to the NSAA, an average of 85 jobs went unfilled last winter season at resorts in the region that includes Tennessee, Pennsylvania, West Virginia, Virginia and North Carolina — in large part because of their remote locations.

“We’ve experienced this for many, many years, but it’s become very critical now,” said Jerry Huskey, a risk manager at Ober Gatlinburg who has worked in the resort’s human resources department for more than two decades.

He said that if the order remains in place, the resort, which typically employs about 500 workers, might have to cut operating hours and close some of its restaurants this season. In the meantime, the resort is touting increased hourly wages to entice workers and has had some success recruiting out-of-work convention staff from Florida.

Huskey started recruiting foreign workers on J-1 visas in the mid-1990s after an improving economy made it harder to attract Americans. About a dozen foreigners worked at the resort initially, and the numbers grew season over season as the area grew and competition for help intensified.

“It’s a good exchange of information and cultures. ... They want to see what goes on in the U.S. They’ve never been here before, so they’re really losing out on that aspect and we’re losing out on having them,” Huskey said of the current situation.

The NSAA and ski resorts across the country were keeping a close eye on two federal lawsuits challenging Trump’s order — one in Washington D.C. and the other in the Northern District of California. The D.C. judge kept in place Trump's ban on J-1 and H-2B visas, so now the ski industry is pinning its hopes on the California judge throwing out the directive.

“That would be the first hurdle, of course. Beyond that, the countries would have to open up to travel and then they would also have to be willing to come here with this virus going on,” Huskey said. “It’s a little sketchy and so many hurdles to get across right now.”