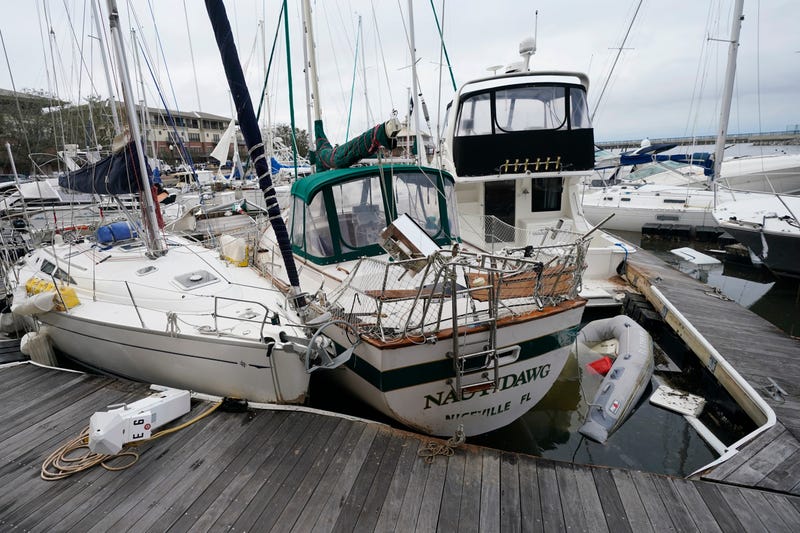 Photo credit Storm damaged boats sit at the dock in a marina, Thursday, Sept. 17, 2020, in Pensacola, Fla. Rivers swollen by Hurricane Sally's rains threatened more misery for parts of the Florida Panhandle and south Alabama on Thursday, as the storm's remnants continued to dump heavy rains inland that spread the threat of flooding to Georgia and the Carolinas.(AP Photo/Gerald Herbert)
By The Associated Press

Here are the latest developments on tropical weather:

BAY MINETTE, Ala. – An official for an Alabama county just east of Mobile Bay says the county has sustained “tremendous damage” from Hurricane Sally.

Jenni Guerry is deputy director of emergency management for Baldwin County. At a Thursday news briefing, she said search crews have been trying to make sure people are accounted for and taking them to safety when needed.

Trees and power lines are down throughout the county, one of Alabama’s largest with about 225,000 people. In a social media post, the county said there are also many traffic lights still out and that has led to “collisions and a lot of near misses.”

Homeowners and businesses along the soggy Gulf Coast have begun cleaning up in the storm's wake, even as the region braces for a delayed, second round of flooding in the coming days from rivers and creeks swollen by the storm’s heavy rains.

MONTGOMERY, Ala. — Though Hurricane Sally has passed, officials in Alabama and Florida are warning that the disaster isn't over yet.

Alabama Emergency Management Agency Director Brian Hastings said Thursday morning that inland flooding remains a concern. He says flooding continues to be a problem in the state's southern counties and they expect many rivers to be in moderate or major flood state at noon and continuing through the weekend.

In Florida, Escambia County Emergency Management Manager Eric Gilmore warned “we are not out of the woods yet,” noting the dangers from cresting rivers.

Sally sloshed ashore Wednesday morning on the Gulf Coast as a Category 2 hurricane. It has since weakened to a tropical depression.

WARNER ROBINS, Ga. -- County sheriffs in Georgia are reporting numerous trees down and closures of flooded highways and streets as Sally moves across the South, dumping rain.

In central Georgia, Robins Air Force Base closed one of its entrances Thursday morning due to flooding. In a Facebook post, the base said it would delay the start of the workday for some employees.

Authorities have warned that rain from the storm could swell eight waterways in Florida and Alabama to record levels.

Sally sloshed ashore Wednesday morning on the Gulf Coast as a Category 2 hurricane. It has since weakened to a tropical depression.

PENSACOLA, Fla. — Pensacola International Airport remains closed and officials say they need to assess the safety of the runway and its facility before it reopens after Hurricane Sally sloshed ashore on the Gulf Coast.

In a statement Wednesday evening, the airport gave no timeline on when it would reopen. The airport closed Monday as Sally bore down.

Authorities have warned that rain from the storm could swell eight waterways in Florida and Alabama to record levels. Florida Gov. Ron DeSantis warned residents and visitors of possible river flooding in the coming days.

MIAMI — Sally continues to weaken as it moves over the South after hitting the Gulf Coast as a Category 2 hurricane but is still a dangerous rainmaker as it moves into Georgia on a path to the Carolinas.

As of 5 a.m. EDT, Sally was centered about 50 miles (80 kilometers) southeast of Montgomery, Alabama, and is moving northeast near 12