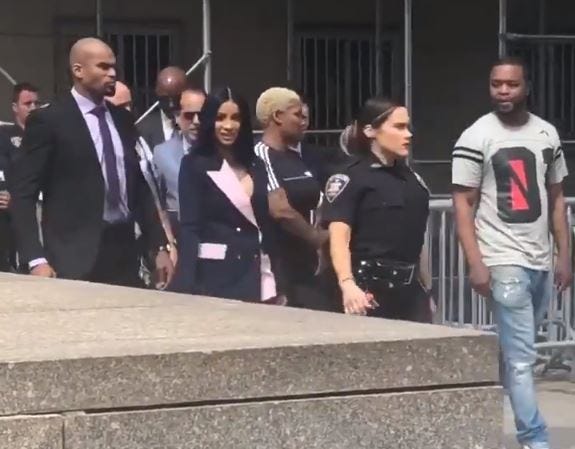 NEW YORK (WCBS 880) — Rapper Cardi B pleaded not guilty to upgraded felony charges at a Queens criminal court Tuesday after being indicted by a grand jury last week.

The 12-count indictment charges the 26-year-old, whose real name is Belcalis Almanzar, and two others with attempted assault, harassment, conspiracy and other crimes for two alleged attacks on female bartenders at a strip club in Queens last August.

“The victims allegedly had glass bottles hurled at them, alcoholic drinks thrown in their faces and one woman’s head was slammed into the bar,” said Acting District Attorney John Ryan. “This kind of violence won’t be tolerated in our community. The defendants will be held accountable for their alleged actions.”

Cardi B pleads not guilty.
The Bronx born rapper is indicted on multiple felony charges including attempted assault in connection to an allegation that she coordinated a fight at a Queens strip club. @wcbs880 pic.twitter.com/zJWVZI7PSY

Prosecutors say during the fight, Cardi B ordered members of her entourage to attack the bartenders as she suspected one was having an affair with husband Offset.

Surveillance video reportedly shows Cardi B picking up an ice bucket and throwing it at the employees on Aug. 29, 2018.

The “Press” rapper was originally facing misdemeanor charges but prosecutors presented the case to a grand jury after she rejected a plea deal.

Cardi B’s lawyer maintains that she didn’t harm anybody during the incident.

A second court date has yet to be scheduled. If convicted, all three can face up to four years in prison.