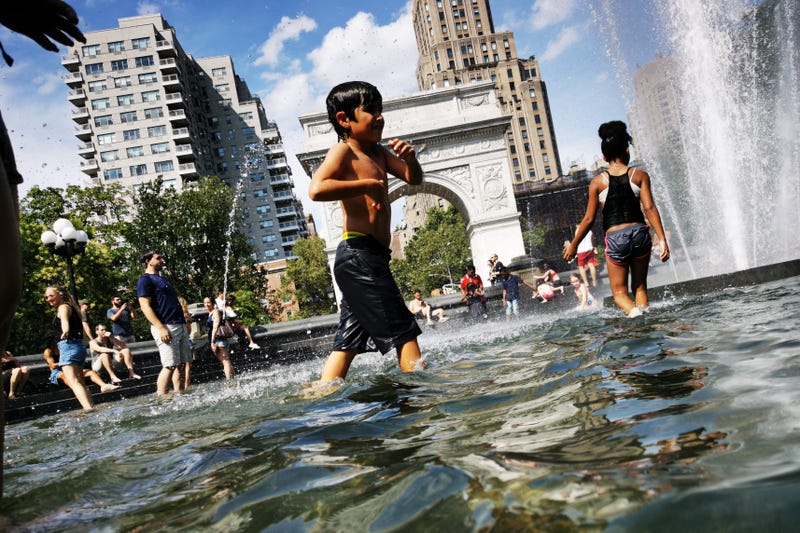 The heat index was approaching 110 degrees in Manhattan Sunday afternoon as temperatures soared back into the 90s.

BEAT THE HEAT: Summer Survival Guide | Things To Do This Weekend

The National Weather Service says the "oppressive and dangerous" heat wave will abate by Monday and Tuesday. It will be stormy and partly cloudy on Monday; although temperatures will drop to the low 80s, it will still be quite humid.

The Excessive Heat Warning remains in effect until this evening, when heat indices will finally fall below 105°F. A flash flood watch has been issued for Monday afternoon through early Tuesday morning. For the latest briefing, see https://t.co/JBWs9C0lzd pic.twitter.com/v4zu7ODckf

JFK Airport and Atlantic City both set daily record highs at 99 degrees Saturday, but most records being set are for the warm overnight temperatures. New York City and Boston are just two of many cities that set or tied record-high minimum temperatures, with temperatures failing to drop below 80 degrees.

We are working 24/7 to keep your service reliable. You can save energy and keep your home comfortable by keeping shades, blinds, or curtains closed. About 40 percent of unwanted #heat comes through windows. #saveenergy #safetyfirst #NY https://t.co/7dyZDEryqA pic.twitter.com/xpyzFZqZaq

The heat led to power outages across the Tri-State on Saturday and Sunday. More than 9,000 PSEG Long Island customers were in the dark Saturday, as were more than 2,000 Con Edison customers in New York City, mostly in Queens. In New Jersey, more than 1,000 JCP&L customers were affected by outages.

The number of outages grew on Sunday, with at least 12,000 customers in the five boroughs without power—including at least 4,700 in Brooklyn and 3,900 in Queens. In parts of Queens, restoration wasn't expected until 11 a.m. Monday.

Earlier in the weekend, de Blasio directed owners of office buildings over 100 feet tall to set thermostats to 78 degrees Fahrenheit through Sunday to conserve energy and avoid a blackout, just a week after a major outage in Manhattan.

We’re almost near the end of the heat emergency. Temperatures will start to go back down tonight. But today’s heat index could still be as high as 110 degrees. Please continue to take precautions. Keep hydrated and keep cool. Head to https://t.co/B0DWoVpTzh for more information. pic.twitter.com/Cnxrwdye5B

The region is under a stagnant heat dome, a phenomenon where the atmosphere is pushing down, trapping humidity and not allowing moisture to escape into the air and become cooling thunderstorms.

Over 500 cooling centers were open through Sunday, the city's public pool and beach hours has been extended and portable drink fountains have been set up in busy pedestrian areas across the city. New Yorkers can find nearby cooling stations and hours of operation by going to nyc.gov/oem.

New York state parks were also keeping their pools open longer. Westchester pools and beaches were also among the locations with extended hours.

The heat wave canceled events across the affected region, including in New York City, where authorities scrubbed a Times Square commemoration of the 1969 moon landing and an outdoor festival featuring soccer star Megan Rapinoe and musician John Legend.

To stay safe in the heat, the mayor’s office is advising the following: