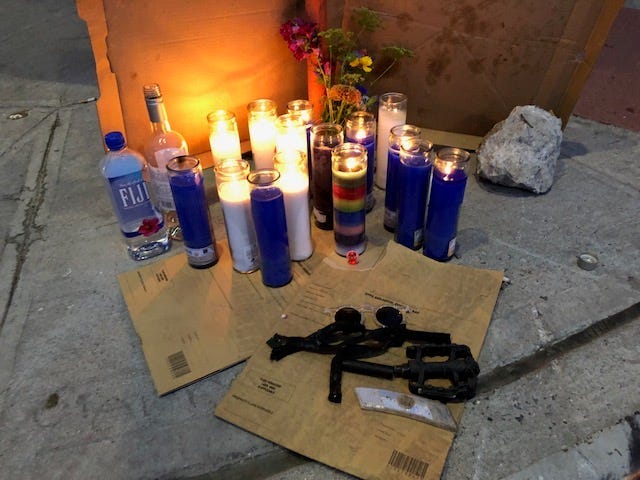 NEW YORK (WCBS 880) — Mayor Bill de Blasio on Tuesday ordered the NYPD to crack down on dangerous drivers following the death of yet another bicyclist in New York City.

Devra Freelander, a 28-year-old artist, was the 15th person on a bike to be killed in the five boroughs this year. The number of deaths in 2019 has already surpassed the number for all of 2018.

Freelander was killed around noon Monday when a cement truck struck her bike at Boerum Street and Bushwick Avenue in Williamsburg.

Humam Yafi, a witness to the accident, tells WCBS 880’s Sean Adams that the driver of the truck did remain at the scene of the accident and says he doesn’t think the driver could have done much to prevent the accident.

“The girl she was coming from the sidewalk, riding her bike and the truck driver, the truck was, you know, has a green light,” Yafi said.

Police are investigating and so far no charges have been filed. According to Adams, there are no bike lanes at the intersection.

Following the accident Tuesday, NYPD Commissioner James O’Neill said the city will be redoubling its efforts to fight reckless driving, but notes both cyclists and drivers have to be mindful.

“Bicyclists have to be responsible, but, as I said, you know – there's a huge difference between a two or three ton vehicle and a 20 or 30 pound bicycle,” O’Neill said.

Police will also no longer be looking to hand out summonses to bike riders and will instead be focusing their efforts on drivers.

“What we're doing is asking the traffic safety team of every one of our commands to focus in on hazardous type violations,” said Chief of Department Terence Monahan. “Speeding, red lights, failing to yield to pedestrians and or bicycles, cellphones, texting. Any sort of distracted driving.”

He says summonses will be given out to anyone stopping in a bike lane.

However, after being told it's often police cars doing that, O'Neill said officers should find another place to park if it's not an emergency.