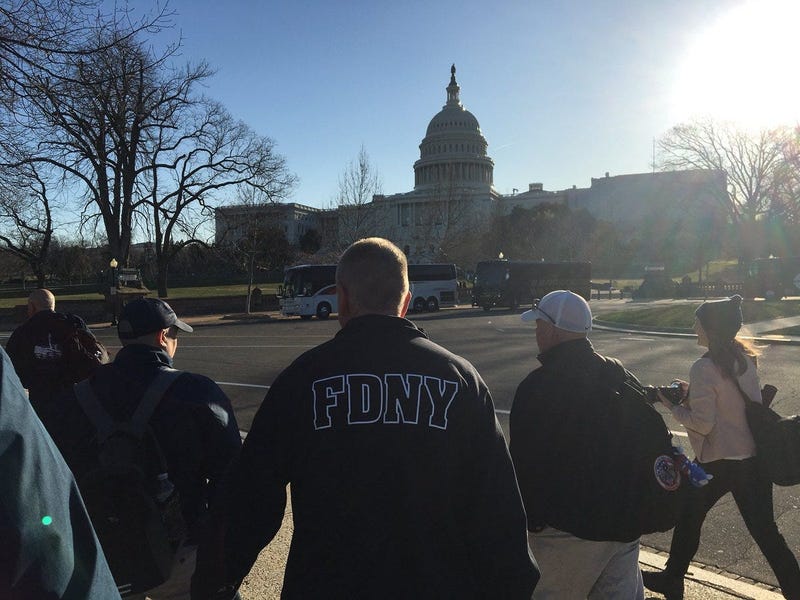 NEW YORK (WCBS 880) — A group of 20 9/11 first responders lobbied in Congress Wednesday to drum up support for more funds as the 9/11 Victims Compensation Fund runs dry.

The group spent Tuesday night preparing and then walked the halls of Congress for hours Wednesday morning trying to sell the bill.

Retired city cop Matthew McCauley consulted with a fellow responder for a meeting with a Senate staffer.

"I think the meetings were positive," he said. "I think we're going to get this done eventually."

John Feal is leading the efforts.

"We need to get more senators on board on that and start catching up to the House," he said.

VIDEO. Sickened 9/11 responders, including Rob Serra in the wheelchair, head to Capitol Hill to lobby lawmakers to renew the #VCF. The fund provides money to those suffering from #WTC illnesses. @wcbs880 pic.twitter.com/MCa6TPSktU

"I remember Congress and the Senate has something political or patriotic or their rhetoric. 'Never forget.' 'We honor those we continue to lose.' And we just throw that in their face when we go into the meetings," he added.

John Feal will lead a group of 20 9/11 responders as they try to convince Congress to approve money for those who are sick. They find quotes from Reps and Senators about #NeverForget and the like, then remind them of their commitment. @wcbs880 pic.twitter.com/r2oN5ijNmg

Michael O'Connell is a 43-year-old retired fire lieutenant who has an autoimmune disease.

“I’m down here fighting knowing that there’s many people in my situation who have young children at home. Men who have died who have a stay-at-home mom who’s trying to provide for these children,” O'Connell said.

Another responder, Rob Serra, had his first day with the FDNY on 9/11.

He now has multiple illnesses and is forced to walk with a cane. He has three kids, 9 and under, and he's limited in what we can do with them.

Tireless work by sickened 9/11 responders who spent the day hiking from one end of Capitol Hill to the other. When realizing how far they had to walk, one joked, “can we get an Uber?” They’re trying to win support to replenish the #VCF. #NeverForget @wcbs880 pic.twitter.com/jNv9MkyqK8

Serra says he's in Washington to stand up for those who can't.

Nearly $5 billion in benefits have been awarded out of the $7.3 billion fund. Supporters are seeking another $5 billion. Without the money, awards will be slashed dramatically.

9/11 responders had a captive audience with GA Sen Johnny Isakson. They jumped in an elevator with him to talk #WTC health. He was more interested in speaking about his love for #NYC steakhouses. #NeverForget @wcbs880 pic.twitter.com/RZ64dsPDCp