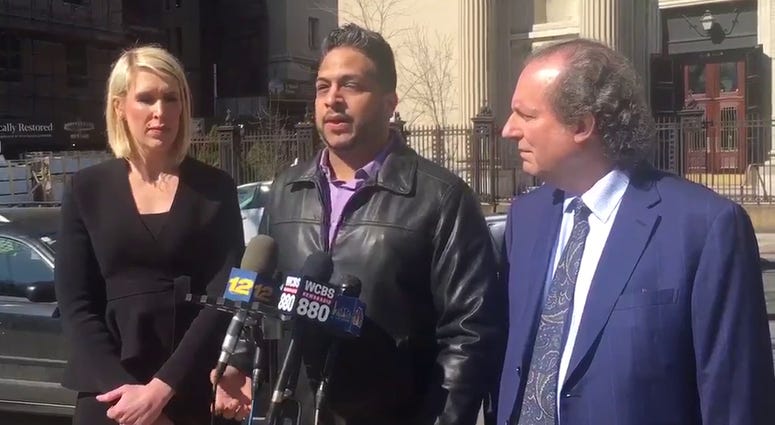 NEW YORK (WCBS 880) -- An alleged victim of sexual abuse at the hands of a trusted priest is telling his story.

Mendoza, 37, is one of five former Catholic school students who have accused Paddack of child sexual abuse.

The alleged abuse occurred when Mendoza was a freshman in 1996.

"He would take me to his office and he would tell me to remove my shirt, unbuckle my pants. I can remember the coldness of the knob of the stethoscope while he's checking my heartbeat and all around my chest and slowly going down to my genitals," Mendoza said. "Just seeing his face turn bloodshot red while doing this, I go back now and think he was getting something out of this."

Paddack also worked at St. Joseph By the Sea on Staten Island and the Church of the Incarnation in Manhattan.

A 2012 accusation against him was found to be unsubstantiated. In an interview with the Daily News, the monsignor proclaimed his innocence.

Five men accuse Monsignor John Paddack (r. of Timothy Cardinal Dolan in 2016) of sexual abuse while he was a guidance counselor at 3 Catholic high schools in the New York archdiocese. He currently leads the Church of Notre Dame on the UWS. @wcbs880 pic.twitter.com/kVTQvs7yon

Mendoza wants Paddack, who is Monsignor at the Church of Notre Dame on the Upper West Side, removed from the archdiocese, Diamond reported.

"The Archdiocese of New York takes seriously all allegations of the sexual abuse of a minor. Our policy and procedures for responding to allegations of abuse include treating anyone alleging abuse with compassion and respect, reporting allegations to and working cooperatively with the district attorney, having the allegation investigated by outside professionals, and turning the entire matter over to our lay review board so that they might carefully examine all the information gathered to determine whether or not the allegation has been substantiated.
If Mr. Mendoza and his attorneys have not already done so, we urge them in the strongest possible terms to report this allegation to the District Attorney's office without delay, so that the DA might determine if there is a possible crime. We also invite Mr. Mendoza and his attorneys to share their allegation with us directly, which has not yet happened, so that we can determine next steps. The archdiocese cannot take action, including the possible removal of a pastor, based merely on newspaper stories or press conferences."