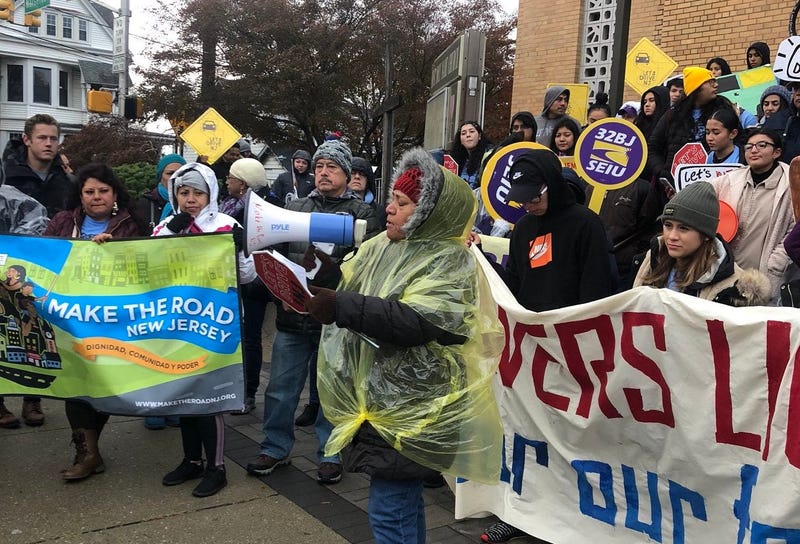 The marchers are pushing for New Jersey to join 14 other states in making it legal for undocumented immigrants to obtain driver's licenses.

“When you look around you, you’re not really thinking about where the person next to you is from, about their background,” said Erika Nava, a policy analyst for New Jersey Policy Perspective. “You just want them to be carrying a license.”

Rain won’t stop us. We are fighting for our families. pic.twitter.com/MSewwFLk5m

Nava says that with more insured and licensed drivers on New Jersey roads, the state would be a safer place to drive.

“We know that everyone in New Jersey will be safer—immigrants and citizens alike—when more drivers are tested, licensed and insured,” said Sara Cullinane, the director of Make the Road New Jersey, which organized Sunday’s march.

Cullinane says she thinks legislation on the issue will be passed by the end of the year.

“It’s about life or death. It’s about being able to see your family or being separated from your family,” Cullinane said.

BREAKING: HUNDREDS of immigrant families marching from Passaic to Bergen in the rain. We want the state legislature to pass #DriversLicenseNOW pic.twitter.com/rLxYlqOmbj

“This policy would pay for itself and would also generate revenue for the state,” Nava said.

Three Republican lawmakers who disagree with the measure say licenses shouldn’t be given out to those who can’t lawfully prove that they’re living in the United States. They haven’t responded to WCBS 880’s request for comment.