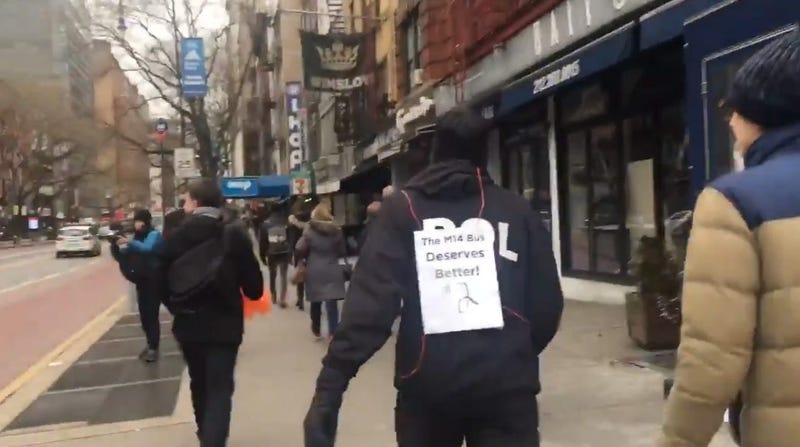 NEW YORK (WCBS 880) — Advocates for better bus service tried to make a point of how slow buses are traveling by attempting to walk faster than an MTA bus across 14th street in the East Village.

The bus won the race, but just barely, by five seconds, leading Thomas DeVito of Transportation Alternatives to declare “we have still confirmed that the M14 is moving at walking speeds.”

Advocates say they need bus lanes, which people don’t park in, in order to move traffic.

Taking the #M14 challenge with @TransAlt to see if we can outwalk the @MTA bus. The bus beat us by 5 seconds. #Ltrainslowdown #Lpocalypse @wcbs880 pic.twitter.com/8S3keoupJP

DeVito is urging the city to keep the L train mitigation plan in place.

Red areas mark what was to become dedicated bus lanes and sidewalk stanchions have been installed waiting for fare boxes, but it is unclear whether the city will go through with its original plans now that the L train shutdown has turned into an L train slowdown.

DeVito warns, "You're going to have tens of thousands of people looking for ways to get around, many of those folks are going to be taking to for hire vehicles."

Mayor Bill de Blasio has said it will take weeks to figure out what parts of the plan are still in the public's interest.