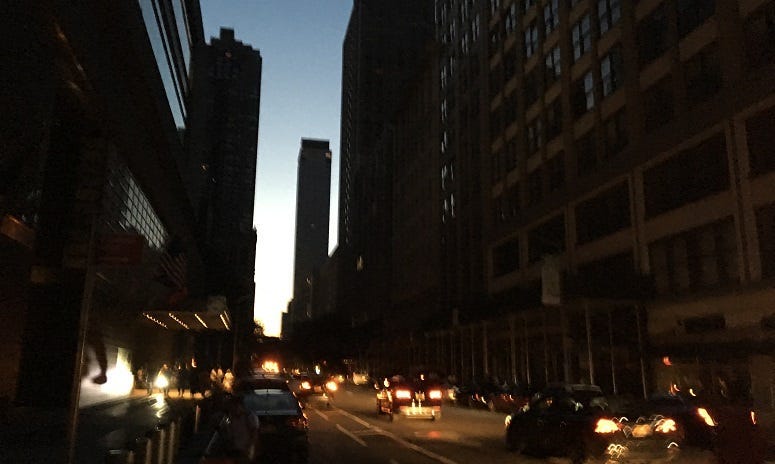 LISTEN FOR LIVE COVERAGE | GET BREAKING NEWS EMAILSPower went out around 6:47 p.m. Saturday, plunging approximately 73,000 customers into darkness between 42nd Street and 72nd Street from the Hudson River to as far as 5th Avenue.

The blackout is between W 42nd St and 72nd St, from the Hudson River to as far as 5th Ave. NYPD has confirmed that there’s no foul play. This was a mechanical issue. NYPD & FDNY are currently responding to people with the most urgent needs, especially those stuck in elevators.

The FDNY responded to an apparent transformer fire at 64th Street and West End Avenue that may have affected a nearby Con Edison substation. WCBS 880's Mike Sugerman reported that area was roped off and the smell of smoke was still in the air.

Meanwhile, Con Edison blamed the outage on an "equipment failure." The NYPD has confirmed that there’s no foul play.

Crews are working hard and we have restored power to many. We are hoping to have everyone back by midnight. pic.twitter.com/KVF7x4hg6u

The utility's CEO John McAvoy said the outage interrupted six networks and they started the restoration process just before 10 p.m.

"We expedited the recovery, performed an initial assessment of what was the most likely cause, isolated that equipment, inspected the other equipment to identify any obvious abnormalities and now we have started the resotation process," he said.

By 11:45 p.m. officials said power had returned to all affected customers. 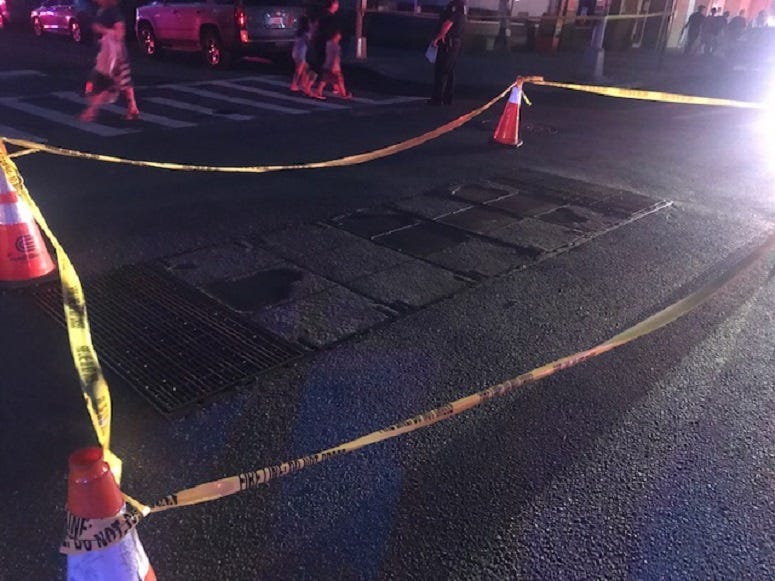 McAvory said they will look at the root causes of the blackout and "will then restore the system to a fully normal condition once we understand exactly what occurred and what caused the outages."

Check the utility's outage map for the latest.

The utility is advising customers in the affected areas to switch off or unplug electrical appliances to avoid potential damage to the appliances when power is restored.

Mayor Bill de Blasio, who was campaigning in Iowa at the time of the outage and is now returning to the city, tweeted that the disruption is significant.

.@NYCEmergencyMgt is working with the NYPD, FDNY and city agencies to respond to power outages in Manhattan due to a manhole fire earlier this evening. Disruption is significant.

During the outage, the towering electronic billboards in Times Square shut down, Columbus Circle was in total darkness, 30 Rockefeller Plaza was running on generators and Broadway shows were canceled. Several cast members of the Tony Award-winning musical "Hadestown" put on an impromptu performance in the street outside the theater for disappointed audience members. 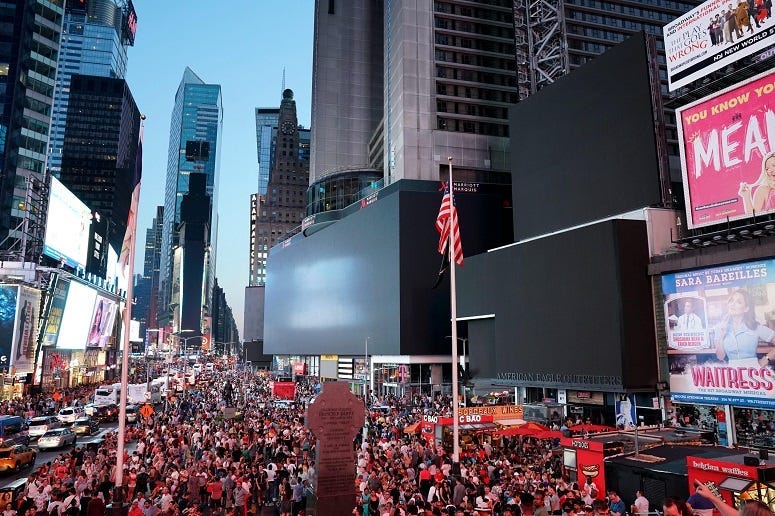 The Jennifer Lopez concert at Madison Square Garden was also evacuated and the show was postponed.

St. Luke's-Roosevelt Hospital lost power and was operating on a back-up emergency generator, but the facility did not have air conditioning.

WCBS 880's Joe Avellar spoke to Mr. and Mrs. Fisher from Dallas, Texas who traveled to New York City to watch their children perform with a choir at Carnegie Hall.

"Fortunately our children were able to perform yesterday," Mr. Fisher said. "Unfortunately the choir today wasn't able to but the really cool thing is they sang some of the songs in the street."

Ron Williams of the Bronx, who was headed to a show at Lincoln Center, said New York City looked like a ghost town as restaurants stood dark and empty.

"It's kind of scary, mysterious because you think of a warm weekend night and the restaurants, and the clubs, it's usually people out on the street, lit up, and it's scary because I've never seen it," he said.

There were reports of the outage extending into Queens and users on social media claimed LaGuardia Airport also lost power.

Subways all across the borough of Manhattan were impacted. Some trains got stuck in tunnels. Penn Station lost power momentarily but was restored quickly.

The 59th Street-Columbus Circle, 47-50 Streets-Rockefeller Center, 34th Street-Hudson Yards, and 5th Avenue/53rd Street stations were left without power and were closed to the public.

There is limited service on the numbered lines: the 1/2/3 on the West Side; the 4/5/6 on the East Side; and the 7 between Manhattan and Queens.

However, *our entire system is affected* by the Con Edison outage.

In Manhattan, the bus is your best bet.

The Con Edison power outage affected signals on the D, F, M, A, C and E lines. Limited service was available on the numbered lines: the 1/2/3 on the West Side; the 4/5/6 on the East Side; and the 7 between Manhattan and Queens.

The MTA said customers should take the bus to get around Manhattan.

With signals knocked out at hundreds of intersections, WCBS 880's Steve Burns described a a chaotic scene on the roads as citizens stepped in to direct traffic until police could arrive and pedestrians lit up their phones and waved them around as they crossed the street.

Video of the scene here at 71 and Broadway. Dark on one side, light on the other @wcbs880 pic.twitter.com/LcZRmtqapx

The NYPD said only MTA buses were being permitted on 42nd Street to 74th Street between 5th Avenue and 12th Avenue.

Due to the power outage and disabled traffic control devices, vehicles should avoid W 42 st - W 74 st, 5th Ave - 12th Ave. Only @Mta buses will be permitted in the area. pic.twitter.com/s9olxhRwmS

Gov. Andrew Cuomo has directed the State Police, the MTA and the Public Service Commission to deploy personnel and resources to aggressively respond to the incident and work to restore power as soon as possible.

"While fortunately no injuries occurred as a result of this incident, the fact that it happened at all is unacceptable," Cuomo stated. "I am directing the Department of Public Service to investigate and identify the exact cause of the outages to help prevent an incident of this magnitude from happening again. Until the recovery is complete, we will continue to take all necessary actions to ensure the safety and security of New Yorkers."

The outage comes 42 years to the day since the blackout of 1977.