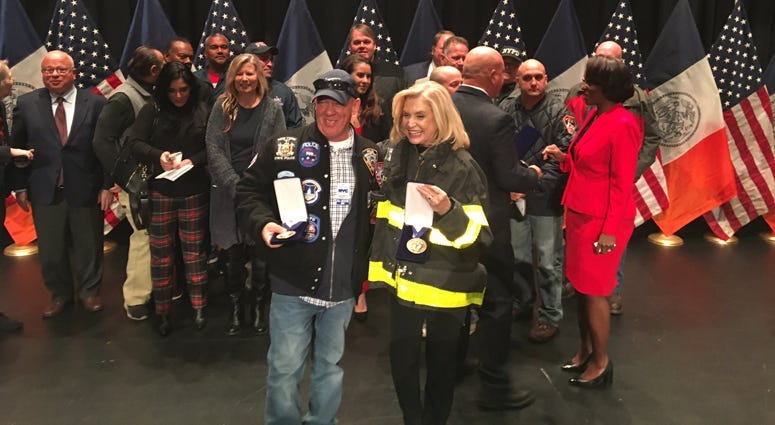 NEW YORK (WCBS 880) — Mayor Bill de Blasio presented the Bronze Medallion, the city's highest civic honor, to the individuals and groups that were instrumental in getting the 9/11 Victim Compensation Fund Act passed in Congress this summer.

"You should not have had to fight this fight, but thank God you did," de Blasio said as he honored 16 people, including elected officials and advocates, and two groups during a ceremony at the Beacon Theatre on Monday.

The honorees were first responders, construction workers, students and politicians on 9/11. Then they lobbied tirelessly to protect those exposed to the toxic conditions.

Lila Nordstrom, @lilainchelsea, was in HS on 9/11. Now she is one of 11 non-politician individuals honored with the city’s Bronze Medallion. Nordstrom and the others fought tirelessly for Congress to pass the 9/11 VCF. This is the highest civic honor. @wcbs880 #NeverForget pic.twitter.com/LLx37SjQy8

"As proud as we are of him for all he did, I'm proud of all that recieved this award today," said his brother, Phil, who accepted the award.

9/11 advocate @JohnFeal1 was battling from the beginning to see that responders, residents, students and workers were taken care of if they became ill. Today, he and others were honored for their work in fighting for the #VCF. Feal made 282 trips to DC. @wcbs880 pic.twitter.com/MSYL5rmqw2

"I think it's crazy that he's finally getting the justice that he deserved cause he is a hero and he should be known as a hero," said Zadroga's 18-year-old daughter, who was 4 years old when her father died.