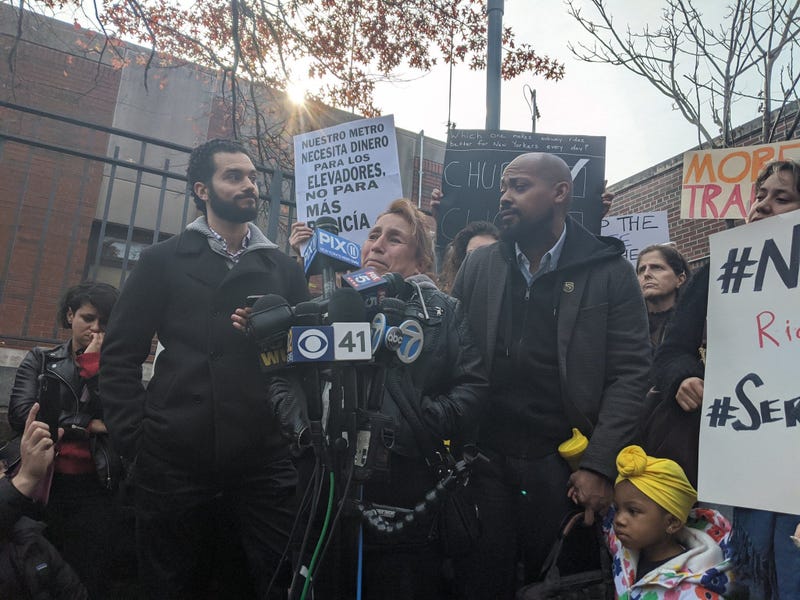 NEW YORK (WCBS 880) — Activists gathered Monday at a Brooklyn subway station to speak out on behalf of a churro vendor who was detained after she was seen selling the snacks inside the subway.

The “churro lady,” who identified herself only as Elsa, was detained Saturday after she pleaded with the police not to take away her cart.

On the video, recorded by Twitter user Sofia Newman, Elsa was seen being surrounded by four police officers as she was crying and asking them to allow her to keep her churros and exit the Broadway Junction subway station.

Officers told Newman that it was illegal to sell food inside the subway station and they warned her about the action multiple times.

The officers eventually handcuffed the vendor and took away her cart, but after the video surfaced, local lawmakers and community activists immediately spoke out against the officers’ actions.

Many blamed Gov. Andrew Cuomo for hiring 500 new MTA police officers to patrol the subways, saying the increased police presence will cause low income New Yorkers to be targeted for “trying to earn a living.”

RALLY❗️We’re coming together to say NO to over-policing and to tell Governor Cuomo (@NYGovCuomo) to cancel the 500 new cops and invest in more buses, trains and service instead!

Activists gathered at the station on Monday to urge Gov. Cuomo to rescind his decision to increase police patrols in subway stations to prevent this from happening again, but the Democratic governor stood by his plan.

“The feeling that subways are unsafe is up and I’m hearing it all over and I think the additional MTA police will be helpful in that regard,” Cuomo said.

He says the move is necessary as hate crimes, assaults and robberies are up in the subway stations.

But, Newman is suggesting Cuomo put money towards improving the trains and buses instead.

“Governor Cuomo do not hire the new cops. Invest in service instead. I take the subway every day and what these cops are doing does not make me feel any safer,” she said at the protest.

Advocates were also there to push the state Senate to pass a bill that will expand the availability for food vendor permits and create a street vendor advisory board.