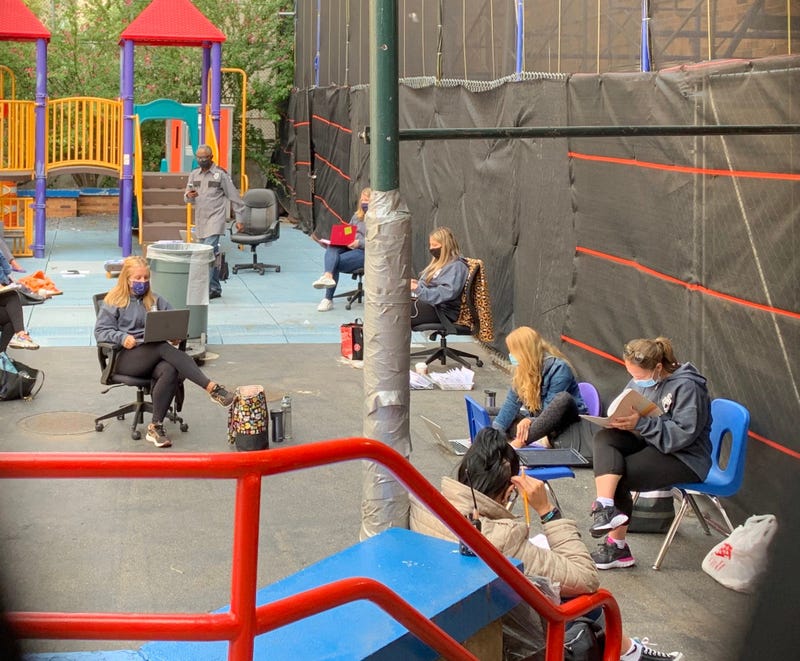 NEW YORK (WCBS 880) — Teachers at a Bronx elementary school gathered outside the building on Tuesday, refusing to go in as they claimed it was unsafe amid the coronavirus pandemic.

Teachers at P.S. 20, a pre-school through second grade school in the Bronx, sat in the courtyard and refused to enter the building over ventilation concerns.

"We are opening our windows, but then we learn that there is no ventilation in the hallways or the bathrooms,” explains Sarah Pashaow, a speech teacher at the school.

Alyson Bamford, who teaches English as a second language, says the Department of Education was made aware of the issues last week and were told the ventilation and exhaust fans were broken. However, teachers have yet to get a response.

“We would like a solution. So, unfortunately, we didn't hear anything last week and so that is why we are now outside hoping to get it fixed for our families for Monday,” Bamford said.

The teachers followed in the footsteps of staff at P.S. 139 in Ditmas Park, who sat outside on Monday working on their laptops and refusing to go into the building.

Art teacher Meghan Jonynas says when they came back to the school the air vents were dirty, there was no disinfection and one teacher had tested positive for COVID-19.

"And a big concern for us was it took the test and tracing three days to confirm and to contact the other people who could have possibly been involved or exposed," Jonynas said. "All last week we came in, we worked, and it became clear to us that we are not ready yet. When we first came in things were clean, as the week went on it became clear that it was quite possible that nothing had been sprayed yet, even though we were told we'd be sprayed every night. We are not sure yet if everything has been disinfected, it doesn't look like it had been. There were vents that were still dirty."

Teachers say the conditions required for schools to welcome students back in the classroom have not yet been met and staged a day of action Monday to pressure the mayor and Department of Education to switch to all remote.

Michael Mulgrew, president of the United Teachers Federation union, says New York City needs to start looking at what it agreed to when schools were slotted to reopen. He says currently, New York City is getting a failing grade and teachers may walk off the job.

Mulgrew raised the possibility of a lawsuit as well, over the lack of transparency in the test and trace program.

Last week, when at least 24 staffers across the city tested positive for coronavirus, some teachers claimed they were never notified by the city's contact tracers about those positive cases.

Meanwhile, Mayor Bill de Blasio is standing his ground, making it clear that after delaying the school start date once, next Monday will be the first day of school.

"I understand the unions will advocate and they will raise concerns, but friendly reminder everyone: the Department of Education, City Hall, we are the people who provide the services to our parents and our kids," de Blasio said Tuesday. "We've made it very clear what all the preparations have been. We've been talking about it for weeks and weeks. School is opening on Monday the 21st."

Regarding complaints of inadequate staffing, the mayor said the 2,000 teachers the city has just announced it has hired will help fill the gaps, and if it doesn't, the city will take more steps to address the issue.