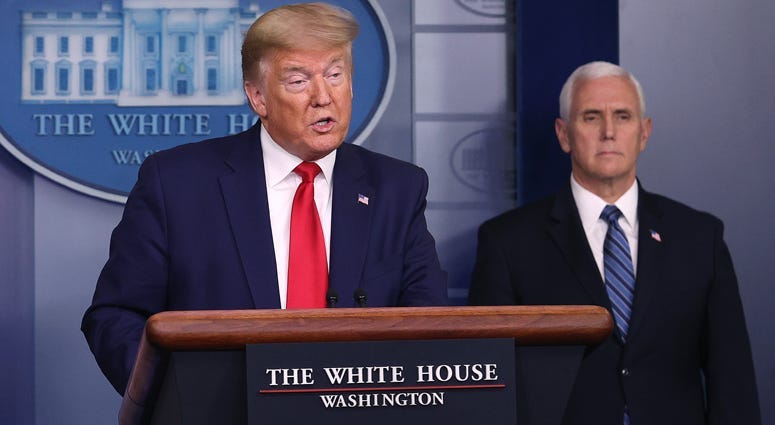 WASHINGTON (WCBS 880) — The Centers for Disease Control and Prevention is recommending the Americans voluntarily wear non-medical cloth face coverings while out in public as another protective measure against coronavirus infection.

This recommendation is being issued after new studies show the transmission from asymptomatic people is playing a more significant role in the spread of the virus than previously understood.

"The CDC is recommending that Americans wear a basic cloth or fabric mask, they can be either purchased online or simply made at home. These face coverings can be easily washed or reused," President Donald Trump said, stressing that this is voluntary and added, "I don't think I'm going to be doing it."

Trump emphasized that the CDC is not recommending the use of medical or surgical grade masks, which are being reserved for health care workers on the front lines.

The president said the new mask recommendations also do not replace the CDC's guidance on social distancing, including staying home when possible, standing six feet apart, and practicing hand hygiene.

Some have raised concerns the new guidelines could lead to a rush on masks.

RELATED: How To Make A Face Covering With A T-Shirt

The president also said he is signing a directive invoking the Defense Production Act to prohibit the export of scarce health and medical supplies by "unscrupulous actors and profiteers."

Homeland Security will work with FEMA to prevent the export of N95 respirators, surgical masks, gloves and other personal protective equipment.

"We meed these items immediately for domestic use, we have to have them," the president said.

Trump is also expanding the role of the Armed Forces in the coronavirus response effort with more than 9,000 retired Army medical personnel supporting field hospitals and medical facilities across the country, including in the military-run temporary facility at the Javits Center in New York City.

"No one is better prepared to win a war than the United State Military and we are in a war, the invisible enemy," the president said.