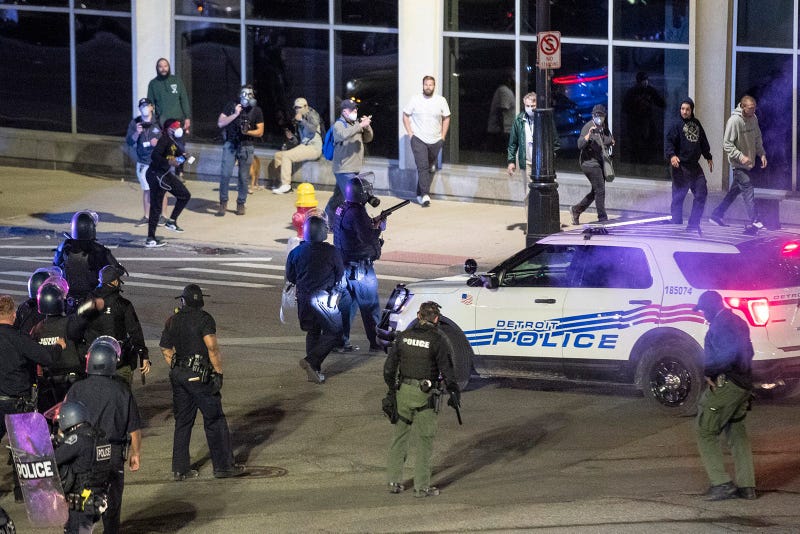 NEW YORK (WCBS 880) — Journalists are shocked by dozens of incidents in which reporters were harassed, attacked or arrested while covering the protests and riots sparked by the death of George Floyd.

Protests have spread across the county following Floyd’s death last week after a police officer knelt on his neck for several minutes.

Some of the protests turned into riots during the overnight hours and as journalists took to the streets to cover the events, many found themselves swept up by the violence.

According to the Associated Press, one organization has logged more than 230 incidents targeting journalists since Floyd’s death. The wire service also recorded video of at least two journalists being harassed by NYPD officers while covering arrests Tuesday night in Brooklyn.

Dan Shelley, executive director of the Radio, Television, Digital News Association (RTDNA) says his group has seen over 200 incidents of journalists either being threatened by protesters or police.

“In many cases – the most egregious cases – wantonly attacked mostly by police officers, unfortunately, just for doing their jobs and following lawful orders in the process of doing so,” Shelley explains.

He continued saying he cannot remember a time in recent memory in which journalists have been targeted for doing their jobs.

According to the AP, some of the most recent events included freelance photographer Jared Goyette being shot in the face last Wednesday by police using rubber bullets. In his ACLU lawsuit, charges were brought against more than 30 people who were set upon by authorities despite clearly identifying themselves as working journalists.

Freelance journalist Linda Tirado was also blinded in one eye after being shot in the face, the AP reports. MSNBC's Ali Velshi was fired upon after identifying himself as a journalist and being told, “we don't care.” Vice magazine's Michael Adams was thrown to the ground by police and pepper sprayed from inches away, the complaint said.

Photographer Lucas Jackson, who was hit by pepper spray and ammunition, told lawyers that “I've been hit because I've been in the wrong place before. I've never been aimed at so deliberately so many times while I was avoiding it.”

WCBS 880’s Scott asks Shelley what makes this situation so unique that journalists are facing such violence and harassment, to which Shelley responded that there were “several factors” at play.

“Number one, obviously, you have large protests on a nearly unprecedented scale in modern history going on simultaneously. Two, I understand the challenges that police officers face in such situations and number three, there's such raw emotion across the country and that has got to impact everyone, from the protesters all the way to the police officers. I think it's a combination of all of those factors,” Shelley said.

He notes the journalists are following the rules and there’s no reason for police officers to harass them, but he recommends reporters remain vigilant.

“In every case of which I'm aware, the journalists were following the rules. They were acting lawfully as they attempted to serve the public by seeking and reporting the facts of these incidences of civil unrest,” Shelley said. “My advice for journalists is to watch your back but don't back down. My advice to authorities is to keep in mind is that journalists are there to serve the very same public that you are serving. You serve it by trying to keep or reestablish the public peace, we as journalists serve it by trying to inform the public so that we can be their representatives and chronicled the events that are occurring so that every member of the general public doesn't have to show up at these protests.”

Since Floyd's death, there have been 233 reported incidents of assault, arrests or equipment damage against the press, according to the U.S. Press Freedom Tracker. Fifty-five of them have been in Minnesota, far more than any other state.

Nationally, there were 34 reported assaults against a reporter in 2019 — and 153 in the last three days, the AP reports.