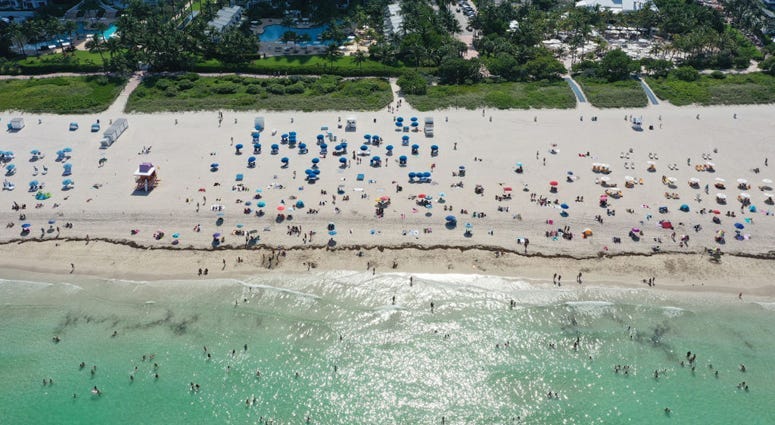 NEW YORK (WCBS 880) — Gov. Andrew Cuomo said he is considering requiring a 14-day quarantine for people arriving in New York from Florida as the Sunshine State sees an uptick in COVID-19 infections.

According to data released Thursday, the Florida Department of Health reported 85,926 coronavirus cases statewide — a jump of 3,207 cases from the previous day. It was the largest single-day increase since the pandemic began, shattering the previous record of 2,783 new cases recorded Tuesday.

According to new projections, Florida could become the country's next epicenter.

As New York comes out on the other side of the coronavirus pandemic, with infection rates, hospitalizations, and deaths on the decline, Cuomo said he's very concerned to see infection rates increasing in Florida and other states.

"We now have the virus under control, but Florida doesn't, and Texas doesn't, and these other states don't and what happens if they get on a plane and they get off at JFK? "Cuomo said. "Those people in those states may get on a plane, may land at JFK and this could start all over again. That's how we got here the first time."

Asked by a reporter whether he would consider a quarantine or extra measures at airports for travelers from Florida, Cuomo said he is considering it.

"I haven't made a decision yet, but I have had experts advise me of that... and it's something I'm considering," Cuomo said.

In March, when New York was the epicenter of the outbreak of the country, Florida and other states ordered people arriving from the New York area to self-quarantine for at least 14 days upon arrival.

"Talk about a full 180," Cuomo said. "For those people who don't remember back to day one, Florida and other states imposed a quarantine on New Yorkers. If you went to Florida, you had to quarantine for two weeks because they were afraid that New Yorkers were bringing the virus to their state. Fast forward, 100 days, now we're afraid they're bringing the virus to our state."

New York conducted 68,541 tests across the state Wednesday and 618 people — less than 1 percent— tested positive. It was the lowest percent positive since the state started testing.

At the peak of the outbreak, the percentage of people in the state testing positive was 50.4 percent.