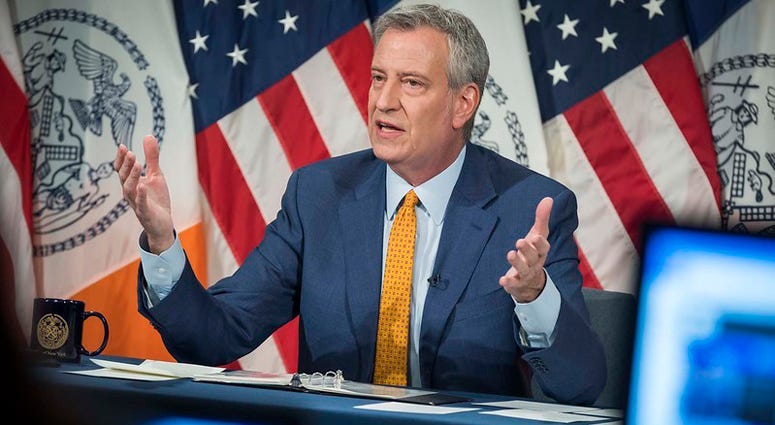 NEW YORK (WCBS 880) — Mayor Bill de Blasio said Monday that he believes New York City will likely meet the state's seven metrics to begin easing restrictions for the first phase of reopening sometime in the first half of June.

"The first half of June is the first opportunity to relax anything," the mayor said during his daily briefing.

According to the state, as of Monday, New York City has only met three of the seven criteria required to start easing restrictions.

"We clearly are making progress, there's several we've met and on the others there's been clear progress in the number of available hospital beds and number of ICU beds, those are two areas where we need to go farther, but we're getting close to those goals, and I think there's a point in the first half of June when we'll meet those. The number of contact tracers we've made very clear we expect to hit that goal in the beginning of June — we're confident we're going to get there," de Blasio said. "You can't guarantee anything in life, but if you're watching the trend lines both on our city indicators and state indicators, both will align in the first half of June."

"We've gotta then make decisions on exactly which restrictions to loosen up, exactly how, and we have to be confident that when we're doing it we can hold the line," the mayor added. "There's a real subtle balance that needs to be struck."

The mayor cautioned the last thing New York needs is a boomerang.

The mayor also announced city employees who are working from home will continue to do so for the foreseeable future.

Join us at City Hall for a COVID-19 update. https://t.co/FWtESgADIF

Meanwhile, new test kits that are being manufactured in the city are now available.

"Testing is still the core to everything," de Blasio said. "As of this very day for the first time the Made in New York City test kits are in use at Health + Hospitals community testing sites. By the end of the week more than 60,000 of these test kits will have been delivered and be in use and then we're ramping up from there."

There are now 150 testing sites open across the city. Anyone who wants to find a testing site can visit nyc.gov/covidtest.

The mayor also announced antibody testing for any first responders and health care workers who want it. Those interested should visit FirstSeroSurveyNYC.com or text "TestNYC" to 78378.

The mayor also addressed a rare illness that has now sickened 145 children in New York City, with 67 of them having tested positive for COVID-19 or antibodies.

"That's a lot to be aware of," the mayor said, adding that the best ways to keep children safe include good hygiene, face coverings, and social distancing.

De Blasio reported that daily indicators were positive for the most part.

There were 48 people admitted to hospitals, ICU admissions increased to 475 from 469 while the percentage of patients who tested positive remained at 11 percent.

The mayor said progress is being made overall.