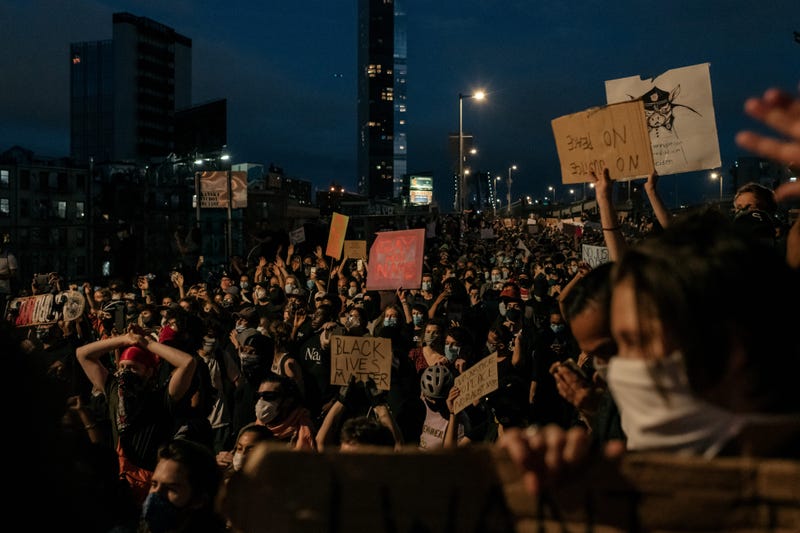 NEW YORK (WCBS 880) — The NYPD arrested at least 200 people Tuesday night on the sixth day of protests in New York City, and while isolated looting was reported in Manhattan, it didn't reach the severity of the nights before.

"Last night we took a step forward in moving out of this difficult period," de Blasio said at his daily briefing. He said protests were "overwhelmingly peaceful" and that the NYPD was "respecting the peaceful protest" after several nights of viral clashes and violent unrest.

The mayor said looting seen Monday night was largely absent but that the city planned to keep a curfew in place through Monday morning.

I’m at City Hall with an update. https://t.co/fyhPLO9hqS

The curfew begins at 8 p.m. each night and ends at 5 a.m. each morning until the morning of June 8.

"That will be in place including Sunday night til 5 a.m. Monday morning and that point we hope to lift the curfew, move forward, just as we are starting Phase 1 of out restart," the mayor said.

The mayor said “we might make some adjustments along he way” but that keeping the restrictions "is the right thing to do for just a few days as we address this situation and move forward."

At his daily briefing Wednesday, Gov. Andrew Cuomo also said the night had been much better compared to the previous two nights.

"It worked, we got results," the governor said. "Let's just remember what we did last night and keep that going."

Cuomo sought to distinguish the peaceful protesters from looters and vandals, saying "two very different situations are going on."

There are those who are trying to lump together the peaceful protesters & the looters. Attempting to blur the two.

We see through this cynical attempt to discredit a legitimate protest.

"One is protesting, the other is looting," the governor said. "Violence demeans the situation and loses the righteous indignation (at George Floyd's death)."

Cuomo said a relatively small number of "opportunists ... see the police are busy dealing with the protesters and they say, 'Well, here’s an opportunity to loot and to steal and cause mayhem.'"

As for bringing in the military to quell the unrest, as President Donald Trump has suggested, Cuomo said that should only be done in dire situations, which wasn't the reality in New York City this week.

The military cannot be used as a political weapon.

While Tuesday night was mainly peaceful, there was looting reported at the Zara at Broadway and Vesey Street, as well as at the Nordstrom Rack near 31 Street and 6th Avenue. Damage was also seen at several locations, including a Starbucks and FedEx store, near Astor Place in the East Village.

JUST IN: Zara in New York has been broken into pic.twitter.com/7MNbE3f2kn 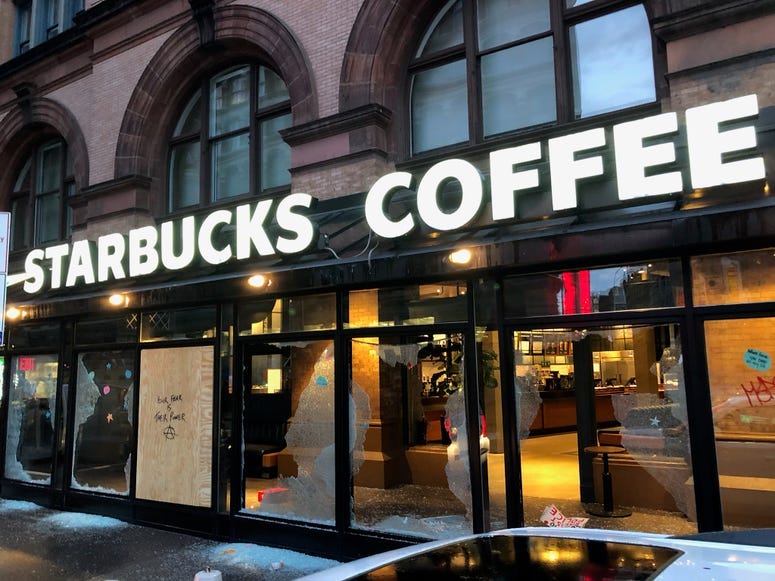 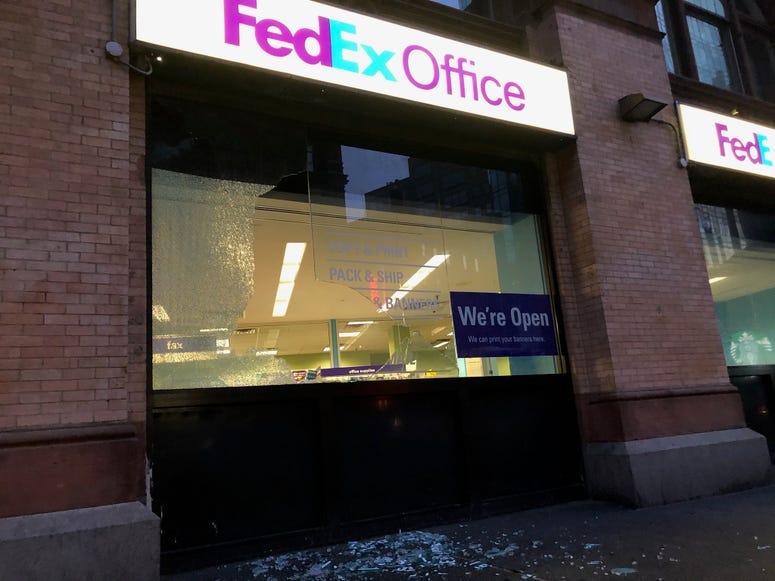 The Guardian Angels also faced off with looters at a Foot Locker in the East Village. Guardian Angels founder Curtis Sliwa may have suffered a broken jaw in the standoff, which saw the Angels linking arms around the Foot Locker as looters moved in, according to the Daily News.

But a show of force by the NYPD and an earlier curfew of 8 p.m. appeared to curb the widespread looting seen on Sunday and Monday nights.

Police Commissioner Dermot Shea, however, said there were still organized groups from the inside and outside the city that were trying to disrupt peaceful protests, some of them using bricks or water bottles.

"What the media has not neccasarily reported is that those waterbottles are often filled with cement, so we have vehicles that would appear as if our doors are hit with a Louisville Slugger,swung by, you know Mark Mcgwire," he said.

He made the comments a day after demonstrators came out in force determined to keep the peace on the sixth day of protests over the death of George Floyd in Minnesota last week, with thousands of people flooding the streets of Manhattan and Brooklyn, later failing to adhere to the 8 p.m. curfew imposed by officials hoping to bring an end to destruction.

In an effort to address the looting and violence that has followed mainly peaceful daytime protests, a citywide curfew will be in place through Sunday, running from 8 p.m. to 5 a.m. Vehicular traffic is banned south of 96th Street in Manhattan after curfew — with exemptions for residents, essential workers, buses and truck deliveries.

Mayor de Blasio visited the Barclays Center, which was the scene of a large demonstration earlier in the day, and said the situation was calm around 11 p.m.

"At Barclays Center now. Very calm situation. So far, the curfew is certainly helping, based on everything I’ve seen in Brooklyn and Manhattan over the last three hours," the mayor tweeted.

At Barclays Center now. Very calm situation. So far, the curfew is certainly helping, based on everything I’ve seen in Brooklyn and Manhattan over the last three hours.

Thousands took to the street in the afternoon and as the curfew time arrived, many remained to continue marching, with officers initially standing by and letting them.

As NYPD officers close down certain blocks on the UWS, the crowds turn and go elsewhere. You can hear the chants of, “peaceful protest.” pic.twitter.com/4oNd5KGWCr

The Associated Press reported officers later started ordering people to move along, and began taking people into custody. Demonstrators who had been on the West Side Highway in lower Manhattan were herded off, with parts of the roadway blocked off behind them.

After 9.p.m., at least 1,000 protesters tried making their way across the Manhattan Bridge to Manhattan, where a standoff ensued for over an hour between police and protesters. They were not let off the bridge and were gathered at the base at Canal and Chrystie streets, where there was a heavy police presence holding them back. The group eventually turned around to head back to Brooklyn.

After more than an hour of being penned in on foot of Manhattan bridge, protestors are headed back to Brooklyn pic.twitter.com/FXTGcbUKTg

Gigantic crowd on the manhattan bridge blocked by police. I spoke with an NYPD officer and asked him if they planned to hold people on the bridge indefinitely. He said “I don’t know.” pic.twitter.com/1UZ4wzLfJj

Thousand or so protestors who crossed the Manhattan Bridge into Manhattan met by a barricade of police. All looks to be peaceful. ⁦@wcbs880⁩ pic.twitter.com/kJJL2aE32i

There were some reports of trouble.

Livestream video showed people smashing windows of a local doughnut shop and as the group made its way up Eighth Avenue they encountered a small group of Guardian Angels standing guard outside a store. Some threw bags of garbage at the Guardian Angels, striking a few. Eventually, they backed off, with some in the crowd ushering the group to keep moving until two police vehicles dispersed the crowd further.

There were also reports of looting at a Zara store on Broadway and Fulton Street, where police were making arrests. Video from the scene showed a man shoving officers to the ground. A physical altercation then breaks out between the officers and two men.

Overall, incidents of looting were limited.

After some people broke into a Zara on Broadway lots of police arrived, by car, bike, on foot. pic.twitter.com/B2UWZ5hLfR

Demonstrations got off to an early start with videos on Twitter showing crowds gathered in Foley Square at around 1 p.m.

Others were seen marching in Greenwich Village and in front of City Hall.

Twitter will end up making this blurry, but this is what I can see of the #NYCPROTEST ongoing right now at City Hall. pic.twitter.com/Y66YGXkZ0u

The demonstration had been peaceful as NYPD officers stood by in case things turned ugly.

As the protesters made their way from one end of the city to the other, those at the front of the line made an effort to give no reason for any violence — clearing out crosswalks and taking a knee when people started shouting at officers.

WCBS 880's Kevin Rincon marched with protesters from Wall Street up to Gracie Mansion and back. Along the way, he observed people handing out water bottles and face masks to those without.

Group marching up 4th Avenue, on the side people handing out free masks. pic.twitter.com/2MqSLvvqxN

As the group made it to East 86th Street and East End Avenue, the crowd had swelled to an impressive size.

"It stretches beyond a mile," Rincon reported. "There is a sheer amount of people covering the streets."

Thousands are marching up Park Ave in #NYC as different groups merge together. Most in black. #BlackOutTuesday pic.twitter.com/4f74md7om8

At one point, health care workers could be seen applauding protesters as they marched by Memorial Sloan Kettering Cancer Center.

Outside Memorial Sloan nurses lined up to applaud the protesters. They clapped back and chanted thank you. pic.twitter.com/dsMZUn6HMX

Throughout the protest route, people inside their homes also showed their support for protesters, clapping and banging pots and pans.

About an hour before the curfew, several hundreds of protesters surrounded Trump International Hotel at Columbus Circle, where there was a line of NYPD officers guarding the front door. About 10 minutes before the curfew, the crowd grew significantly as it was joined by a second group of protesters. Police started flanking both sides, but as the curfew took effect, the crowd started marching down the street, preventing any clashes.

Trump International at Columbus Circle is surrounded by protestors with a line of NYPD officers guarding the front door. pic.twitter.com/zrpe9wD4fp

There were also large demonstrations in other parts of the city.

There were reports of as many 5,000 people at Union Square, mainly coming from Sixth Avenue and 14th Street.

Back at Union Square pic.twitter.com/G0GSd2w5nb

Outside the Barclays Center in Brooklyn, people laid down on their stomachs in solidary with Floyd, chanting "I can't breathe."

They remained there until after curfew and shortly before 11 p.m., police stepped in to disperse the crowd. Video on Twitter showed officers reportedly becoming aggressive with some people who would not comply.

Shortly before the curfew took effect, the mall at Columbus Circle could also be seen being boarded up to protect stores a day after looters smashed windows and ransacked stores in midtown, including the Macy's flagship store in Herald Square.

30 minutes before curfew here in NYC and stores are still being boarded up at the Columbus Circle mall. pic.twitter.com/5I6pNiQtQZ 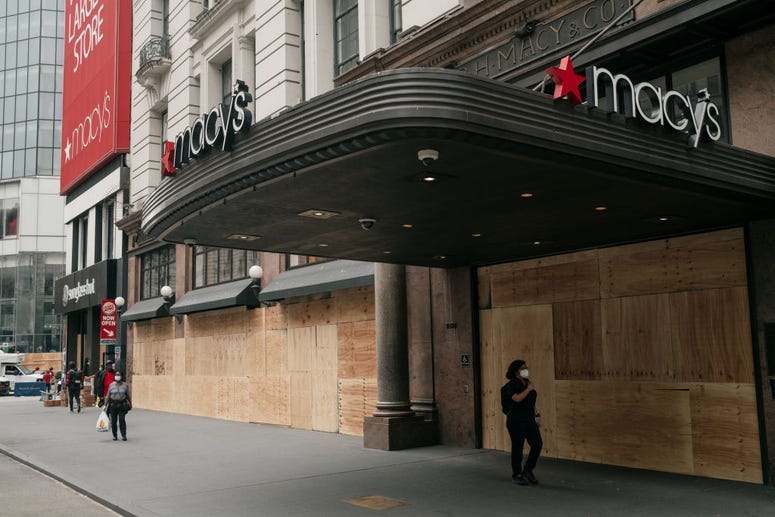 While Mayor de Blasio has denied help from the National Guard, Gov. Andrew Cuomo said 13,000 members are on standby.

Cuomo expressed outrage over the rioting in New York City that occurred overnight Monday and said the NYPD did not do it’s job in protecting communities or property.

The governor said he supports the peaceful protests but does not want to see anymore violence.

Floyd, a black man, died shortly after a video recording showed Derek Chauvin, a white officer, kneeling on the back of his neck for more than eight minutes. Floyd repeatedly told the officer he could not breathe, but the officer did not remove his knee.

Protests demanding justice for Floyd and calling for an end to police brutality have erupted in cities across the country. Many turned violent with looting, arson and rioting happening overnight.