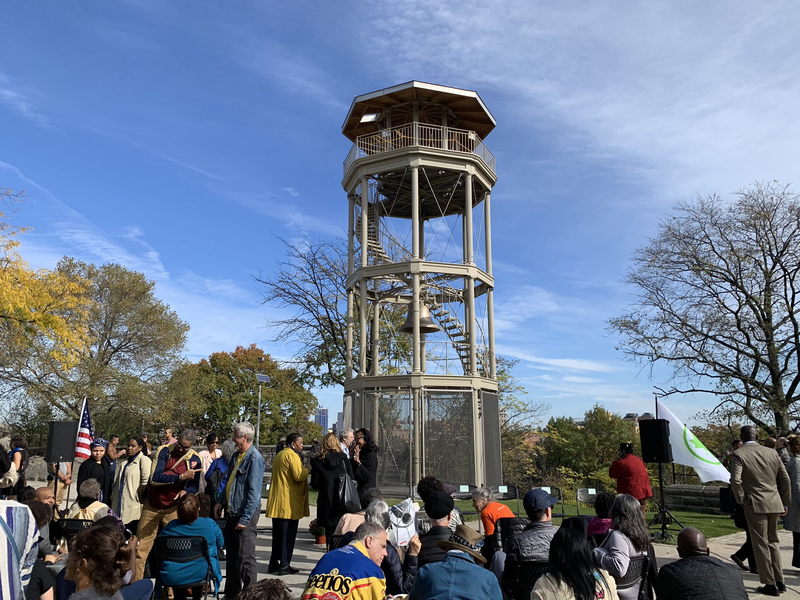 NEW YORK (WCBS 880) — Harlem residents on Saturday gathered in a local park to celebrate the restoration of a landmark in the neighborhood.

In New York’s early days, before fire alarms or even poll boxes, volunteers would perch themselves high above the city in watch towers and ring a bell at the first sign of smoke.

New York City had about 11 towers throughout the boroughs at one point but in 2019, only one remains, as WCBS 880’s Steve Burns reports.

The 47-foot cast-iron tower in Harlem’s Marcus Garvey Park is a reminder of what life was like before modern technology.

Back before fire alarms or even pull boxes, it was up to volunteers perched on these towers to ring the bell at the first sign of smoke. The city had 11 of them. Only this one remains. @mitchell_silver got the ceremonial first ring pic.twitter.com/ZVxFL7HuJL

The watch tower was built in the 1850s but over the years, it fell into disrepair, according to Asberry-Chresfield.

The tower was brought down in 2015, but the city promising it would rise again, fully restored.

“Oh my goodness. The tower is absolutely beautiful now. They've restored it to its original color and its original state,” Asberry-Chresfield said.

The overall effort to restore the tower cost about $8 million, which was funded by a number of grants.

And here’s the view after you climb all 52 steps. Can see everything from Midtown skyscrapers to the Bronx and GWB. (Unfortunately the top will be off limits to the public most times) @wcbs880 pic.twitter.com/2Epko6FK3S

The watchtower was named a New York City landmark in the 1960s and listed on the National Register of Historic Places about a decade later.

The tower has yet to open for tours, but the Marcus Garvey Parks Alliance is hoping to change that in the future.