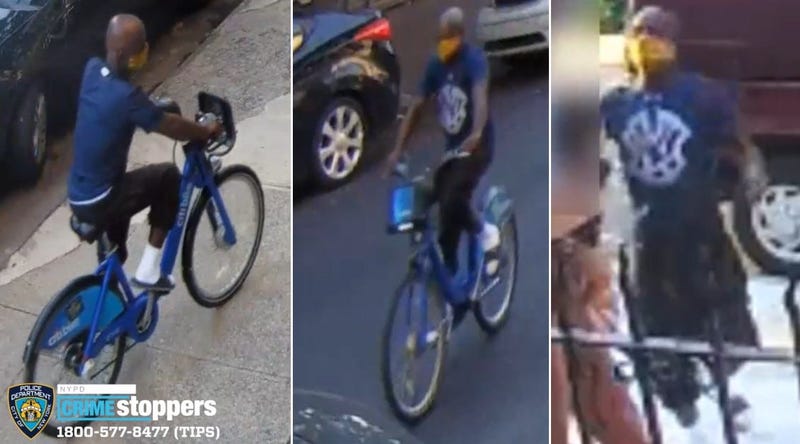 NEW YORK (WCBS 880) — A woman walking with her infant child in her arms had her jewelry ripped from her neck in a seemingly random attack on Sunday, police said.

The 39-year-old victim was walking with the infant in her arms on Halsey Street in Bedford-Stuyvesant at around 6 p.m. when an unidentified man approached her on a CitiBike bicycle.

Police say he yelled at her, causing her to stop walking. When she did, authorities say the man reached out and ripped off the chain that she was wearing around her neck.

The man then fled the scene on the bicycle, heading westbound on Halsey Street.

The woman and her infant did not sustain any injuries.

The individual is described as a bald male, black who wore a yellow mask over his face, a blue shirt with the NY Yankees logo on the front, black pants, white socks and black slippers.

Video and photos released by police show the man riding the bicycle in the street.

Anyone with information in regard to this incident is asked to call the NYPD's Crime Stoppers Hotline at 1-800-577-TIPS (8477) or for Spanish, 1-888-57-PISTA (74782). The public can also submit their tips by logging onto the CrimeStoppers website at WWW.NYPDCRIMESTOPPERS.COM or on Twitter @NYPDTips. All calls are strictly confidential.