NEW YORK (WCBS 880) — Resident-only restrictions will be in place this Memorial Day weekend at beaches in Westchester, Nassau and Suffolk counties, along with capacity limitations.

He noted that he was happy with what he was seeing early in the day.

“The is exactly the kind of behavior we want to see out here,” he said pointing to a number of residents on the beach. “We’ve tried to just remind people make sure the beach is set up for people to have that kind of great experience without compromising health.”

Hall reports there are signs throughout the beach to remind people to maintain social distance. Beach blankets must be set up at least 10-feet from one another and staffing is patrolling to make sure everyone is adhering to the rules. 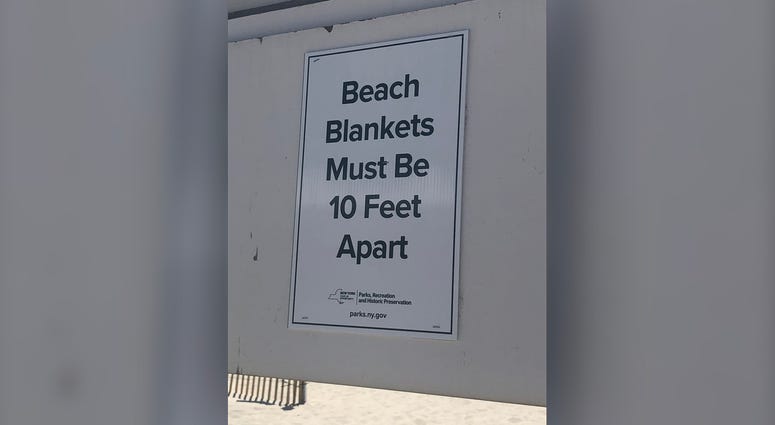 “Our whole mode with people is to sort of gently say, ‘Hey, can you split this up, you get a little close,’ ‘this is not appropriate behavior.’ We take a gentle approach,” Kulleseid said.

The commissioner said he wants everyone to enjoy themselves.

Nassau and Suffolk have closed their county-run beaches to everyone besides residents.

WCBS 880’s Steve Burns spoke on Thursday with Suffolk County Executive Steve Bellone who said if you're paying for staffing and upkeep at these beaches, you should have first dibs at using them.

“We had to say, for those capacity reasons, that we need to prioritize these facilities for our residents,” he explains.

Bellone agrees with his counterparts in Nassau and Westchester.

“We will be checking licenses or, what we have, green key cards for Suffolk residents,” Bellone explains.

Westchester County Executive George Latimer told WCBS 880's Steve Scott on Friday that they will be vigilant this weekend.

“First thing is in opening the beaches in Westchester County, we know that we've got to have social distancing, we have to reduce our capacity, to where with the beach might have as many as two thousand people out and we have to keep the number under one thousand. And we’re gonna have to manage demand, because most of the society has been you know sort of locked down and away from a variety of recreations,” Latimer said.

In accordance with state rules, he says beaches will be limited to 50% of their usual capacity.

“We've made the decision while New York City beaches are closed, that we're going to have to limit our beaches. We have two of them that we’re opening – they’ve relatively small – to Westchester residents," he said. “We have a couple of entrances on each of these beaches that really control the flow.”

Latimer notes that signage will be up at both beaches reading “Westchester Residents Only.” There will be enforcement out at the beaches to check IDs to ensure nobody is sneaking into the beach.

Though, it won't last forever.

Latimer assured Scott on Friday: “Once New York City can open its beaches, then we don't have any problem having other people come in.”