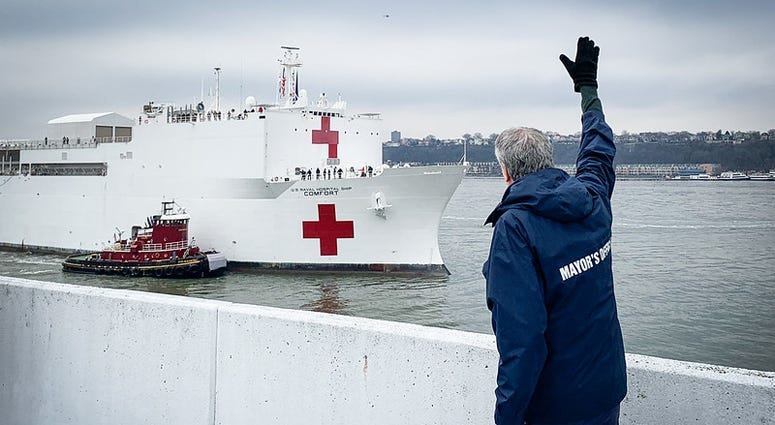 NEW YORK (WCBS 880) — The U.S. Navy's hospital ship the USNS Comfort has arrived New York City to help in the war against the coronavirus pandemic.

The Comfort set sail from the Norfolk Naval Station in Virginia on Saturday and arrived in New York Monday, four weeks ahead of schedule after undergoing maintenance.

Cheering could be heard as the ship passed by the World Trade Center on her way to Pier 90 in Manhattan.

Mayor Bill de Blasio said the arrival of the Comfort brings hope to the residents of New York City.

"We've all been through a lot these last few weeks and we needed this boost, we needed this hope," de Blasio said Monday as he welcomed the Comfort. "This ship arriving is not just an example of help ariving in a physical form, it's not just about the beds and the doctors and the equipment, it's also about hope, it's also about boosting the morale of New Yorkers who are going through so much, it's about saying to our heroes in those hospitals that help has come; that relief is on the way."

"I can't tell you how much this means, it is so much more than even we realize at this moment, that our nation has heard our plea for help here in New York City and there could not be a better example of all of America pulling for New York City than the arrival of USNS Comfort," the mayor added. "It's a major, major moment in this long battle that we will fighting against the coronavirus."

This is not the first time that the hospital ship has been deployed to help New York. In 2001, the Comfort was docked in Manhattan to assist in the aftermath of the 9/11 terrorist attacks.

"I remember having the Comfort come then, and we didn't need it for what we need it for today, we didn't need it for people who needed hospital care, it wasn't necessary but we brought it in. We needed it for crisis counseling," said FEMA regional administrator Thomas Von Essen who was the FDNY commissioner during 9/11. "The federal government — the Army, the Navy, the Marines — they've always been here for us when we needed them and they're here again for you now."

On Monday, the nationwide death toll reached 2,978, exactly one more than the amount of lives lost in the 9/11 terror attacks.

"For me the flashbacks that I get knowing that the city is under such stress now, it's real personal for me. The fire department, I spent 30 years in it, so when Sept. 11 happened it was personal. Everybody was affected by Sept. 11th and that's what's happening now. Everybody you know is affected by the coronavirus," he added.

De Blasio said the city needs to triple hospital bed capacity in New York City by May and the Comfort is "like adding a whole nother hospital to New York City."

Captain Patrick K. Amersbach, commanding officer of the Comfort, told WCBS 880 that they are planning on accepting patients within 24 hours of arriving in New York City.

The ship has 1,000 rooms along with 1,200 personnel who will help relieve some of the pressure on the city's hospitals by treating non-COVID-19 patients, freeing up space for those who do have the disease.

"We are going to provide the maximum amount of care that we possibly can," Amersbach told anchor Joe Avellar. "We will be working with the communications center out of the Javits Center with doctors aboard the ship. They will screen the patients before they arrive to the ship and they're still working out those details but the majority of the patients that we will be taking aboard the ship will be medical patients versus surgical patients."

The Comfort began its life as an oil tanker but was outfitted to become a hospital ship in 1987 to carry up to 1,000 active duty wounded and ill as a result of a major combat operation. In addition to its 12 operating rooms, it is outfitted with a pharmacy, labs and oxygen making plant.

#USNSComfort - Next Stop - New York City 🗽
"...our nation, specifically the people of New York, have requested our assistance and we are ready to respond." Capt. Patrick Amersbach, CO, Medical Treatment Facility, aboard Comfort. #COVID19
Get the details: https://t.co/I7kKIDPdkX pic.twitter.com/8lrmLXJcga

"We have the ability to produce our own medical grade oxygen, we can produce water aboard the ship, we have enough storage and supply for our crew of almost 1,2000 for, well, it depends on the duration of the mission," Amersbach said. "The good thing is we have a very strong and capable logistics train that will be able to resupply as needed.

Amersbach said crew on board the ship are practicing social distancing, disinfecting the vessel, and following the same guidelines issued to the American people by the CDC including frequent hand washing and no face touching.

The captain said the Comfort is proud to serve the people of New York and this country.

"We're going to do everything we possibly can for the people of New York and we will be there until the mission is over," Amersbach said. "We are proud to be part of the response up there and actually be able to support our own people. This is our nation, it's not just a global thing, but it's in our own hometown. So we are very proud to be part of this mission." 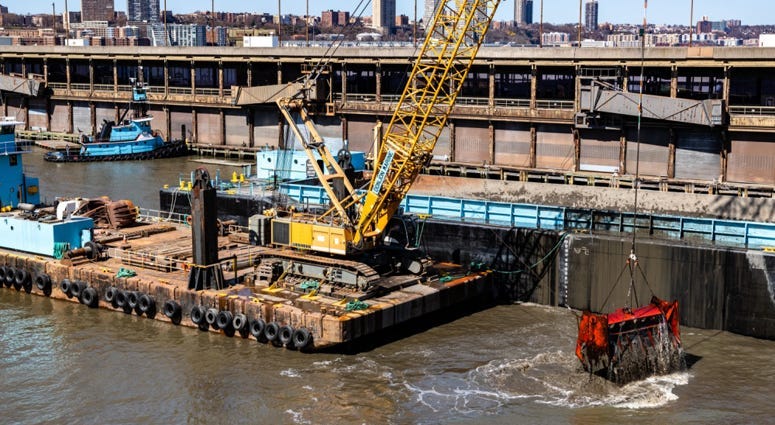 In preparation for the Comfort's arrival, the slip had to be dredged. If set on end, the Comfort would be the 13th tallest building in New York City.

The USNS Mercy is performing a similar mission in Los Angeles, California.