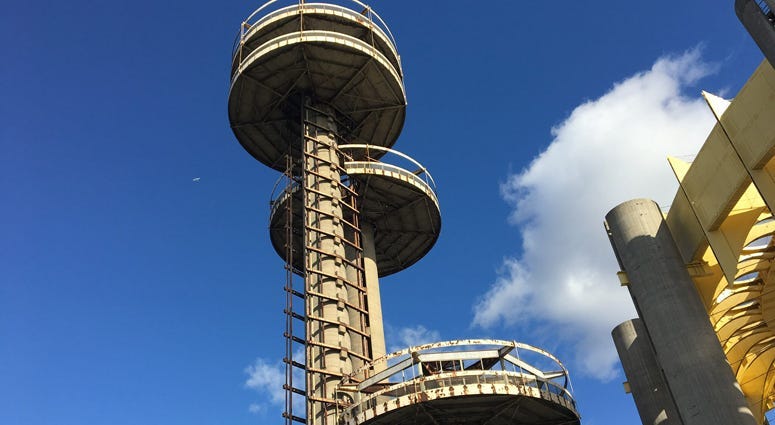 NEW YORK (WCBS 880) — Once a focal point of Flushing Meadows–Corona Park, the storied New York State Pavilion will be getting a facelift in Queens.

The city broke ground Friday on the reconstruction of the three rusting and decaying observation decks, as well as the steel and concrete Tent of Tomorrow.

The pavilion was designed by renowned architect Philip Johnson and gained renewed fame in the movie "Men In Black."

The rusting and decaying NYS Pavilion will be getting a $24mil face lift. The relic of the 1964 World’s Fair in Queens will have concrete and steel repairs, as well as the installation of architectural lighting. The towers were featured in the movie “Men in Black.” @wcbs880 pic.twitter.com/kZT6KulW21

During the 1964 World's Fair, the structures captured the imagination and the observation decks, with the tallest standing at 226 feet, were the literal high point of the event.

"This here was the VIP lounge, the lower one, that's where all the visiting dignitaires would come. Robert Moses and everybody else would come there. The last two were the observation decks," said 70-year-old John Piro, who has battled to preserve the pavilion. "It was magical."

Piro's been instrumental in having the iconic structure preserved and the city is now spending $24 million dollars on it.

"It's gonna come back, but yet it still has that space-age, beautiful look from the 60s," Piro said. "It's time capsule."

"We're gonna do some repairs, but the most significant change, is we're going to now light up the towers," Silver said. "This is really a way of respecting the past but honoring the future by little by little restoring some of these iconic elements."

The observation decks will remain closed.