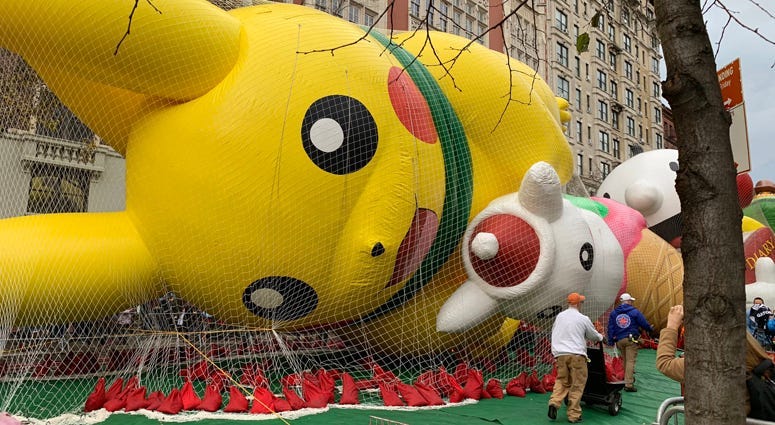 As crowds gathered near the Natural History Museum to watch the balloons come to life at the annual Thanksgiving eve inflation event, the question on everyone's mind was "Will they fly?"

There are strict measures in place to avoid a repeat of 1997, when high winds sent the “Cat in the Hat” balloon into a light pole. The pole ended up falling on to a spectator, who was critically injured.

NYPD Chief of Patrol Rodney Harrison says whether or not the balloons fly will be a game day decision.

“We have people from all around the world, not just out of town, all around the world coming to watch this event. Safety is paramount, but, at the end of the day, we would like to do the best we can and make sure the event goes smoothly and safely,” he noted.

The balloons were only grounded once before, in 1971. If the balloons are grounded, the parade continues with floats, performers and marchers as usual. West 77th and 79th streets have already been closed off to make way for the giant floats, as WCBS 880’s Marla Diamond reported.

Each balloon gets a police escort worthy of a head of state and the NYPD has a risk profile for each balloon, according to Harrison.

“Each one has a predetermined flight risk and once again is we have a supervisor assigned and we have connection or contact with the anemometers,” he said.

Here at the big Macy’s balloon inflation, and this may be your only chance to see them this year. Expecting wind gusts above 30 mph tomorrow. City regs say balloons don’t fly with gusts over 34 mph. @wcbs880 pic.twitter.com/OJhqBgIdw1

The New York City area may experience wind gusts up to 45 miles per hour beginning Wednesday evening and could potential last through Friday night.

With the high winds, other parts of the city are also preparing – including the Department of Buildings, which has advised property owners, contractors and crane operators to take precautionary measures.

Homeowners are being told to secure all loose and lightweight objects (such as lawn furniture and garbage cans) and secure any potentially dangerous outdoor objects (such as has grills or propane tanks).

High winds may ground balloons for the #MacysThanksgivingDayParade with winds gusting over 40 mph: https://t.co/Mys5hxkPhN pic.twitter.com/zdWmQTmUr4

There’s also worries that the extreme weather may knock out power to some areas of New York. However, PSEG Long Island says it’s ready and standing by for any service disruptions.

“A strong storm response is part of our mission at PSEG Long Island and we spend all year preparing for events like this,” said John O’Connell, vice president of transmission & distribution at PSEG Long Island. “We want our customers to have a happy Thanksgiving, so our crews will be on duty this holiday, ready to respond safely and as quickly as possible to any service interruptions