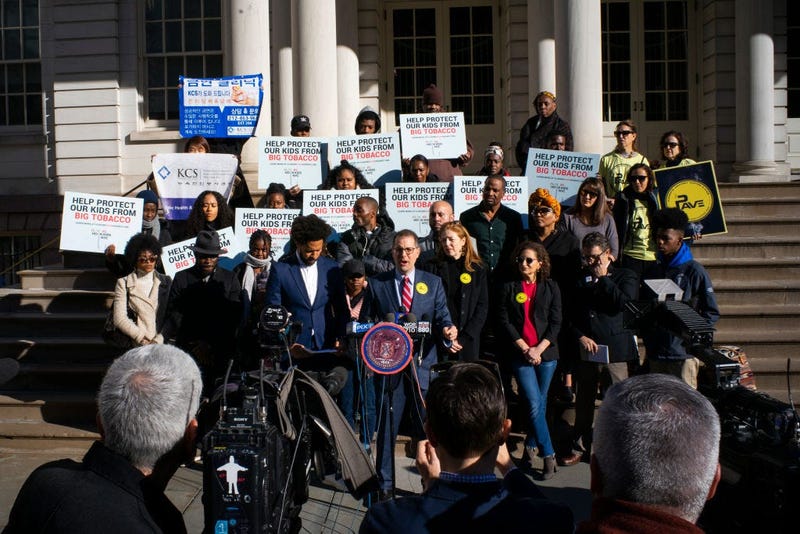 While a state ban is being held up in the courts, a ban on all e-cigarette and e-liquid flavors except tobacco passed the full City Council by a vote of 42-2, a day after a unanimous vote in support of the legislation from the City Council’s Health Committee.

"We are taking a momentous step to protect the health of our young people," said Councilman Mark Levine, the bill's sponsor who represents parks of the Upper West Side and Washington Heights and chairs the health committee. "We have waited far too long. This country has been asleep at the wheel, as the epidemic of teen vaping has spread."

He adds that the move will hopefully lead to a decline in teen vaping.

“In New York City, as elsewhere, the estimate is that one in four high school students, and one in 10 middle schoolers has vaped in the past year,” he said.

Opponents of the ban, however, said the ban will now fuel the tobacco industry. They dropped $400 in singles from the balcony onto council members while shouting “big tobacco thanks you” after the vote.

Spike Babion, who owns four vape shops in the city says: "We are infuriated right now. We are very careful about the rules. We think that it's important that people understand that this is not a product for youth," Babion said.

The vaping industry say they are helping smokers quit traditional cigarettes and giving them a safer option.

The ban makes the sale of fruity flavored electronic smoking products such as cotton candy and bubble gum illegal, leaving tobacco-flavored vape pods the only variety that can be sold in the five boroughs.

A second bill also would menthol cigarettes. Anti-smoking advocates in the minority community like Andre Richardson, with the group Flavor Hooks Kids, are urging the council speaker to bring it to a vote.

"This is the flavor that big tobacco has peddled through the black community for decades upon decades with hypnotic advertising and sinister techniques to hook our communities," Richardson said.

Vaping has been linked to nearly 2,300 cases of lung injury and 47 deaths nationwide. Last week a 30-year-old Manhattan man died and last month a 17-year-old in the Bronx died of a vaping-related illness.

Mayor Bill de Blasio is expected to sign the bill into law.