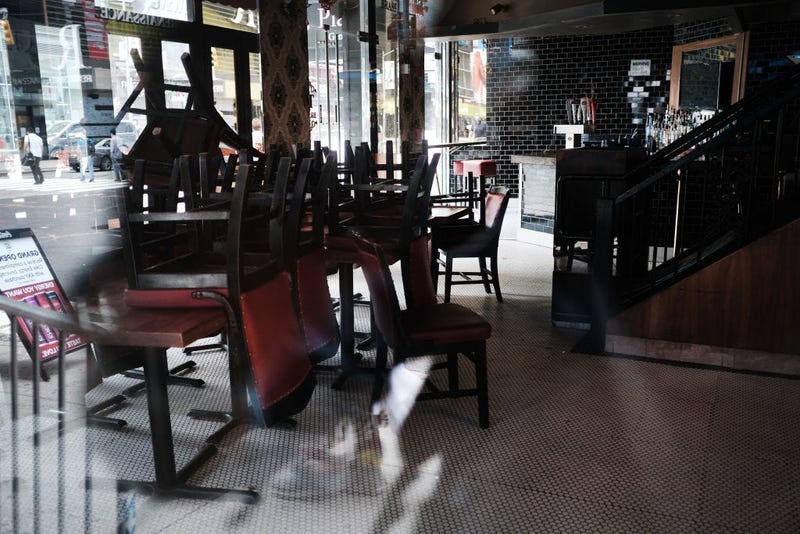 NEW YORK (WCBS 880) — Indoor dining returns to New York City next week but, the class action lawsuit filed by nearly 200 restaurants is not going away.

The lawsuit filed against New York State and New York City originally demanded a return to indoor dining in some capacity. Though, now that Gov. Andrew Cuomo has allowed it to resume at 25% capacity, restaurants are pushing for an expansion.

Tina Maria Oppedisano says it's endlessly frustrating going to work every day at Il Bacco restaurant in Little Neck, Queens – where indoor dining is still banned – but she has been able to look down the block at Nassau County and see restaurants operating indoor dining at 50% capacity since June.

“We want to be treated fairly,” she said.

Indoor dining resumes in the five boroughs at 25% capacity on Sept. 30, but Oppedisano says that’s not nearly enough to make up lost revenue.

She notes that some places won’t even be able to operate with such a limited amount of space.

“Smaller size restaurants, they're not even gonna open up with 25% cause it's not worth it,” she explains. “At this point we would take 50%, just because that’s what Nassau and Suffolk county were given.”

The class action lawsuit Il Bacco had been leading has now been amended – they want to see 50% capacity to level the playing field with Long Island.

The lawsuit is also demanding that city-specific rules, such as no bar seating, needs to be amended. Oppedisano says it’s absurd to treat the five boroughs so differently than other parts of the state.

“We're not allowed to seat people at our bar, which they are. We have to do temperature checks for every single guest when they walk in,” she explains. “I spoke to some of my customers, they’re like, ‘You go down the block and we don’t have to do any of that.’”

Long Island and other parts of the state have been allowed to do indoor dining at some capacity without the modifications for months and New York City restaurant owners say they’ve been forgotten about.

Gov. Cuomo has said city restaurants can increase to 50% capacity by November, providing coronavirus numbers remain where they are now at under a 1% infection rate.