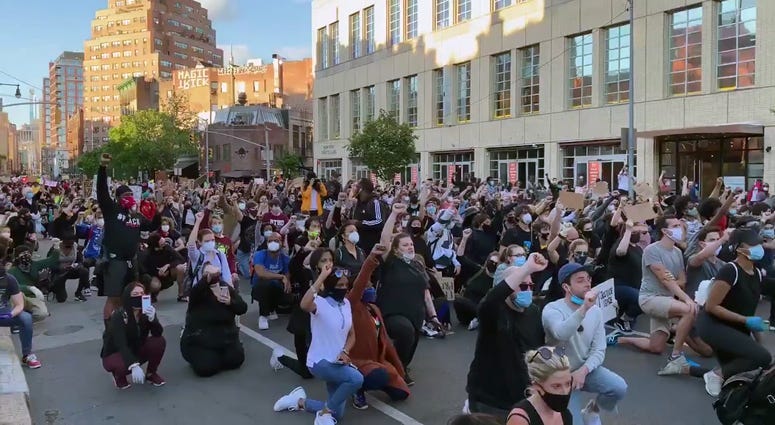 NEW YORK (WCBS 880) — Amid intense clashes, looting, fires and  vandalism, there were moments of peace Sunday during the fourth day of protests over the police custody of George Floyd in Minneapolis a week ago.

There were gestures from police officers intended to show sympathy with marchers.

At Jamaica Station in Queens, video from Facebook showed protesters gathering to take a knee while reading names of black men and women who have died in police custody.

Kneeling with them were NYPD officers.

NYPD Commissioner Dermot Shea retweeted the video saying, "We need more of this, to see and hear each other, to work together, to recognize that our differences are our strength."

We need more of this, to see and hear each other, to work together, to recognize that our differences are our strength. #onenewyork https://t.co/JRzQW7uI78

At Barclays Center an officer was also seen kneeling in solidarity.

Later in the night, police leadership and protest organizers outside Barclays Center started talking, shook hands and then were photographed raising their arms up together, showing that there was a concerted effort to keep things peaceful, WCBS 880's Steve Burns reported.

Amid intense clashes, looting, fires & vandalism, there were moments of peace during tonight's protests in #NYC.@StvBurns captured this photo earlier outside @barclayscenter, showing police leadership & protest organizers raising their arms up together. https://t.co/SdXaA7U1xT pic.twitter.com/8AvAVXBhcC

In Foley Square, after about 15 minutes of speeches, protesters started chanting for the NYPD to join them in taking a knee. The officers then knelt with protesters in a show of solidarity.

But the NYPD has come under criticism for other interactions with demonstrators over the weekend, including a confrontation in Brooklyn on Saturday when two police vehicles appeared to plow through a group of protesters.

Commissioner Shea said the confrontation is one of "about six" that the department's internal affairs bureau is investigating.