NEW YORK (WCBS 880) — The coronavirus outbreak is taking its toll on the NYPD.

As of Friday, 442 uniformed officers and 70 civilian members have tested positive for the coronavirus.

Another 4,111 NYPD uniformed employees were on sick report, accounting for 11.4% of the Department’s uniformed workforce.

The department has lost two civilian members to the virus.

The NYPD confirmed Friday that Giacomina Barr-Brown, a Civilian Member of the Service, died Thursday night in her home.  Barr-Brown, seven-year veteran of the NYPD,was assigned to the 49th Precinct Roll Call Office, where she helped to ensure that patrol and administrative assignments were adequately covered on a daily basis.

On Thursday, NYPD Commissioner Dermot Shea posted a video on Twitter confirming city custodial assistant Dennis Dickson, who served with the NYPD since 2006, died from complications related to the coronavirus at Kings County Hospital in Brooklyn.

"Today we lost one of our own,” Shea said. “Custodial Assistant Dennis Dickson, a member of the NYPD since 2006. When Hurricane Sandy struck, he worked 17 days straight and since the coronavirus has struck New York City he's been keeping the NYPD safe so our officers can keep you safe.” 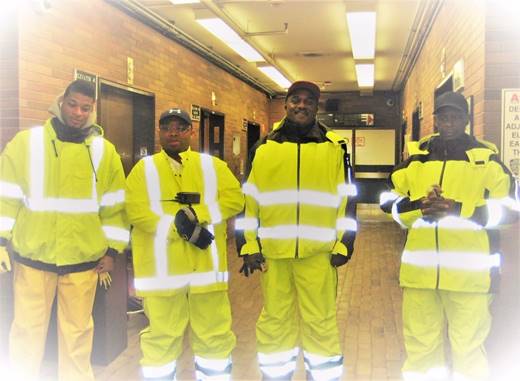 The 62-year-old Dickson was a custodian assigned to Police Headquarters.

"Mr. Dickson was a revered member of the custodial staff at Police Headquarters once spending 17 days at the headquarters building during Super Storm Sandy assisting with emergency cleanup operations," the department said in a statement. "Mr. Dickson was again on the front line cleaning and disinfecting 1 Police Plaza so that our personnel could be here safely, allowing them to continue to serve the people of the City Of New York."

We are sad to announce the passing of our own NYPD family member, Custodial Assistant Dennis Dickson. Mr. Dickson faithfully served this department for 14 yrs & is the 1st member to succumb to the COVID-19 virus. Our thoughts go out to his loved ones during this difficult time. pic.twitter.com/YIKzhMXsuc

The commissioner said the NYPD family is sending thoughts and prayers to Dickson’s friends and family.

Today we lost one of our own:

City Custodial Assistant Dennis Dickson, who faithfully served with the NYPD since 2006, has passed away from complications related to the coronavirus.

Our deepest sympathies & all of our prayers go out to Dennis’ colleagues & family.#NeverForget pic.twitter.com/EOcWNsBAHY

There are also reports that NYPD Deputy Commissioner for Counterterrorism and Intelligence John Miller is hospitalized in serious condition with coronavirus symptoms and is awaiting testing.

In an interview Friday morning with WCBS 880, Shea told anchor Steve Scott that he would not go into specifics on individual members and their health, but said he's spoken to Miller and he is doing well and will be okay.

Shea said keeping his members safe is paramount and for now they have the supplies they need to protect their members but the department is making the accomodations to get more equipment where needed, when it's needed.

"We're trying to be conscious, make decisions about how we conseve, but we do not want to be in a position where we have them on reserve and they're not in the hands of those who need them," Shea said. "It's an ongoing process, and it's something that we're definitely concerned about."

As more people are self-isolating and staying home, Shea said the overall major crime reported to the department has declined significantly, but they are seeing some spikes.

"We're seeing a drop in radio calls, we're seeing a drop in people on the street for the obvious reasons," Shea said. "We had a tough day yesterday in New York City with several homicides, we have some burglaries occurring, some car breaks occurring throughout the city. So the city that never sleeps is slumbering a little bit, but its definitely not sleeping."

Shea assures the public that the men and women of the NYPD are out on the streets to keep New Yorkers safe, fighting traditional crime, enforcing social distancing rules, making sure establishments are closed and even delivering groceries throughout the city to senior citizens who should not be venturing out at the moment.

"It's a struggle and we're pulling from different parts of the department, but we are very well resourced," Shea said. "So we're doing all of that and we will get through this together," Shea said.

Officers have been enforcing social distancing with the assistance of clergy and community leaders and educating the public on how to flatten the curve. The NYPD is using its helicopters over parks and pedestrian plazas to assist patrol officers on the ground.