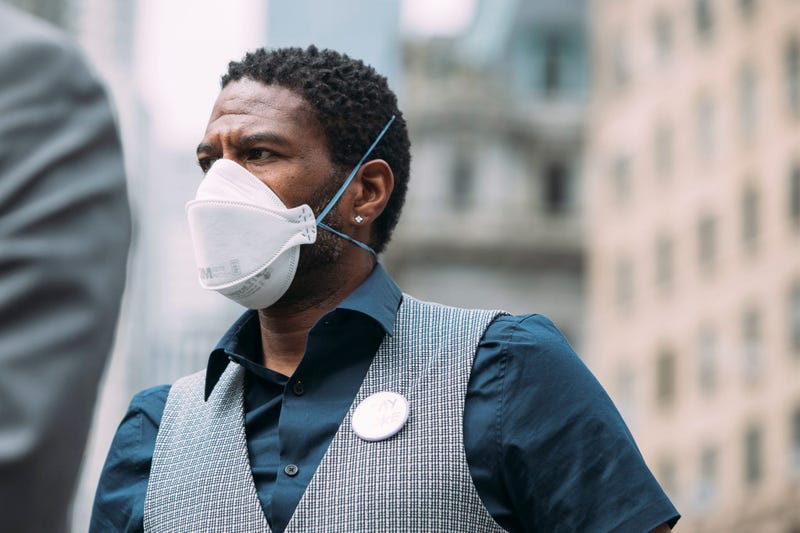 Williams said the last time they felt the need to rally like this was when former Mayor Michael Bloomberg implemented the stop and frisk policy.

“Sadly, we have Mayor Bill de Blasio who is supposed to be the complete opposite of what we have fought against and right now he has not provided any leadership when it comes to the protests that are going on right now,” Williams said.

Williams echoed calls made earlier this week for funding to be diverted from the NYPD and given to youth and social services across the city.

Public Advocate @JumaaneWilliams critical of Mayor de Blasio saying he’s failed to offer leadership during all of the protests against police brutality. pic.twitter.com/RIZ4ERCC00

“We want to see $1 billion moved from the police department,” he said. “But, I want to be clear: that's just the beginning of the conversation… We don’t want the low hanging fruit. We want the fruit that everybody eats from on the top of the tree.”

As the group crossed the Brooklyn Bridge, shutting down traffic to and from Manhattan on the structure, towards City Hall, they were relatively silent, according to Rincon.

View from the Brooklyn Bridge as thousands march across to City Hall. pic.twitter.com/cANadB5kFO

The demonstrators remained peaceful as they crossed the bridge, honoring Floyd, who died after a while officer knelt on his neck for more than eight minutes.

Though the death happened in Minneapolis, protesters and lawmakers in New York City have been met with violence from police, prompting thousands in the five boroughs to demand reforms as well.

Once in Manhattan, the group heard from the families of those who have been killed by police officers, all of them were people of color.

We’ve made it to Manhattan as this march heads to City Hall. pic.twitter.com/onDSUcBvoq

Rincon reports they spoke about the need for reforms – not just to the police department but to education as well.

“It’s very, very important because of the simple fact that it effects everyone, not just black lives,” said Carol Johnson, a professor at Borough of Manhattan Community College.

She says seeing the amount of money allocated to the police department – around $6 billion annually – hurts.

“It’s very painful because I may not have a job in August,” she said.

Johnson is hoping that the money can be diverted from the police department and given to city services that include education.

The City Hall protest was paired with events in Washington Square Park, Pelham Bay Park in The Bronx and the nightly sit-in outside Gracie Mansion.