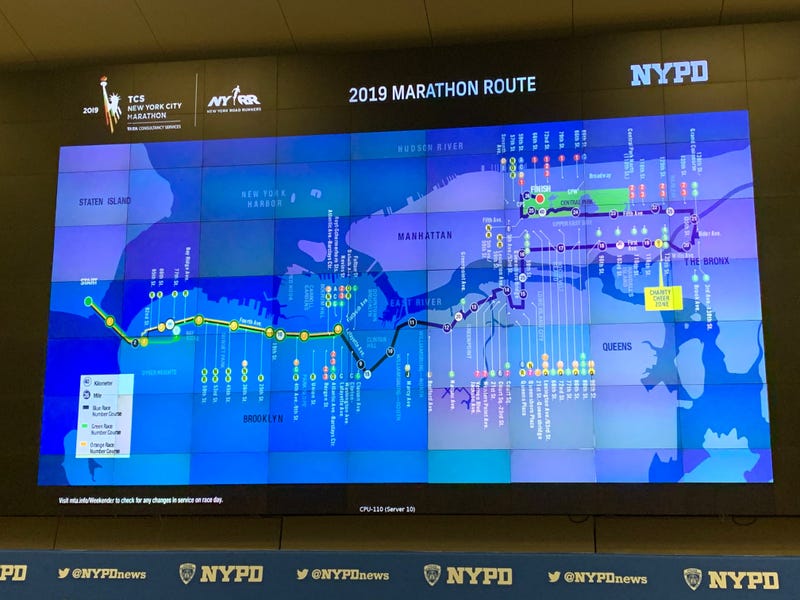 NEW YORK (WCBS 880) – The New York City Marathon is Sunday, and the NYPD is busy implementing a slew of security measures to keep runners and spectators safe during one of the city’s largest annual events.

The NYPD said there are no credible threats against the marathon, but the department is warning attendees to be aware of their surroundings.

Chief of Counterterrorism James Waters says the race will be protected by 100 sand trucks, over 500 blocker vehicles, about 200 concrete blocks and thousands of NYPD officers. There will also be radiological detection boats and heavy weapons teams in addition to security screening.

Thousands of @NYPDnews officers will be monitoring the @nycmarathon Sunday. They'll have drones as well (weather permitting). First road closure is midnight Saturday with the upper level of the Verrazzano Bridge. @wcbs880 pic.twitter.com/7zJ7Zcez4x

All roads running along the 26-mile race will be closed by 8 a.m. Sunday.

“Some roadways will begin closing at midnight the night before the race, including the upper level of the Verrazzano Bridge,” NYPD Chief of Department Terence Monahan said Thursday.

The NYPD is also going to have helicopters and drones monitoring the race from above.

“If you own a personal drove, leave it at home on Sunday. We will be utilizing anti-drone technology,” Monahan said.

President Trump will also be in town this weekend. He’s leaving Sunday, but the NYPD says it has been working with the Secret Service and that there won’t be any conflict with the marathon.

“It's all going to work,” said Deputy Commissioner of Counterterrorism John Miller.