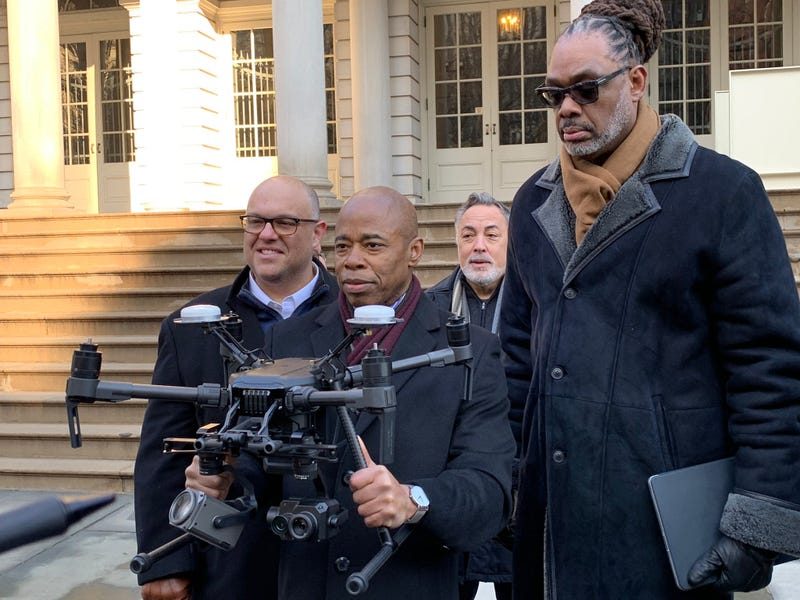 Adams says it’s time for New York to get into the 21st Century.

“How do we move this city forward from being reactive to more proactive,” Adams said at a press conference Sunday.

One way to do that, he says, is with drones, which are currently illegal to fly in the city. He’d like to make an exception for building inspections.

“This technology in the hands of the right people—it’s not a toy, but a tool,” Adams said.

He also criticzed the NYPD, saying they've been reluctant to adopt the new technology.

“It is not a toy, but it’s a tool,” says @BPEricAdams as he pitches the use of drones to inspect city buildings. “They are amazing at what they can do.” @wcbs880 pic.twitter.com/PizNCJVHzY

A new bill in the City Council would require the Department of Buildings to do a drone inspection within 48 hours after a complaint to 311.

Erica Tishman, a 60-year-old architect, died last week after she was hit by a piece of falling debris in Midtown Manhattan.

Records revealed the building was cited back in April for failing to maintain the façade, but repairs were never reported. Beyond a fine, there was never any more followup.

“If this is about a lack of manpower, then we need to get creative,” said City Councilmember Justin Brannan, who also supports the drone idea.

Councilmember Robert Cornegy says officials will get to the bottom of what happened to Tishman at a hearing planned for February.

“We will be drilling down as deeply as you possibly can imagine,” Cornegy said.