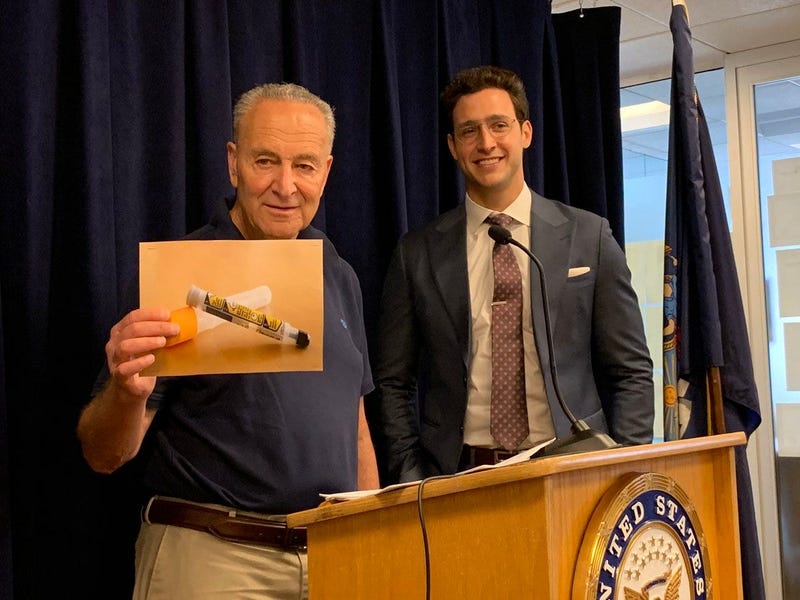 Airlines are required to carry certain medications on board their planes, but EpiPens are not among them.

Dr. Mikhail Varshavski was two hours into his flight from JFK Airport to Tel Aviv when the flight attendant asked if there were any doctors on board. He raised his hand. A man was having an allergic reaction.

“His throat began to close and we had seconds, maybe minutes to act,” Varshavski said.

But he says he was shocked to find the plane didn’t have any EpiPens. He instead had to use epinephrine mean for someone having a heart attack.

“This is way too high of a dose. Had I given him the full syringe instead of spilling half of it on the floor, his heart could’ve stopped,” Varshavski said.

Schumer wants the FAA to reverse course on their policies and stock the life-saving pens.

Airlines have been given an exemption from carrying EpiPens, with lobbyists citing a nationwide shortage. Schumer wants that exemption to end.

“The cost would be about $2 million a year for every airline to have EpiPens,” the senator said at his Midtown office on Sunday.

Schumer says that’s something an industry making billions in profits can afford.

"If it saves lives, which it will, it's more than worth the cost," Schumer said.