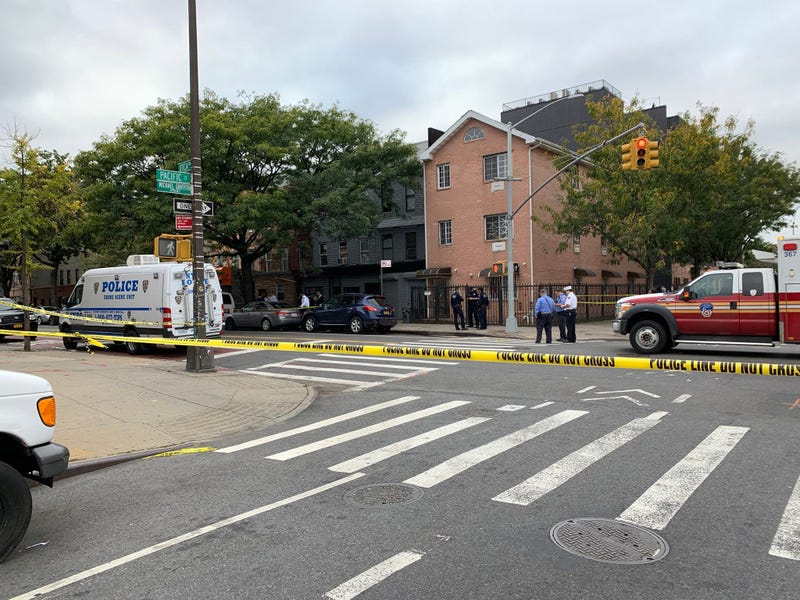 The three people wounded—two men and a woman—were taken to area hospitals and are expected to survive. The ages of those shot range from 32 to 49. An eighth person was injured running from the scene, police said.

At least 7 people were shot, 4 killed in early morning violence at a social club in Crown Heights. @wcbs880 pic.twitter.com/1vVcw2Olly

Shots rang out around 7 a.m. on the first floor of 74 Utica Ave. in Crown Heights, police said. The location is just a few blocks from the 77 precinct stationhouse.

At least 15 people were inside the illegal gambling den at the time of shooting in what Shea described as a “chaotic scene.”

WATCH LIVE as @NYPDDetectives provides an update on this morning's shooting on Utica Avenue in Brooklyn. https://t.co/d8axqMZs75

At least 15 shots were fired and so far two guns—a 9mm handgun and a revolver—have been recovered. Shea said he “wouldn’t be surprised” if more guns were found.

The officers who responded had just made a gun arrest nearby and raced to the shooting scene.

Shea said the location was “sparsely decorated” and had evidence of illegal gambling, including cards and dice. He said there was no evidence of alcohol consumption.

There was a heavy police presence on Utica Avenue Saturday morning as local and federal investigators combed the area for clues.

Several witnesses were being interviewed at the 77 precinct stationhouse.

Police have not announced any arrests in connection with the shooting.

Mayor de Blasio reacted to the shooting on Twitter Saturday.

"Our city awoke to senseless gun violence in Crown Heights that led to four killed and at least three others shot," the mayor wrote. "No two mass shootings are the same, but all of them jar a community’s sense of safety."

I’ve said it before and I’ll say it until I can’t anymore: we have an epidemic of gun violence that spares no community — and it won’t stop until we get guns off our streets once and for all.

"Early this morning, many of us woke up to news of another mass shooting in Crown Heights, the second in the neighborhood the span of a few months and the third since the summer, when the Old Timers’ Day shooting in Brownsville made national headlines," Adams said in a statement. "While we are waiting for all the facts to come in, one thing is clear: We need new tools to combat the surge in gun violence we are seeing in certain precincts across the city, including the 77th."

In a statement, New York Attorney General Letitia James said: "Once again, senseless gun violence in our communities has claimed the lives of several individuals. The shooting this morning in Crown Heights is deeply upsetting, and we hope that those injured will make full and speedy recoveries."