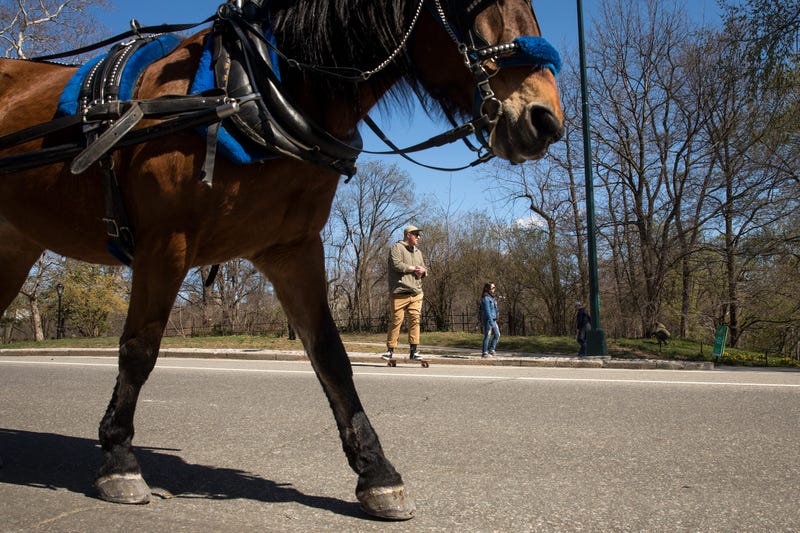 NEW YORK (WCBS 880) – Animal rights advocates held a protest in Central Park on Sunday, a day after a carriage horse collapsed and was later euthanized.

Cell phone video shows the 12-year-old mare named Aisha struggling to stand on a roadway in the park.

Protesters from the group NYCLASS said the horse was tied and dragged into a trailer before being taken to her stable instead of being treated at the scene by a veterinarian.

Edita Birnkrant, the executive director of NYCLASS, released a statement, saying “New York City’s carriage horses are in a crisis.”

“This video is just the latest disturbing piece of evidence we’ve seen showing how poorly these horses are treated and what they go through on these busy city streets,” Birnkrant said in the statement.

💔Massive Central Park NYCLASS DIE-IN to mourn the horse who died so brutally yesterday, and the countless others who will suffer & die as long as horses are forced to pull carriages on NYC streets. “If you love horses don’t take a ride, drivers work them till they die!” pic.twitter.com/xCHb8lIpIU

Historic Horse-Drawn Carriages of Central Park, a trade group, said in a statement to the New York Post that the horse likely died of cardiac distress. The group said that proper protocols were followed but the horse had to be humanely euthanized.

“This medical emergency appears to be something that could happen to any horse… under a wide variety of conditions,” the association said. “Unfortunately, despite doing everything we could for this horse, we did not get the outcome we hoped for, and are left wondering what happened.”

Mayor Bill de Blasio, who unsuccessfully tried to get carriage horses banned in the past, said the NYPD’s Animal Cruelty Squad is investigating the incident.

“The video of a horse collapsing and dying in Central Park yesterday is painful and says so much about a persistent problem,” the mayor wrote.

The video of a horse collapsing and dying in Central Park yesterday is painful and says so much about a persistent problem.

We’ve made real progress in animal welfare but we must go further. The NYPD’s Animal Cruelty Investigation Squad is on the case and WILL get answers.