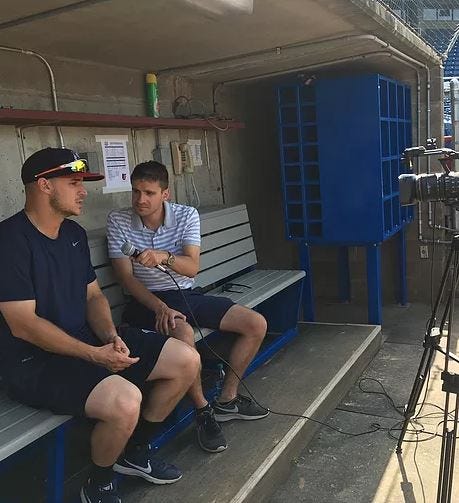 He’s in his first season as the Mets Double-A radio voice for Binghamton, but in one respect Jacob Wilkins’ baseball play-by-play career already has come full circle.

As a kid, the East Meadow, Long Island native would tape himself calling games in the stands at Yankee Stadium, with his father, Andy, serving as analyst. The former partners recently reunited in Binghamton’s booth during an inning of a Rumble Ponies broadcast, when Andy and Wilkins’ mother, Natalie, were visiting their son in upstate New York.

“I just told him, ‘I’m just glad you didn’t get me fired,’” joked Wilkins, 31. “For him to now be on the broadcast that I’m doing professionally was very cool.”

The team’s prior play-by-play announcer, Tim Heiman, left early this season for a job in engineering, when Wilkins was quickly summoned from the broadcast bullpen. Within just a few days, Wilkins went from being contacted about the job to becoming Binghamton’s lead voice and Director of Broadcasting and Media Relations.

“It’s been just as much fun as I imagined and gratifying,” Wilkins said.

After rushing to Binghamton for the gig with no place yet to live, Wilkins says Heiman was very helpful giving him a crash course before leaving.

“He put me on the bus to Portland, where we had six games in four days coming up and away we went,” Wilkins said.

Previously the voice of the Hudson Valley Renegades, the Rays’ Class-A affiliate, Wilkins has done play-by-play of women’s basketball and other sports for Stony Brook University, Manhattan College and LIU-Brooklyn. He also has been a sports anchor for New York City radio stations like WFAN and on Sirius-XM. Yet Wilkins’ says his professional calling is, well, calling baseball.

Double-A players are only two levels from the major leagues, but Wilkins isn’t viewing his career similarly, at least for now.

“I’m certainly not at that stage yet because I’m really enjoying the job on a day to day basis,” Wilkins said. “I love baseball play-by-play and wanted to be doing it consistently. In terms of major league goals, that’s down the road for me. You can’t get promoted anywhere if you’re not doing a good job at the job you currently have.”

Shortly after settling behind the mic, Wilkins called Binghamton’s combined no-hitter May 8 by Harol Gonzalez and Ryder Ryan during a 7-0 win over Harrisburg.

No-hitter! Harol Gonzalez and Ryder Ryan combine for the sixth no-no in @RumblePoniesBB franchise history, and the first since 2006. Listen to @JacobWilkins call the final out: pic.twitter.com/sgkFpja42e

“I didn’t expect as much attention as it got,” Wilkins said of his call. “I think because it was the franchise’s first in 13 years. And also the Mets fan base and passion for it really blew me away.”

After initially working solo, Wilkins now teams with Ian Sacks on the broadcasts and beyond. Wilkins also is responsible for handling game notes, stats and media interview requests. He says he attends batting practice almost daily, mainly to show a presence.

Especially because he arrived after the season started, “With the players it took time to develop trust,” Wilkins said. “I just think that’s the biggest thing. The long hours don’t bother me. It flies by. And I like the people I work with, fortunately.”

Indeed, when Wilkins was briefly away from the team, he learned he’d already become more a part of it than he realized.

“When I took a weekend off I got ragged on by a lot of the guys,” Wilkins said.

Once per series, Wilkins interviews Binghamton manager Kevin Boles, and he chats with a player for each pre-game show. This season he has interviewed 7 Line founder Darren Meenan and ex-Mets skipper Terry Collins, now a special assistant to Mets general manager Brodie Van Wagenen. Wilkins says he has learned a lot in a short time about his role and the players.

“I always come into it with a respect that they can do something that I can only dream of doing,” Wilkins said. “Hitting a ball 300 or 400 feet. And I also don’t underestimate the pressure that is on them as being one of the elite players in the game, and trying to be one of the really elite players getting to the major leagues.”

Local media requests go through Wilkins, who coordinates inquiries from other outlets with the Mets public relations staff in New York.

Binghamton hosts next year’s Eastern League All-Star Game, and Wilkins says he already has had conversations with team brass about returning to Binghamton’s booth. He says he has looked into offseason work in the area, hoping to live and work locally year round.

“I’m excited to come back for next year,” Wilkins said.

No-hitter aside, Wilkins says this season’s highlight has been sharing the airwaves with his dad, particularly considering their father-son pairing in the Bronx years ago was short lived.

“I think I fired him pretty quickly as my color commentator,” Wilkins joked. “What kid in their teens wants their dad being involved in anything that’s perpetuity?”