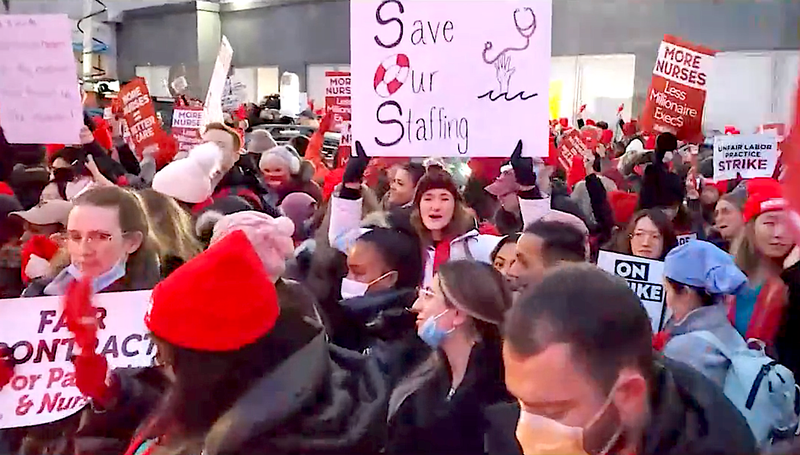 Nurses protest over pay and staffing outside Mount Sinai Hospital in Manhattan on Monday morning. Photo credit Darius Radzius
By The Associated Press

NEW YORK (AP/WCBS 88) — Nurses at two of New York City's largest hospitals went on strike Monday in a dispute over pay and staffing levels after a weekend of negotiations that didn't produce a deal for a new contract.

As many as 3,500 nurses at Montefiore Medical Center in the Bronx and about 3,600 at Mount Sinai Hospital in Manhattan were off the job. Hundreds picketed, some singing the chorus from Twisted Sister’s 1984 hit “We’re Not Gonna Take It,” outside Mount Sinai. It was one of many New York hospitals deluged with COVID-19 patients as the virus made the city an epicenter of deaths in spring 2020.

The New York State Nurses Association, which represents the workers, said it was being forced into the drastic step because of chronic understaffing that leaves them caring for too many patients.

“Nurses don't want to strike. Bosses have pushed us to strike by refusing to seriously consider our proposals to address the desperate crisis of unsafe staffing that harms our patients,” the union said in a statement late Sunday.

NURSES STRIKE -- They have flooded the sidewalks and street here at @MountSinaiNYC as they begin their strike after failed negotiations overnight. #1010WINS pic.twitter.com/aYHiO17trU

The hospitals have been getting ready for a walkout by transferring patients, diverting ambulances to other institutions, postponing nonemergency medical procedures and arranging to bring in temporary staffing.

Gov. Kathy Hochul urged the union and the hospitals late Sunday to take their dispute to binding arbitration.

Montefiore's administration said in a statement that it was willing to let an arbitrator settle the contract “as a means to reaching an equitable outcome.”

NURSES ON STRIKE -- More than 7K nurses at @MontefioreNYC & @MountSinaiNYC walk out after overnight negotiations failed before the 6am deadline. They want a pay increase and better staffing. @GovKathyHochul @KathyHochul tried to avert a strike & called for arbitration. #1010WINS pic.twitter.com/ifuLWpJRGm

The union didn't immediately accept the proposal. In a statement, it said Hochul, a Democrat, “should listen to the frontline COVID nurse heroes and respect our federally-protected labor and collective bargaining rights.”

Montefiore and Mount Sinai are the last of a group of hospitals with contracts with the union that expired simultaneously. The Nurses Association had initially warned that it would strike at all of them at the same time — a potential calamity even in a city with as many hospitals as New York. 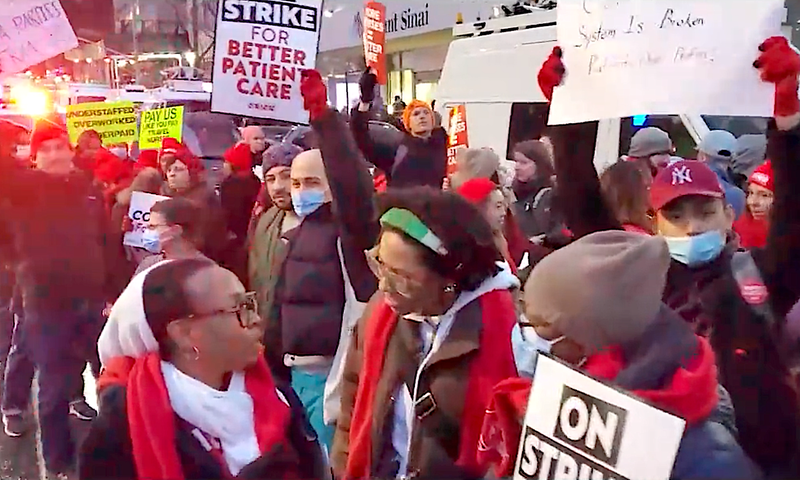 But one-by-one, the other hospitals struck agreements with the union as the deadline approached.

Nurses at New York-Presbyterian Hospital ratified a deal Saturday that will give them raises of 7%, 6%, and 5% over the next three years while also increasing staffing levels. That deal, which covers 4,000 nurses, has been seen as a template for the negotiations with other hospital systems. 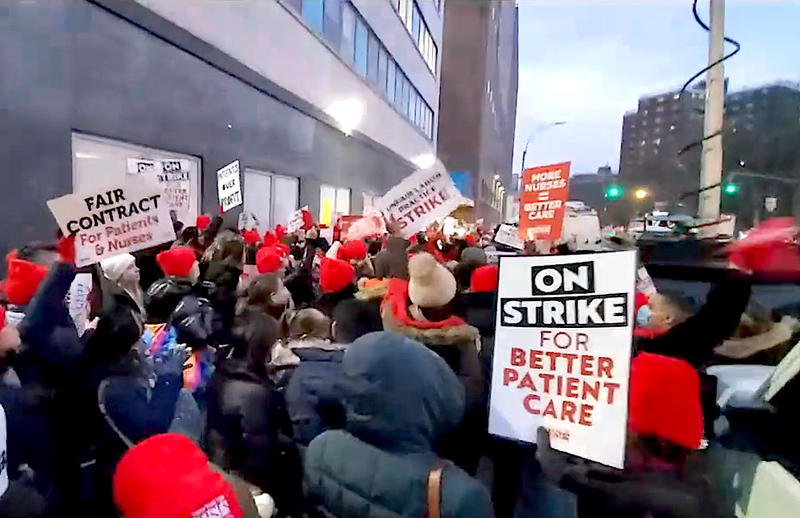 The hospitals have been getting ready for a walkout by transferring patients, diverting ambulances and postponing nonemergency medical procedures. Photo credit Darius Radzius

Nurses at two facilities in the Mount Sinai system also tentatively agreed to contracts Sunday. But negotiations continued at the system's flagship hospital on Manhattan's east side.

The hospitals said they had offered the same raises — totaling 19% over three years — that the union had accepted at several other facilities where contract talks reached tentative agreements in recent days.

Montefiore said it had agreed to add 170 more nurses. Mount Sinai’s administration said the union’s focus on nurse-to-patient ratios “ignores the progress we have made to attract and hire more new nurses, despite a global shortage of healthcare workers that is impacting hospitals across the country.”

The hospitals said Monday that they had prepared for the strike and were working to minimize the disruption.

“We remain committed to seamless and compassionate care, recognizing that the union leadership’s decision will spark fear and uncertainty across our community,” Montefiore said. “This is a sad day for New York City.”

In a statement, Mayor Eric Adams noted nurses’ “heroic actions during the peak of the COVID-19 pandemic” and said his office was “encouraged that most of New York City hospitals have reached tentative agreements.” He encouraged “all of the parties remain at the bargaining table for however long it takes to reach a voluntary agreement.”

The mayor said his office is in regular communication with the unions, hospital systems and state partners “to ensure New Yorkers continue to receive care.”

NYC Emergency Management was set to activate its situation room to monitor hospital operations citywide. The FDNY has contingency plans in place to reroute ambulance and city hospitals have “emergency strategies to handle a surge in patients,” the mayor said. 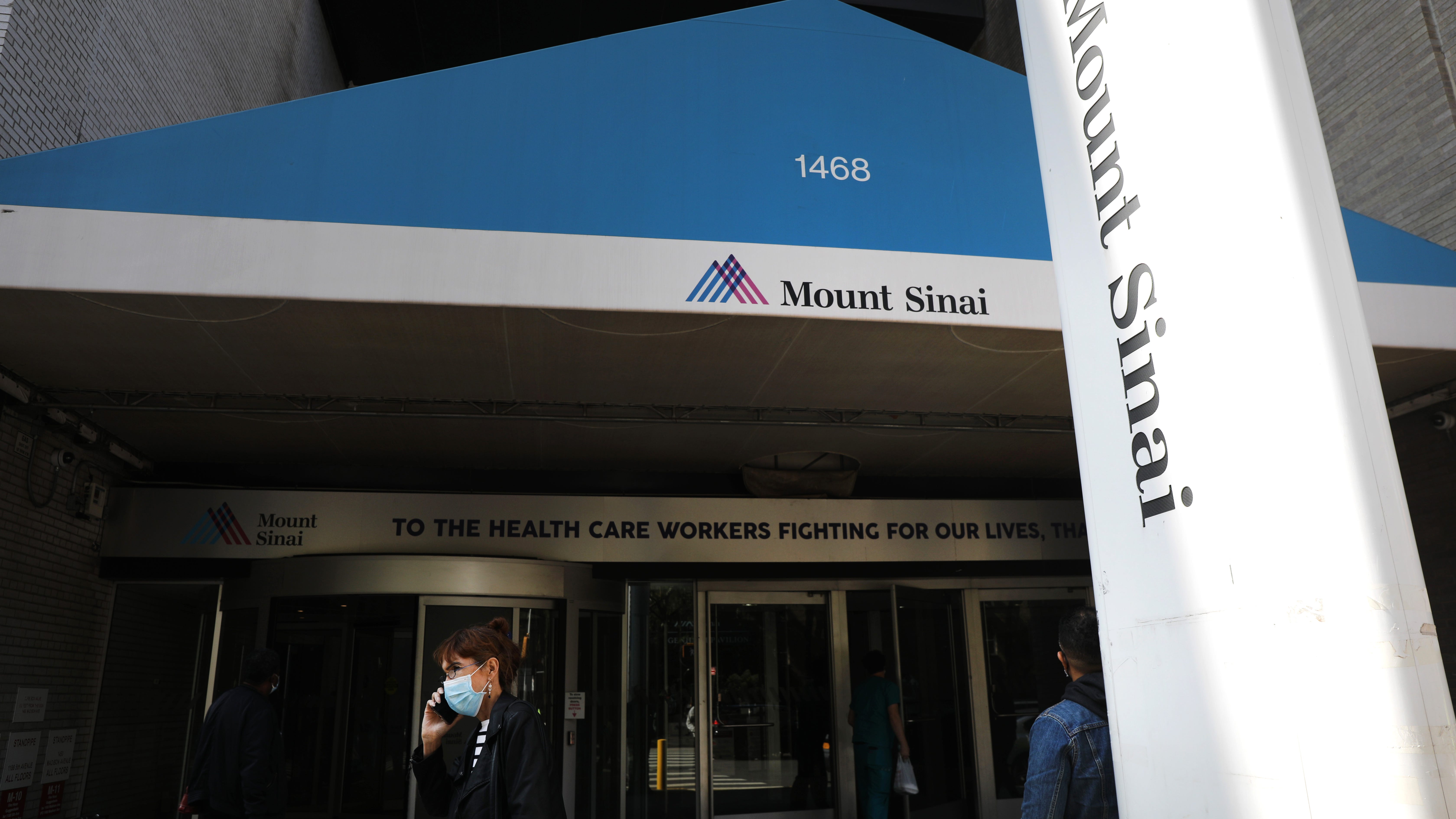