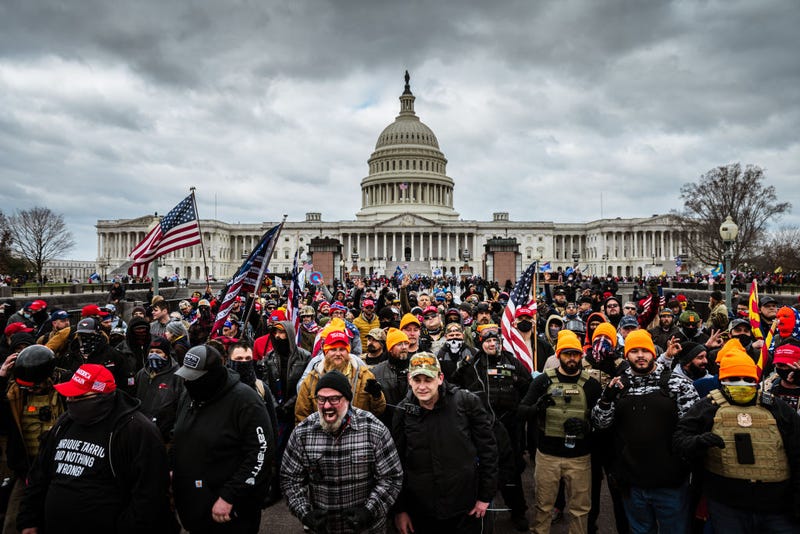 NEW YORK (1010 WINS) — Hundreds of New Jersey residents — including current and former law enforcement officers — are members of the far-right extremist Oath Keepers group, according to a report.

An analysis of hacked membership rolls by WNYC/Gothamist found more than 500 people with New Jersey addresses listed in the data. Dozens of law enforcement officers, as well as other first responders, have joined the anti-government militia over the past decade, the analysis found.

Officials are more tightly scrutinizing the Oath Keepers after the group’s presence at the Jan. 6 U.S. capitol insurrection. The militia has claimed to have more than 30,000 dues-paying members and is considered an extremist group by the Southern Poverty Law Center and the Anti-Defamation League.

The analysis comes after WNYC/Gothamist revealed active NYPD members were listed in the data as Oath Keeper members, prompting an investigation by Mayor Bill de Blasio.

The membership rolls do not include information on involvement, though several contacted by WNYC/Gothamist claimed they had signed up at one point but never participated in events or were no longer actively involved in the organization.

New Jersey elected officials condemned the group to the outlet Wednesday. The state’s Attorney General’s office said it would evaluate whether reforms were needed to ensure law enforcement officers weren’t engaging in groups that impede the ability to serve the public.

“To build and maintain the trust of the communities they serve—especially vulnerable communities that have been targeted by hate groups in the past—it is imperative the ranks of our law enforcement be free of bias and hate,” a spokesperson for Acting New Jersey Attorney General Andrew Bruck told the outlet.