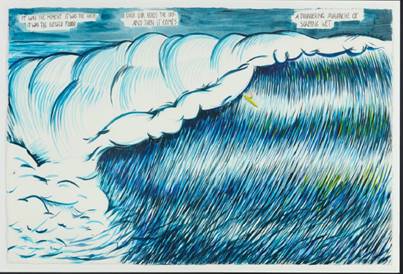 Untitled (“It was the Moment . . . ”), 2013, 100 cm by 155 cm, one of the forged paintings Weinberger allegedly sold. Photo credit U.S. Attorney’s Office Southern District of New York
By Vincent Barone

NEW YORK (1010 WINS) — Feds busted a man for allegedly selling hundreds of thousands worth of forged paintings from Raymond Pettibon — the contemporary artist who rose to prominence for the imagery he created for the band Black Flag.

Christian Rosa Weinberger, 43, of Los Angeles, allegedly worked with others to forge and sell five forged Pettibon paintings from the artist’s popular, surfer-inspired "Wave Series” between 2017 and 2020 — using the sale of one of the paintings to help pay off his LA home.

Weinberger, a contemporary artist himself who goes by Christian Rosa, is a Brazilian-born painter known for his sparce abstract works.

“Weinberger swindled buyers out of hundreds of thousands of dollars, and risked a New York artist’s legacy, through his forgery scheme,” said U.S. Attorney Damian Williams. 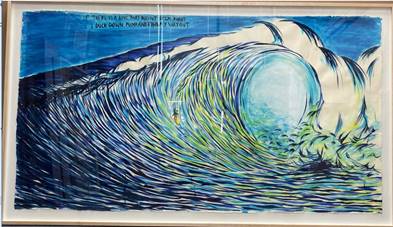 Weinberger allegedly forged the Pettibon paintings and faked their certificates of authenticity. He remains at large after fleeing the country earlier this year shortly after the forgery accusations hit the press, prosecutors said.

Artnet News reported in January that it appeared Weinberg had allegedly obtained one of Pettibon's unfinished paintings, finished it and sold it as if it were an untouched work from the artist.

“The beauty of art may be in the eye of the beholder, but the behavior we allege today is objectively ugly,” said FBI Assistant Director Michael J. Driscoll. "Quite simply, it's a federal crime to defraud investors and fake documentation of artwork provenance.”