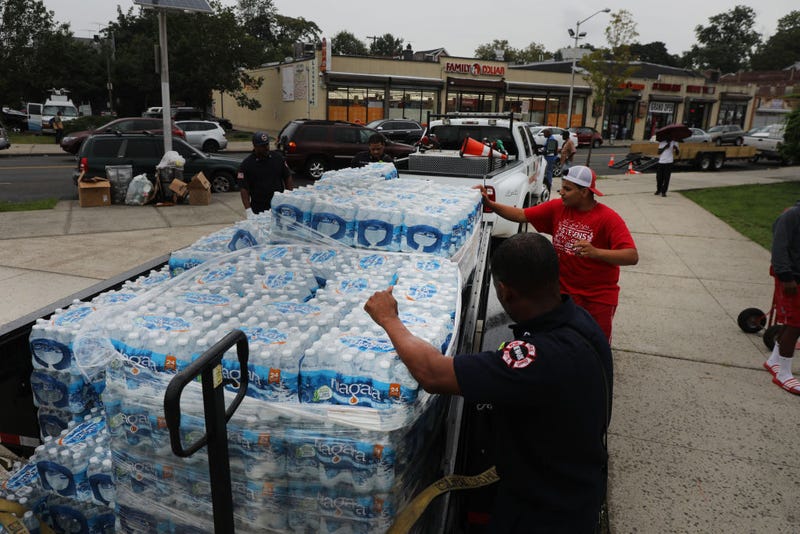 Water that has to be destroyed because of a passed expiration date is loaded onto a trailer for removal outside a recreation center on August 13, 2019 in Newark, New Jersey. Photo credit Spencer Platt/Getty Images
By Peter Haskell

NEWARK, N.J. (WCBS 880) — The city of Newark on Tuesday reached a settlement with residents regarding dangerously high levels of lead in water pipes.

He notes the settlement will ensure every lead pipe is replaced and there will be free testing filters.

Olson says the situation in the city was dire.

“Newark, when we initially brought this case, had among the highest levels of lead in the country,” he said.

The issue came to a boil in 2018, when Yvette Jordan sued the city with a group of her fellow teachers.

“My home was tested, and it was almost three times the federal acid level,” she said.

Jordan says as a resident and a teacher, she was worried about how lead levels in the water could affect the residents of Newark, especially children.

“Lead damages children’s brains, which is why our group of public school teachers brought this case to secure safe drinking water for families in Newark,” she said in a statement.

Jordan says at the time, many people thought that filters on their faucets could reduce the amount of lead in their drinking water – but it wasn’t that simple.

“You've got to change the cartridge in the filter, so it's not as easy as ‘Oh, I’ll get a filter and just leave it on there,’” she said.

After the lawsuit was filed, the city of Newark agreed to replace 18,000 lead service lines and most are already completed.

The settlement on Tuesday requires the city to finish replacing the pipes and ensure critical health protections for residents.

Olson says while the changes lock in the repairs for Newark, he wants to see it become the standard all over the country.

“That aggressive lead service replacement program could be a model nationally,” he said, noting there could be 10 million lead lines in the United States.