By Adam Warner and Steve Burns

NEW YORK (WCBS 880) -- Gov. Andrew Cuomo announced Saturday that New York was doing away with its quarantine list and moving to a new testing policy for people arriving in the state.

“There will be no quarantine list,” Cuomo said, adding that it had become too unwieldy, with more states on it than not on it. "There will be one rule that applies across the country." 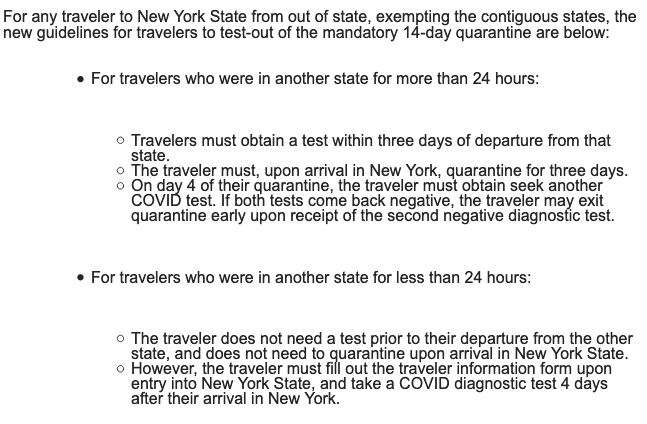 The governor said under the new rule, people coming to New York from out of state must have proof they’ve tested negative in the three days before their arrival.

They also must quarantine for three days upon arrival and then take a test on the fourth day. If that test is also negative, then that person is released from quarantine. If the test is positive, then they must remain in quarantine.

If someone chooses not to get tested, then they must stay in quarantine for 14 days.

If your trip out of NYS lasts less than 24 hours, you don't have to quarantine but still have to take a test four days later, Cuomo says

“So the mandatory quarantine is actually three days upon arrival. You can take a test on the fourth day, test says you’re negative, that’s that,” Cuomo said.

The new policy applies to travel from every state except the contiguous states bordering New York, including New Jersey and Connecticut.

New Yorkers who travel outside the state for less than 24 hours don’t have to quarantine but must take a test within four days of their return. If the test says they’re positive, then they must stay in quarantine.

The test positivity rate in the focus areas under NY's Micro-Cluster strategy is 3.01%.

The statewide positivity rate excluding these focus areas is 1.30%.

We continue to take strong action to respond to outbreaks and to stop the spread.

Hospitalizations were at 1,121, an increase of 36 patients. Of those, 248 patients were in intensive care and 122 were intubated.

music
Drake to be crowned 'Artist of the Decade' at the 2021 Billboard Music Awards
music
Adam Sandler reunites with IHOP employee for ‘Milkshake Monday’
music
Billie Eilish has seen your comments on her 'Vogue' photos, and it makes her wanna post less
music
The Weeknd and The Cop from The Village People is the feud we didn't see coming
music
Joshua Bassett confessed Harry Styles is 'hot' and everyone thinks it's a plot twist
music
Blake Shelton admits this might be the first superstar in 10 years of 'The Voice'