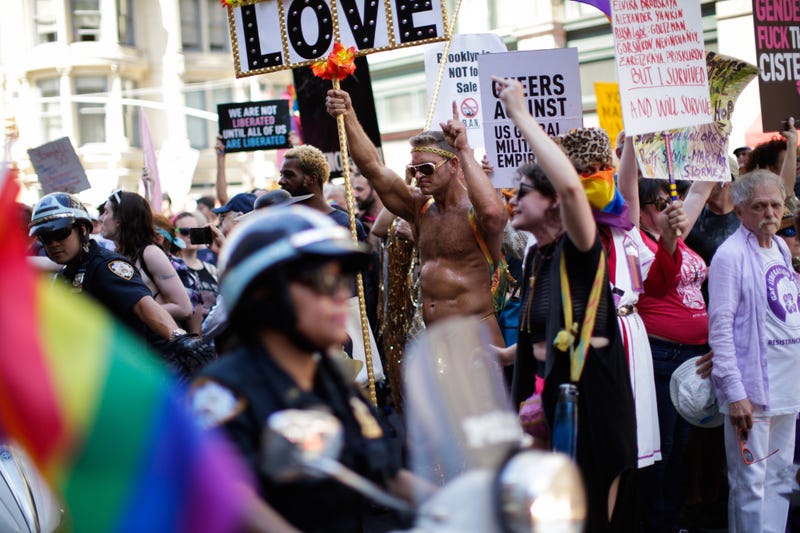 Activists shout slogans at police during the Queer Liberation March on June 30, 2019 in New York City. The march marks the 50th anniversary of the Stonewall riots in the Greenwich Village neighborhood of Manhattan on June 28, 1969, widely considered a watershed moment in the modern gay-rights movement. The Queer Liberation March, organized by the Reclaim Pride Coalition, began as a protest of the much larger NYC Pride March, which some have accused of being too corporate-sponsored and too strict on participation requirements. Photo credit Kena Betancur/Getty Images
By Curtis Brodner

NEW YORK (1010 WINS) -- Pride Month is full of celebrations of LGBTQ+ life in New York City, but there are also organizations carrying on the work of the Stonewall Riots and radical queer activism of the 60s and beyond.

Below are some such protests:

The protest is organized by Blasian March, a group that first formed in October 2020 to memorialize Jennifer Laude — a trans Filipina woman killed by U.S. Marine Joseph Scott Pemberton.

According to the group’s mission statement, “The Blasian March is a solidarity action between Black/African, Asian and mixed Blasian communities. This is achieved through education on parallel struggles with white colonial settler violence and mutual celebration across the aforementioned peoples.”

If the Zami Pride Beach Day takes place this year, which isn’t a guarantee due to recent increases in COVID-19 rates, it will be the first event under that name organized by the Audre Lorde Project.

The organization aims to use education and direct action to work toward community wellness, social justice and economic justice.

The Zami Pride event looks to combine those organizational goals with a celebration at the city’s gayest beach.

In the past, the Audre Lorde Project has hosted an annual Day of Trans Action at Washington Square Park in late June. The event went on hiatus after COVID-19 hit in 2020. 1010 WINS has reached out to the group about whether or not the event will happen this year. 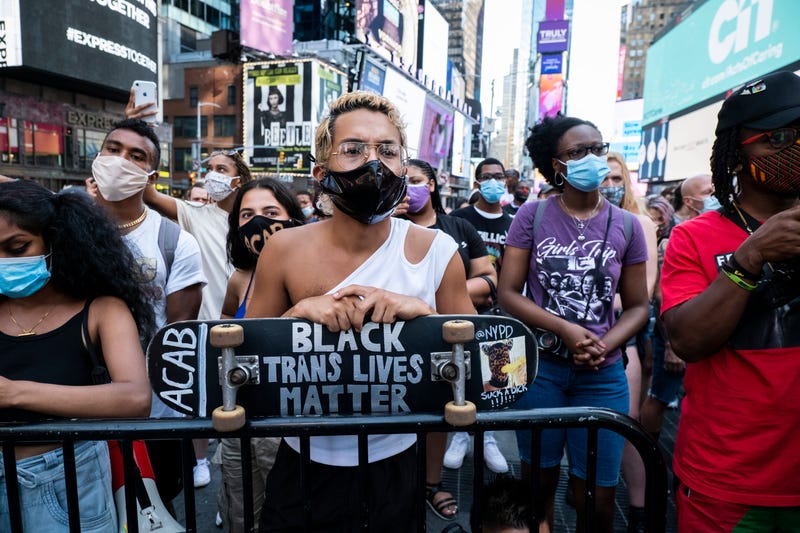 A protester wearing a mask holds a skateboard say, "Black Trans Lives Matter" in Times Square New York in support of Black Women. On July 28, 2020 Nikki Stone a homeless transgender woman was abducted off the streets and taken onto an unmarked van and arrested. This non-violent protest was a March for Black Womxn which started at Times Square and walked through Manhattan. This is days after Portland and other cities have seen federal agents have taken protesters and put into unmarked vehicles while others have been beaten and pepper sprayed. Protesters continue taking to the streets across America and around the world after the killing of George Floyd at the hands of a white police officer Derek Chauvin that was kneeling on his neck during for eight minutes, was caught on video and went viral. During his arrest as Floyd pleaded, "I Can't Breathe". The protest are attempting to give a voice to the need for human rights for African American's and to stop police brutality against people of color. They are also protesting deep-seated racism in America. Photo credit Ira L. Black/Corbis via Getty Images

The Rally
Friday, June 24, 4 p.m. at the Battery at State Street and Battery Place, Manhattan

The Rally is an annual event that commemorates a Gay Power rally that took place a month after the Stonewall Riots.

It’s back in-person this June after two years online due to the pandemic.

The Rally is organized by NYC Pride, the group that organizes the annual Pride March. NYC Pride brands The Rally as more activism-oriented than the parade.

Speakers include a number of LGBTQ+ activists and advocacy workers.

The Dyke March is a protest against discrimination, harassment and violence for “any person who identifies as a dyke.”

The annual march takes place the day before the Pride March, intentionally contrasting itself against the corporate and politically-safe backdrop of the parade. 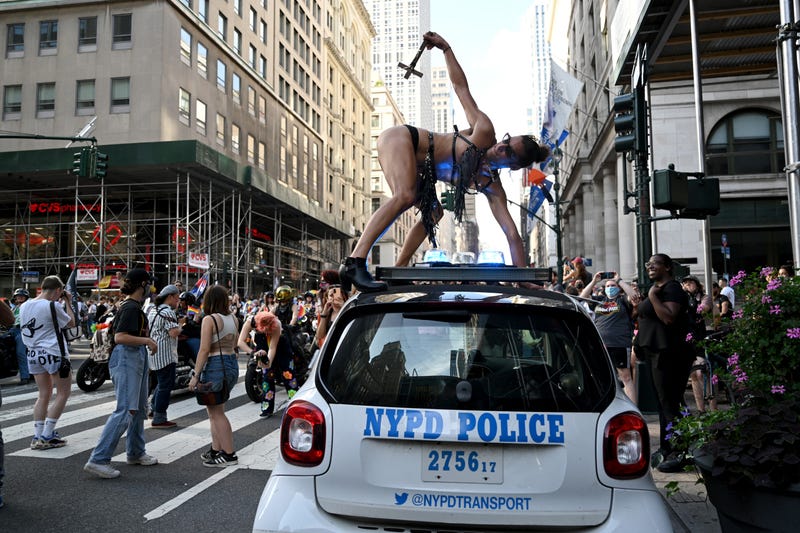 Mary Magdalene dance on top of an NYPD police car during the 29th Annual New York City Dyke March on June 26, 2021 in New York City. The Dyke March which calls itself a march protest, rather than a parade, is a "demonstration of our First Amendment right to protest" according to their website. Due to the coronavirus pandemic the march was held virtually in 2020. This year’s march began at Bryant Park and ended in Washington Square Park. Photo credit Alexi Rosenfeld/ Getty Images

“The March is a demonstration of our First Amendment right to protest and takes place without permits or sponsors,” wrote the protest’s organizers on the march’s website. “We recognize that we must organize among ourselves to fight for our rights, safety, and visibility.”

The protests will march from Bryant Park down Fifth Avenue to Washington Square Park.

The Queer Liberation March is an annual protest intentionally scheduled to conflict with the Pride March.

Reclaim Pride, the group that organizes the protest, bills itself as an anti-corporate, anti-police alternative to the parade.

“We present our March as the antidote to the corporate-infused, police-entangled, politician-heavy Parades that now dominate Pride celebrations in a grotesque expression of societal forms of marginalization and oppression for Queer and Trans people,” wrote the organizers on Reclaim Pride’s website. “Enough is Enough; ‘Off of the sidelines and onto the streets.’”

The parade will march up Sixth Avenue, following the original route of the 1970 Pride March that was organized to commemorate the 1969 Stonewall Riots.

The annual Pride March started as a protest on the one year anniversary of the Stonewall Riots, but over time the event has morphed into a city sanctioned parade complete with lots of day drinking, corporate sponsorship and marching elected officials.

The 50th Anniversary of the Stonewall Riots in 2019 sparked a wave of criticism from LGBTQ+ activists who said police participation in the parade dishonored the sacrifices of the Stonewall rioters who fought police.

The nationwide protests against police violence following the murder of George Floyd in 2020 amplified calls for NYC Pride to distance itself from police.

During the 2020 parade, NYPD officers assaulted and pepper sprayed participants in the march.

On the anniversary of the start of the Stonewall riots, the NYPD is attacking LGBTQ people who are marching for Pride. Let that sink in. https://t.co/j4ZL4jMHsa

At 11pm on @NBCNewYork, a #Pride weekend demonstration ends with police confrontations and pepper spray. We ask #NYPD what prompted this officer to push a bike-riding protester? pic.twitter.com/8XRRNHnrpK

The parade’s organizers banned police from marching in uniform or recruiting at the event for the first time in 2021.

NYPD threatening to arrest one for unlawfully blocking sidewalk pic.twitter.com/jzN5wVmlcF

Uniformed cops are still banned from marching in 2022.

This year, the parade will be led by a “resistance contingent” made up of local activist groups. Corporate sponsors and elected officials will be barred from this section.

It’s clear NYC Pride is trying to reconcile the tension between it’s dueling identities as a corporate-friendly party and a radical protest, but, as clashes with police demonstrated for the past two years, the decisions of marchers and law enforcement will ultimately determine to what degree the march is a protest. 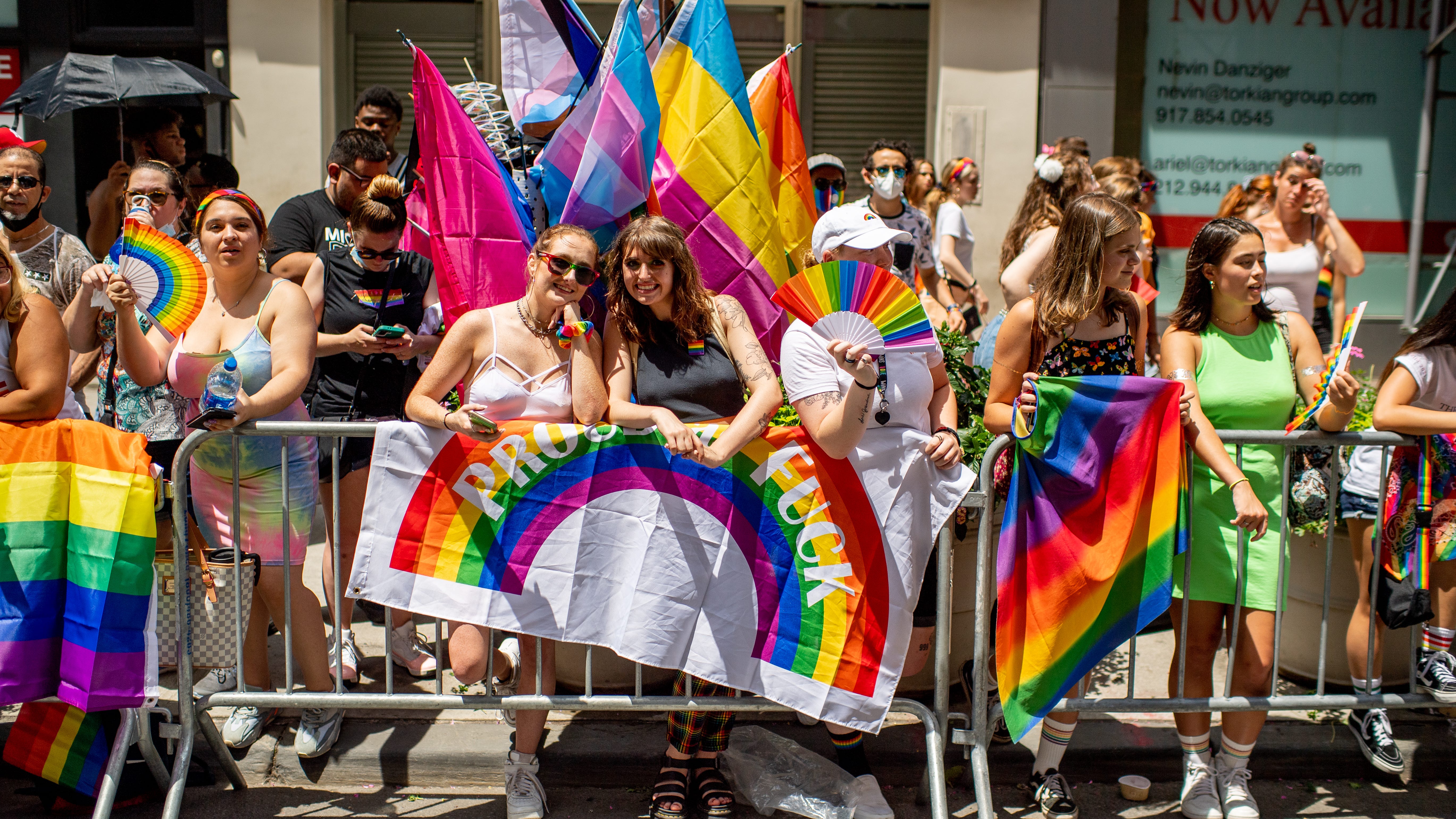 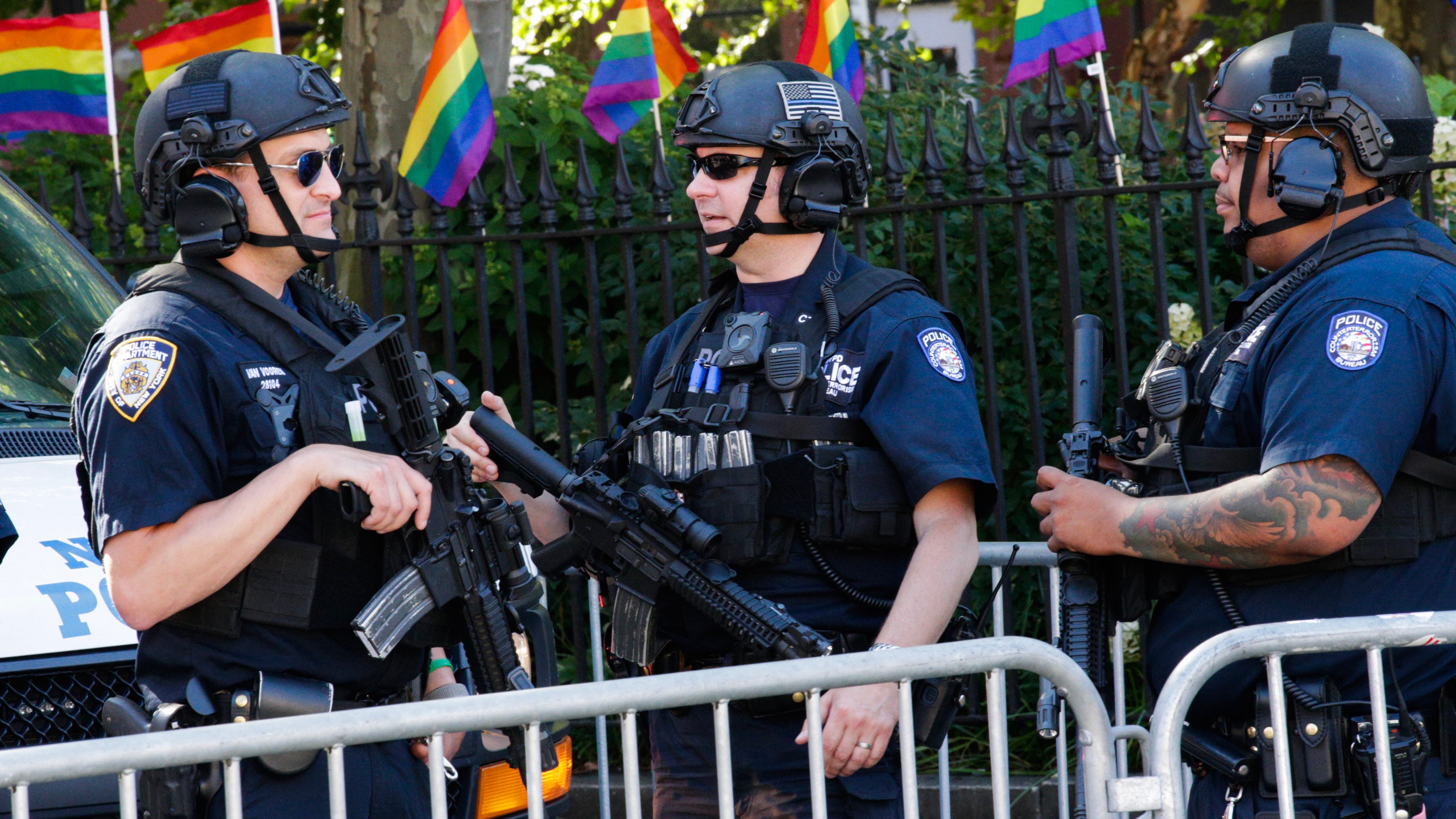